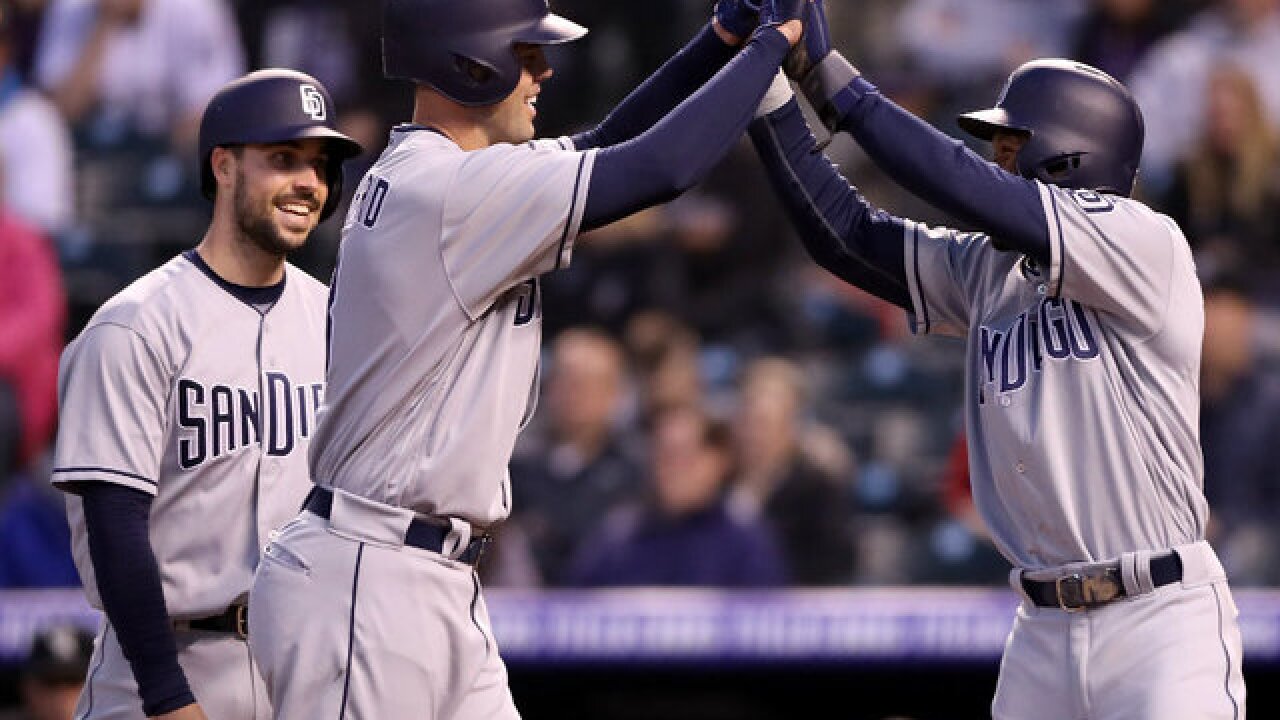 Copyright Getty Images
Matthew Stockman
Clayton Richard #3 of the San Diego Padres is congratulated at the plate by Austin Hedges #18 and Manuel Margot #7 after hitting a 3 RBI home run in the fourth inning against the Colorado Rockies at Coors Field on April 9, 2018 in Denver, Colorado.

Richard connected for his third career homer as part of a five-run fourth inning, driving the first pitch he saw from Jon Gray (1-2) above the Rockies bullpen in right-center. Carlos Asuaje followed Richard with a home run, the second time this season the Padres have gone deep in successive at-bats.

Richard (1-1) allowed four runs in five innings. Brad Hand struck out the side in the ninth for his third save.

It's mandatory that we use #PitchersWhoRake here.

Ian Desmond, Chris Iannetta and Gonzalez homered for the Rockies. Gonzalez's two-run drive came in the sixth off Jordan Lyles, pulled the Rockies within 7-6 and led to the ejection of Padres manager Andy Green.

Left fielder Cory Spangenberg made a leaping attempt at the wall and actually had the ball in his glove for an instant, even as a fan tried simultaneously to make a barehanded catch. The fan appeared to make some contact with the glove but backed his hands away as Spangenberg dropped back to the ground.

Spangenberg's dangling glove hit the top of the wall and the ball bounced out, dropping into the stands. The homer was upheld on replay review, and Green was ejected after vehemently arguing over what he saw as fan interference.

Gray opened impressively, striking out the side in the first, but then quickly got into trouble. He gave up four singles around a double play, including Manuel Margot's RBI hit in the second, and was tagged for five runs in the fourth.