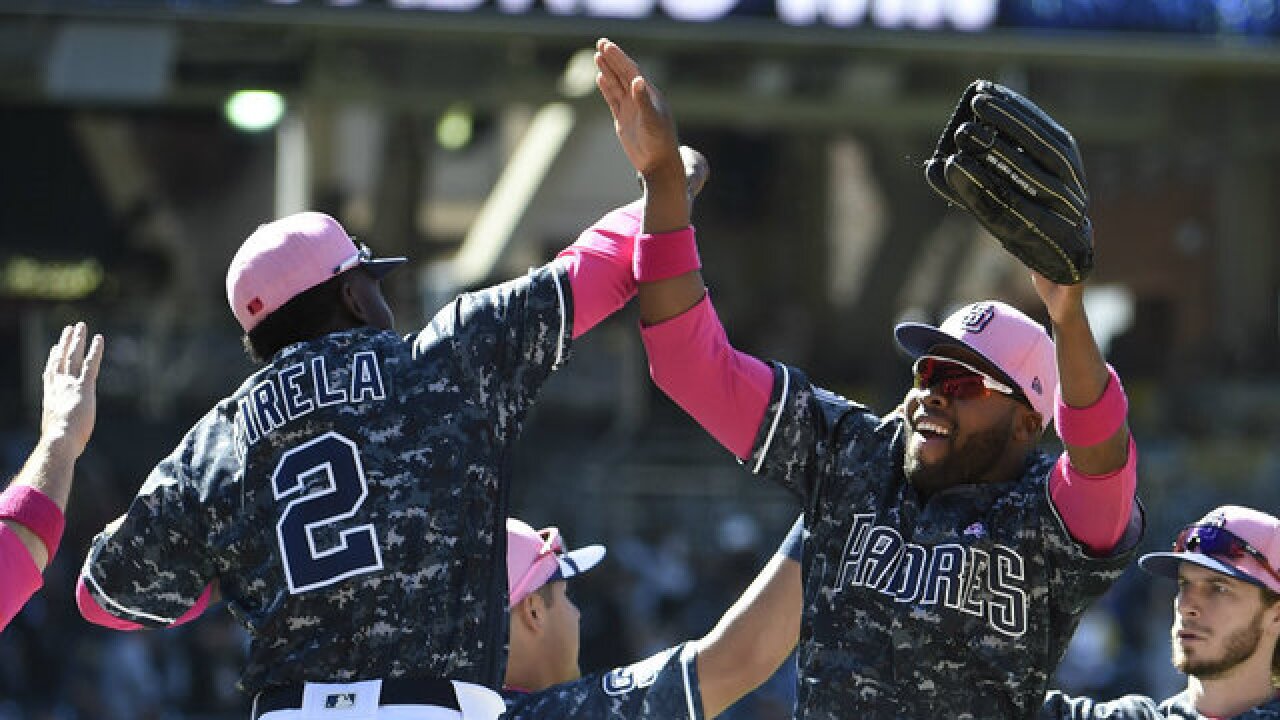 Copyright Getty Images
Denis Poroy
Jose Pirela #2 of the San Diego Padres, left, and Manuel Margot #7 celebrate after beating the St. Louis Cardinals 5-3 in a baseball game at PETCO Park on May 13, 2018 in San Diego.

SAN DIEGO (AP) - Clayton Richard matched his career high with 10 strikeouts in eight strong innings for his first win in more than a month, and the San Diego Padres beat struggling Adam Wainwright and the St. Louis Cardinals 5-3 on Sunday to salvage a split of their four-game series.

Richard (2-5) held the Cardinals to two runs and five hits while walking only one to win for the first time since April 9 at Colorado. He then had a no-decision and four straight losses.

Richard has been plagued by poor run support, with the Padres scoring no runs for the big left-hander in four of his previous eight starts. Included was his last start, when he pitched three-hit ball for eight innings and struck out eight but lost 4-0 to Washington.

Richard got enough backing Sunday thanks to Wainwright's wildness. The 36-year-old right-hander was activated from the 10-day disabled list after a bout with right elbow inflammation and walked six in just 2 1/3 innings, throwing 79 pitches. He allowed two runs on three hits and struck out three.

Richard got into trouble only in the sixth, when he walked Tommy Pham and then allowed an RBI triple by Harrison Bader and an RBI single by Jose Martinez.

Wainwright (1-3) threw 33 pitches in the first inning, loading the bases with two outs on a single and two walks, but didn't yield any runs.

He wasn't as lucky in the third. He walked the bases loaded with one out and then allowed a single by Cory Spangenberg and was pulled in favor of John Gant. Freddy Galvis followed with a sacrifice fly.

The Padres added on in the fourth with three hits against Gant, with Jose Pirela hitting an RBI double and Franchy Cordero following with an RBI single.

Brad Hand struggled through the ninth for his 11th save in 13 opportunities. Hand allowed Bader's leadoff homer, his third, and then loaded the bases with one out, on two walks and a hit batter. He struck out Carson Kelly and Kolten Wong to end it.