Aztecs down Fresno State, 64-52, move onto semifinals of MW tournament 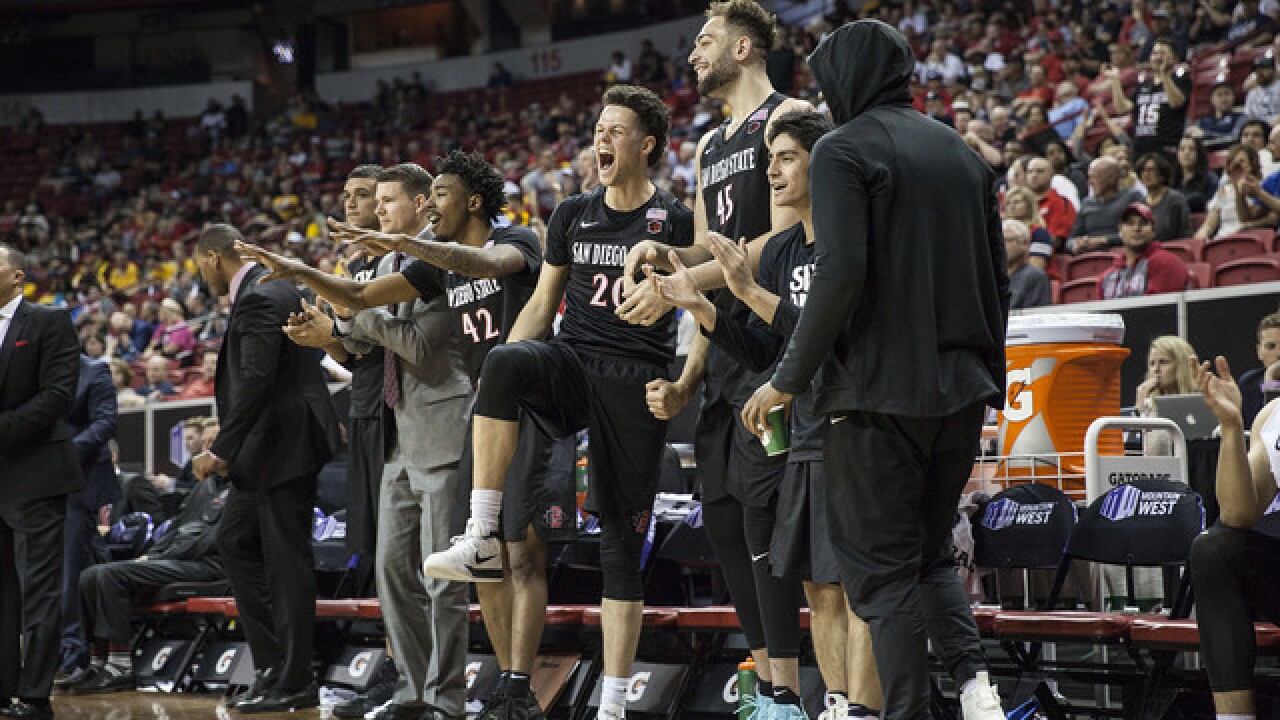 The Daily Aztec
Kelly Smiley
<p>The Aztecs bench celebrates during the teams 64-52 victory over Fresno State in the quarterfinals of the Mountain West tournament on March 8 in Las Vegas.</p>

The Aztecs led for nearly 35 minutes, defeating No. 4 seed Fresno State 64-52 in the teams quarterfinal matchup at the Thomas and Mack Center in Las Vegas on March 8.

The nearly wire-to-wire victory was the Aztecs first victory in three attempts against the Bulldogs this season.

"I just feel like we lock in really well in the first game, and we don't take any game for granted, no matter who the opponent is," senior guard Trey Kell said. "There was some added motivation knowing we haven't beat (Fresno) yet this year."

The Aztecs will now play regular-season champion Nevada in tomorrow's semifinals, after the Wolf Pack came back in the second half of their quarterfinal matchup to defeat UNLV earlier in the day.

The Bulldogs were doomed by sloppy play in the second-half, which resulted in 11 turnovers after the break (14 total).

"I think we saw the improvement is we're better defensively," head coach Brian Dutcher said. "We're harder to score on. We look like Aztec teams of old."

Kell led SDSU with 16 points to go with seven rebounds, while fellow senior and co-captain Malik Pope finished with 12 points to help pace the team.

The Aztecs shot just 42 percent for the game, but limited the Bulldogs to only 38 percent from the floor.

"It was old-fashioned basketball," Dutcher said. "It was slug it out, nothing easy, two opponents that knew each other well, and both played well, and we hit a spurt... we were able to come away with a victory. "

Despite leading through much of the game, the Aztecs did not extend their lead to double digits until a three-point play from freshman forward Matt Mitchell (10 points, four rebounds)  gave the team a 52-40 lead with 6:36 to play.

Fresno pulled within 58-51 with 1:41 to play, after a three-pointer from junior guard Deshon Taylor, but the team would not get any closer.