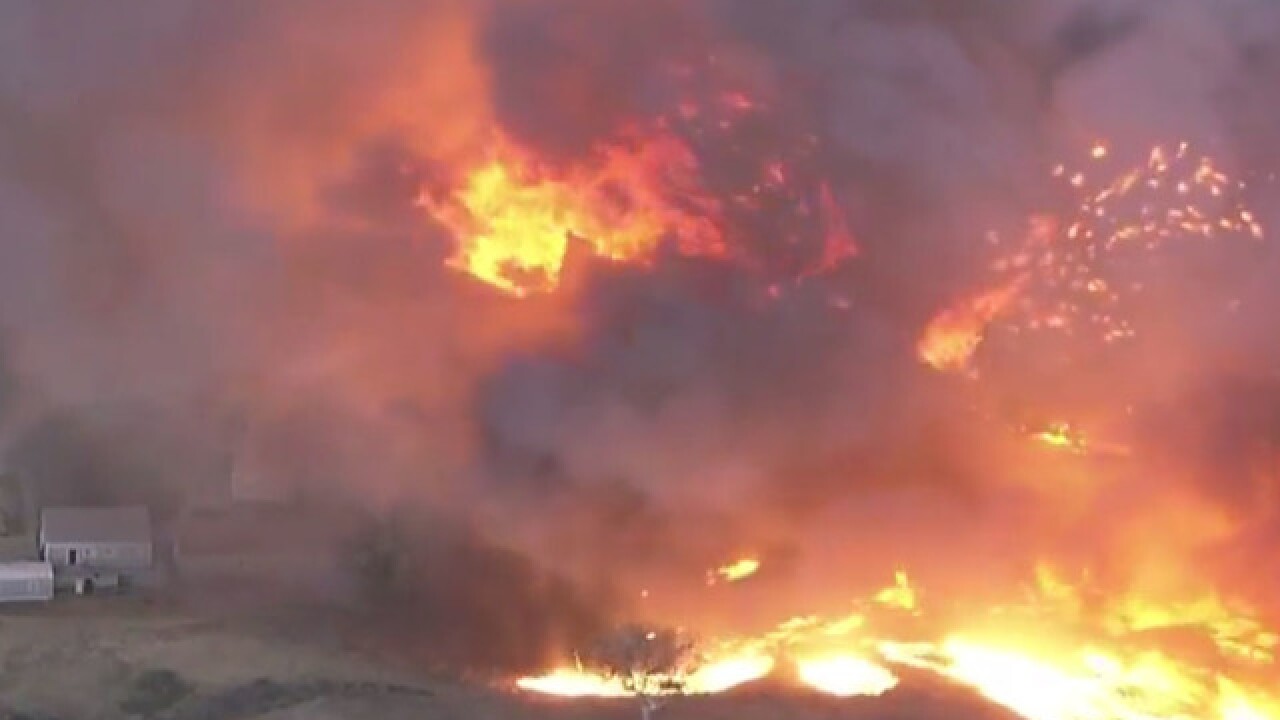 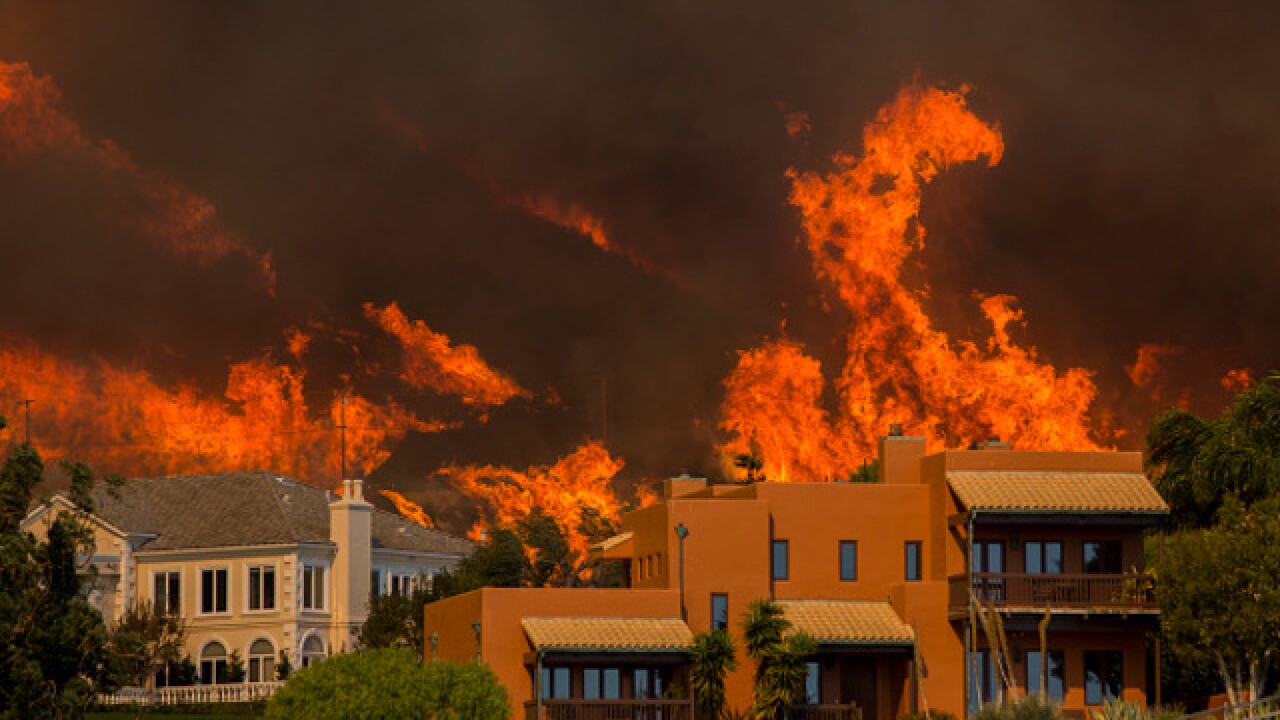 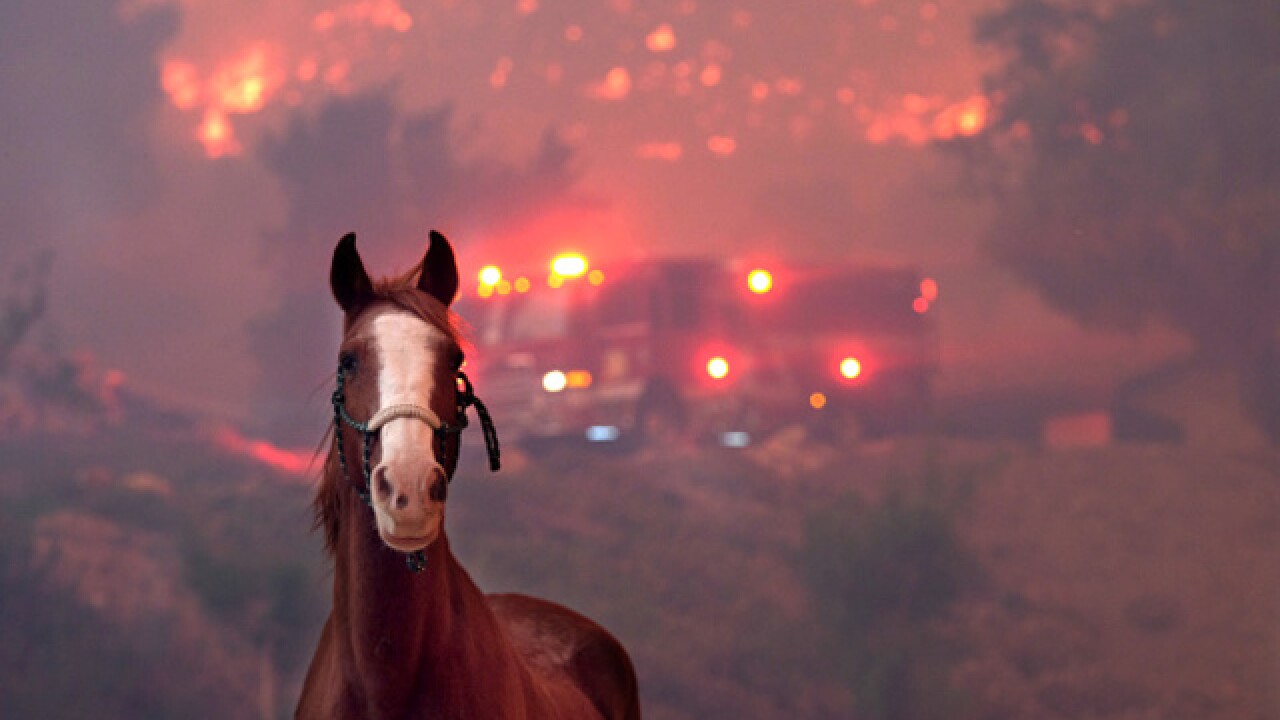 MALIBU, Calif. (CNS) - Driven by howling winds and dangerously low humidity, a brush fire that began in Ventura County but raced over the Los Angeles County line continued a relentless march toward the Pacific Ocean Friday, forcing thousands of people from their homes as evacuation orders were imposed for the entirety of Malibu.

The Woolsey Fire exploded to more than 10,000 acres overnight, then was estimated at 14,000 by midday Friday, with zero containment. Driven by 50- to 60-mph winds, the flames jumped the south across the Ventura (101) Freeway in the Liberty Canyon area early Friday.

The flames devoured homes as it continued to chew through brush, but there was no immediate word on how many structures had been affected. By early Friday, authorities indicated there had been significant property losses. Fire crews in one area of Malibu alone reported as many as 30 homes being consumed by flames, with the blaze advancing on dozens of others.

There were sporadic reports of people being unable to escape burning homes in remote areas, but as of mid-morning Friday, there had been no reports of any injuries to firefighters or residents.

Evacuation orders were imposed overnight affecting tens of thousands of residents in both counties, and at 10 a.m. Friday, mandatory evacuation orders were expanded to include the entire city of Malibu. The order includes the area south of the 101 Freeway from the Ventura County line east to the area of Old Topanga Canyon Road, and as far south as the Pacific Ocean.

Residents were advised to use Pacific Coast Highway to evacuate, and to avoid using canyon roads. Evacuating residents were being directed south of PCH toward Santa Monica, creating a snarl of vehicles along the normally scenic coastal route. Complicating matters were the traffic signals that were knocked out of service, and motorists were advised to expect lengthy delays.

Mandatory evacuations were earlier issued for the area north of the 101 Freeway from Valley Vista to Reyes Adobe in the areas of Agoura Hills, Calabasas and Westlake Village.

An evacuation center for animals was opened Friday morning at Hansen Dam, 11770 Foothill Blvd. in Lake View Terrace, after the evacuation center at Pierce College in Woodland Hills reached capacity. And a large animal evacuation center was established at the Zuma Beach parking lot in Malibu. Industry Hills Expo Center in the San Gabriel Valley was also offering shelter for horses from fire-affected areas.

With the fire jumping the freeway overnight, the California Highway Patrol shut down a four-mile stretch of the 101 Freeway between Las Virgenes to Kanan roads. The closure was extended Friday morning to include the entire freeway from Valley Circle Boulevard in Hidden Hills to Reyes Adobe Road in Agoura Hills, according to Caltrans.

The Woolsey Fire broke out about 2:25 p.m. Thursday in Ventura County west of Chatsworth, pushed by strong Santa Ana winds. Early Friday, the whipping winds prevented fire commanders from ordering aerial assaults in the early morning hours, but some flights began at 5:30 a.m. as the wind died down. But winds quickly began picking up again as dawn broke. High winds were expected to continue until 10 p.m., when a red flag warning of heightened wildfire conditions is scheduled to expire.

Fire authorities estimated Friday morning that at least 75,000 homes in Los Angeles and Ventura counties were under evacuation orders, but with the orders spreading along with the flames, thousands more were likely affected.

Heavy smoke and strong winds hampered visibility for crews on the fire lines and residents trying to evacuate fire zones.

About 12:30 a.m., all residents in Los Angeles and Ventura counties north of the Ventura (101) Freeway, south of Bell Canyon Road, west of Valley Circle Boulevard and east of Erbes Road, as well as north of Kanan Road, west of Lindero Canyon to Erbes Road extending north to Sunset Hills Boulevard were told to evacuate, according to the Ventura County Fire Department. That includes areas of Agoura Hills, Calabasas and Westlake Village, all in L.A. County.

The Los Angeles Police Department was placed on a citywide tactical alert about 12:45 a.m. to ensure all resources are available to assist with any evacuation orders and road closures prompted by the Woolsey Fire, according to a statement from the department. The tactical alert was lifted about 7:45 a.m.

"If you're in an affected area and have been ordered to evacuate, evacuate," police said.

Calabasas city officials advised residents not under mandatory evacuation orders to prepare to leave by gathering their IDs, medications, important documents, emergency supplies and a change of clothes.

Los Angeles County and city crews were assisting in the firefight, which was taking place as a second, larger brush fire raged further west in Ventura County in the Santa Rosa Valley/Thousand Oaks area.