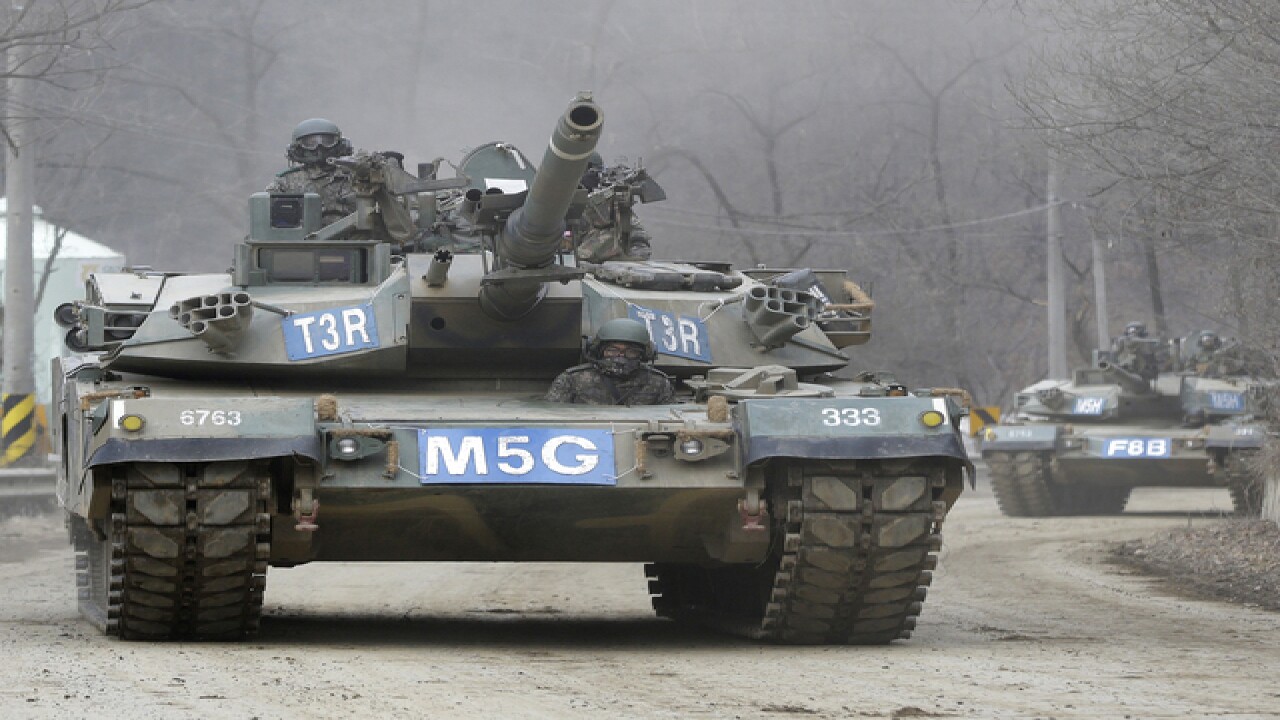 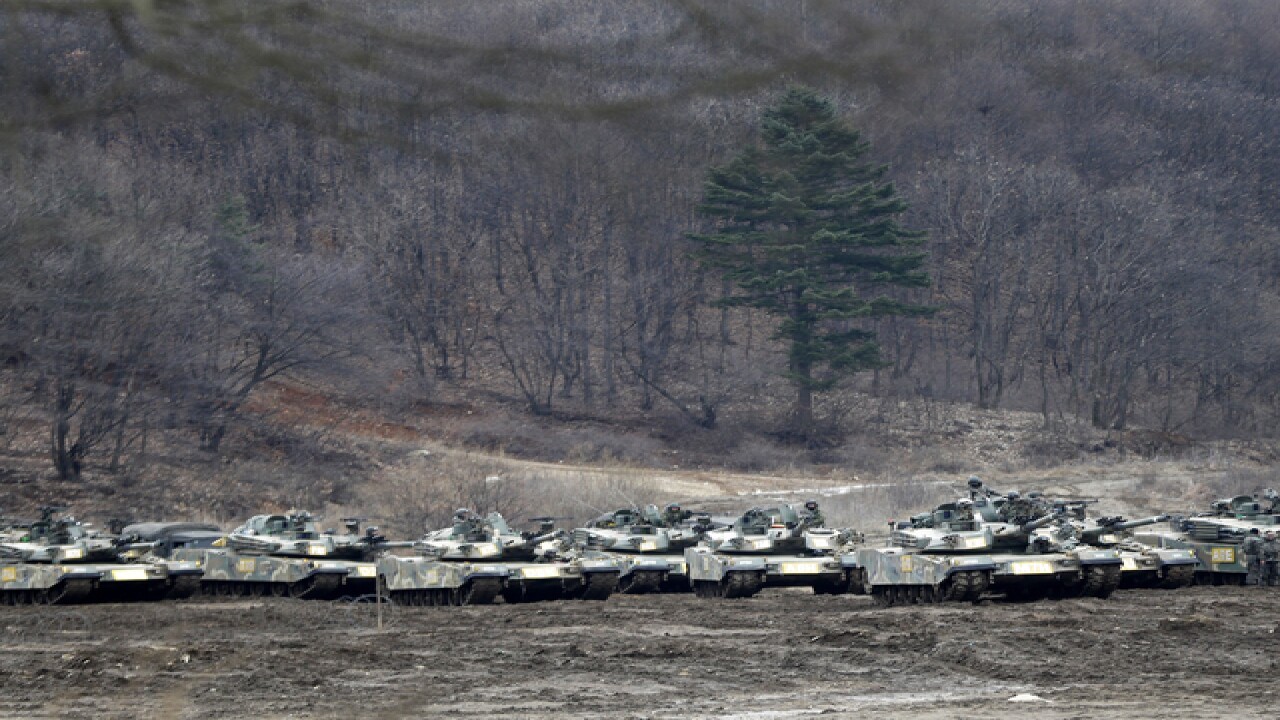 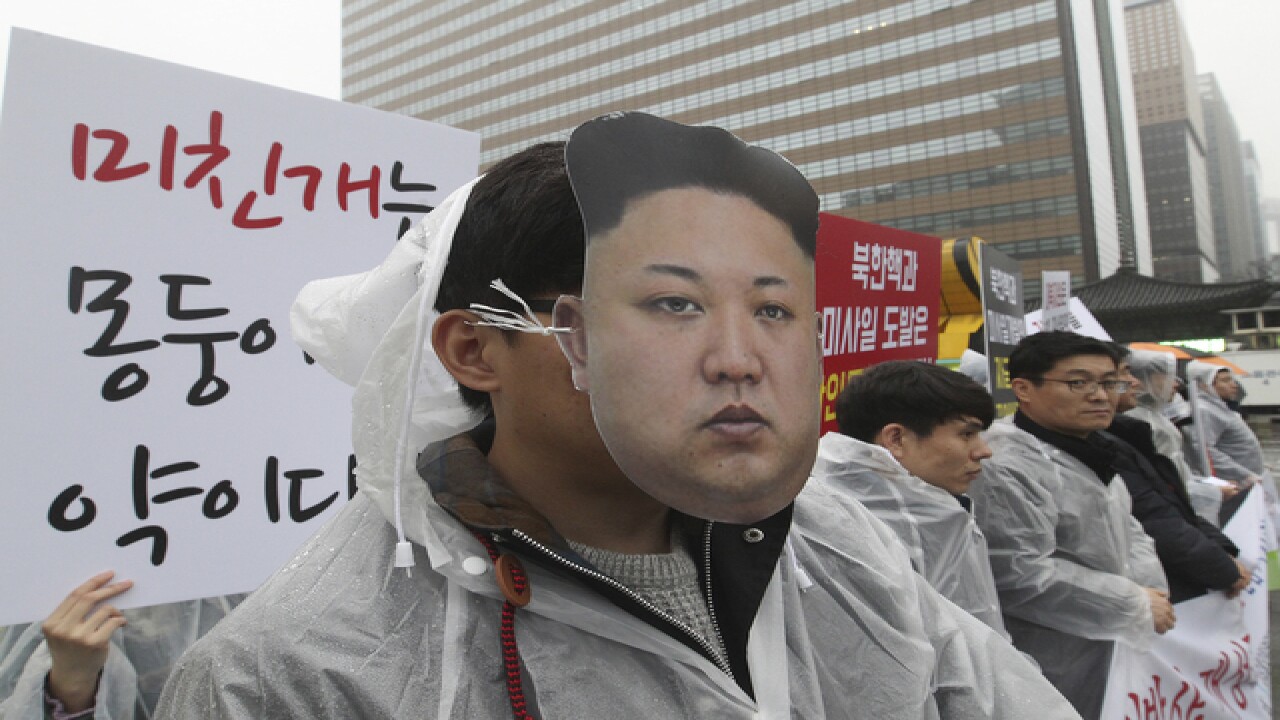 North Korea responded to an unusually harsh verbal attack by South Korea's president against the North's leader and its recent nuclear test and rocket launch with a characteristically colorful invective of its own Saturday, calling her policy traitorous and adding that Washington's newly enacted sanctions are "laughable."

The North's official reaction — including the insult "senile granny" — was expected, though it took several days for Pyongyang to announce it through its state-run media.

North Korea regularly condemns South Korean President Park Geun-hye through sexist and violent language, saying recently that she lives upon "the groin of her American boss."

But the renewed war of words has some worried that the tensions could lead to real conflict.

As evidence of heightened anxieties, sounds of explosions early Saturday caused South Korean residents of a front-line island to prepare to evacuate, but it was later determined that the noise came from a North Korean artillery drill across the rivals' disputed maritime border. No North Korean projectiles crossed into the south side of the border.

Park has been backed up several high-profile demonstrations of U.S. military might that are seen by Pyongyang as deliberate provocations.

A U.S. B-52 bomber flew over the Korean Peninsula after the North's Jan. 6 nuclear test and U.S. F-22 stealth fighters were deployed to a an air base in South Korea after the Feb. 8 rocket launch.

Next month, the U.S. and South Korea are expected to hold larger-than-usual joint military drills. The annual war games are a major source of tensions, since Pyongyang sees them as evidence that Seoul and Washington, which are still technically at war with the North because the 1950-53 Korean War ended with an armistice, not a peace treaty, are planning an invasion.

The latest round of verbal volleys began in a speech to South Korea's parliament on Tuesday — a major holiday in North Korea marking the birthday of Kim Jong Un's late father, Kim Jong Il — when Park warned that North Korea must either change its ways or face the collapse of its regime.

The president added that Kim Jong Un's authoritarian government is an "extreme reign of terror" and used his name three times, something usually avoided at her level. It is believed that Kim has never referred to Park by name in his rare public speeches.

In Saturday's dispatch, North Korea's official Korean Central News Agency, or KCNA, called Park a "tailless, old, insane bitch" — though the phrase was toned down to "dog" in the English version, which came out later in the day.

It also called her "a traitor for all times."

Along with her pointed criticism of Kim Jong Un's regime, Park's government has also resumed cross-border propaganda broadcasts and shut down a factory park just north of the Demilitarized Zone that had been jointly run by the rivals. Seoul has also started preparatory talks with Washington on deploying a sophisticated missile defense system in South Korea, angering Beijing and Moscow, who feel they could be targeted by such a system as well.

The North took special umbrage at the closure of the industrial zone, saying the decision will cost the South more than it will harm North Korea and calling the factory park a "symbol of hope that alleviates the pain of the nation resulting from division."

Park and her deputies maintain that South Korean payments to North Korean workers at the park — $110 million last year alone — have gone in large part straight to the leaders who oversee the North's nuclear bomb and missile programs.

"This only proves herself to be the worst imbecile and idiot unable to count even simple numbers," it said. "The shutdown of the zone will bring tremendous damages to the South Korean economy as a whole."

In a separate report on Saturday, KCNA quoted an unnamed Foreign Ministry official as saying that despite the "laughable" U.S. sanctions, the North will stick to its official policy of simultaneously developing nuclear weapons and its economy.

Washington's new sanctions against Pyongyang were signed into law by President Barack Obama on Thursday. The sanctions are aimed at denying the North the money to develop miniaturized warheads and the long-range missiles required to deliver them.

Meanwhile, Seoul's Defense Ministry said the military completed its search operations for debris from the North Korean long-range rocket that was launched into orbit Feb. 7.

South Korean officials believe the North deliberately blew up the rocket's first stage after burnout to prevent South Korea from retrieving debris. Some analysts said that claim may be premature and are studying what little evidence is available for more clues.

North Korea said it launched an Earth observation satellite, which it has dubbed the Kwangmyongson-4, or Shining Star-4. The satellite has been confirmed to be in orbit, but it is not known if it has succeeded in transmitting signals back to Earth.

"The DPRK's successes in H-bomb test and in the launch of satellite Kwangmyongsong-4 startled our planet," KCNA said.

"But only Park Geun-hye behaved quite contrary to this," it added. "Writhing and wriggling, she sits up all night, spouting rubbish, invectives and vituperation."