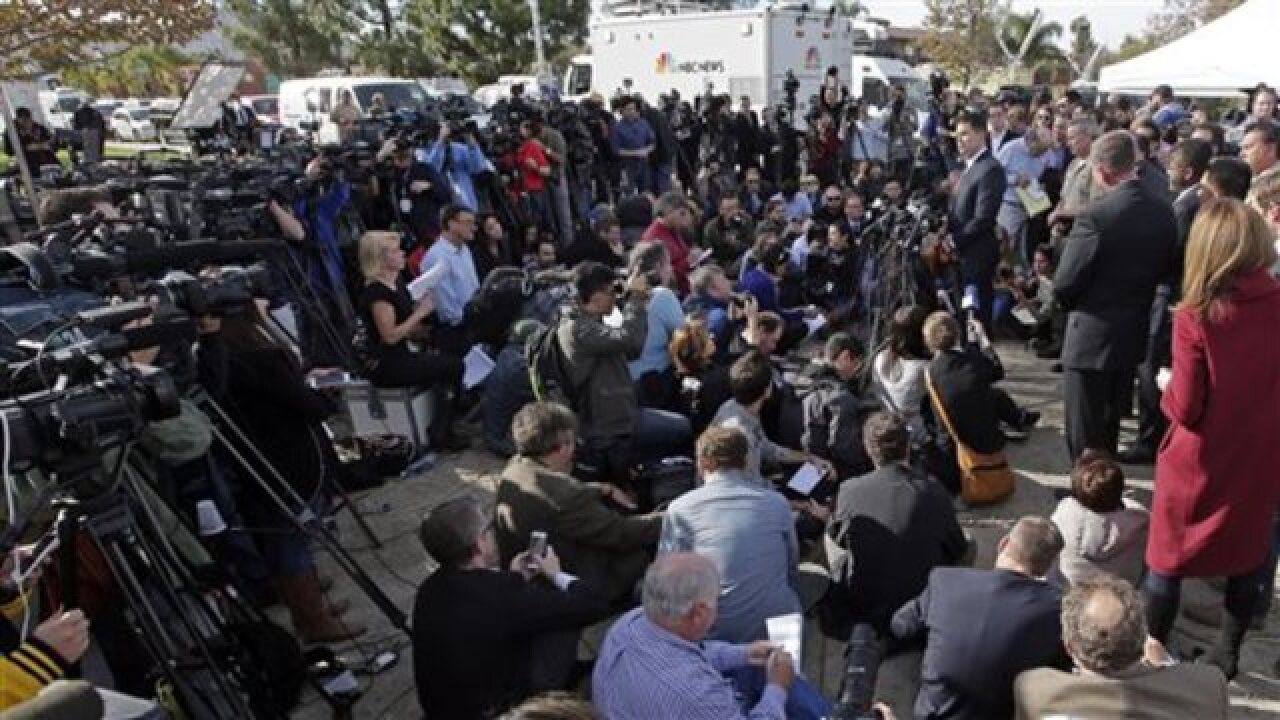 SAN BERNARDINO, Calif. - The FBI announced Friday that it is investigating the mass shooting in Southern California as an act of terrorism, while a U.S. law enforcement official revealed that the woman who helped her husband carry out the attack had pledged allegiance to the Islamic State group and its leader on Facebook under an alias.

David Bowdich, assistant director of the FBI's Los Angeles office, would not elaborate on how the bureau reached that conclusion, citing "a number of pieces of evidence" but declining to give details.

"We are investigating it as an act of terrorism for good reason," he said.

Syed Farook and his wife, Tashfeen Malik, killed 14 people at the holiday party for his co-workers. The Muslim couple died hours later in a fierce gunbattle with police.

A Facebook official says Tashfeen Malik praised the leader of the Islamic State group in a post at 11 a.m. Wednesday, when the couple were believed to have stormed a San Bernardino social service center and opened fire.

The Facebook official, who spoke on condition of anonymity because the person was not allowed under corporate policy to be quoted by name, said the company discovered the account Thursday. It removed the profile from public view and reported its contents to law enforcement. Bowdich also says the couple crushed two cell phones and discarded them in a trash bin.

The Islamic State-affiliated news agency Aamaq said Friday the two shooters were "supporters" of the group, but it stopped short of claiming responsibility for the attack.

Bowdich said he was not aware of the report but wasn't surprised IS would attempt to link itself to the attack. He said investigators are looking carefully to determine if there is an IS connection.

FBI Director James Comey cautioned that the bureau's investigation has not yet shown evidence that the slain shooting suspects were part of a larger group or members of a terror cell. Comey said that despite growing signs of radicalization among the two suspects, there "is a lot evidence that doesn't quite make sense." He said the suspects did not appear on the FBI's "radar screen' prior to the shooting.

Farook and Malik rented a townhome where investigators said they found an arsenal of ammunition and homemade bombs. On Friday morning, the property's owner allowed reporters inside. Bowdich said the FBI was done with the scene.

Malik, 27, was a Pakistani who grew up in Saudi Arabia and came to the U.S. in 2014 on a fiancée visa. Farook, a 28-year-old restaurant health inspector for the county, was born in Chicago to Pakistani parents and raised in Southern California.

The two U.S. officials were not authorized to discuss the case publicly and spoke on condition of anonymity.

Until Friday, federal and local law enforcement officials said terrorism was a possibility — but the violence could have stemmed from a workplace grudge or a combination of motives.

Law enforcement officials have long warned that Americans acting in sympathy with Islamic extremists — though not on direct orders — could launch an attack inside the U.S. Using slick propaganda, the Islamic State in particular has urged sympathizers worldwide to commit violence in their countries.

Others have done so. In May, just before he attacked a gathering in Texas of people drawing cartoons of the Prophet Muhammad, a Phoenix man tweeted his hope that Allah would view him as a holy warrior.

Two weeks ago, with Americans on edge over the Islamic State attacks in Paris that left 130 people dead, Comey said that U.S. authorities had no specific or credible intelligence pointing to an attack on American soil.

Seventy-one people have been charged in the U.S. since March 2014 in connection with supporting ISIS, including 56 this year, according to a recent report from the George Washington University Program on Extremism. Though most are men, "women are taking an increasingly prominent role in the jihadist world," the report said.

It was not immediately clear whether Malik exhibited any support for radical Islamists before she arrived in the U.S. — or, like scores of others arrested by the FBI, became radicalized through online or in-person associations after arriving.

Friends of the soft-spoken Farook who knew him from his daily prayers at a mosque in San Bernardino said they saw nothing to make them think he was violent. They said Farook reported meeting his future wife online.

To receive her visa, Malik was subjected to a vetting process the U.S. government describes as vigorous. It includes in-person interviews, fingerprints, checks against terrorist watch lists and reviews of her family members, travel history and places where she lived and worked.

Foreigners applying from countries that are home to Islamic extremists — such as Pakistan — undergo additional scrutiny before the State Department and Homeland Security approve their applications.

Pakistani intelligence officials said Malik moved as a child with her family to Saudi Arabia 25 years ago.

The two officials, who spoke to The Associated Press on condition of anonymity, said that the family is originally from a town in Punjab province and that the father initially moved to Saudi Arabia around three decades ago for work.

Another person close to the Saudi government said Tashfeed Malik didn't stay in Saudi Arabia, eventually returning to Pakistan and living in the capital Islamabad, though she returned to Saudi Arabia for visits. The person was not authorized to speak publicly, and did so on condition of anonymity.

Farook had no criminal record and was not under scrutiny by local or federal law enforcement before the attack, authorities said. The FBI's Bowdich said Malik was not on his agency's radar. Friends knew him by his quick smile, his devotion to Islam and his talk about restoring cars.

They didn't know he was busy with his wife building pipe bombs and stockpiling thousands of rounds of ammunition for the commando-style assault Wednesday on a gathering of Farook's colleagues from San Bernardino County's health department.

"This was a person who was successful, who had a good job, a good income, a wife and a family. What was he missing in his life?" asked Nizaam Ali, who worshipped with Farook at a mosque in San Bernardino.

Authorities said that the couple sprayed as many as 75 rounds into the room before fleeing and had more than 1,600 rounds left when they were killed. At home, they had 12 pipe bombs, tools to make more explosives and well over 4,500 rounds, police said.

On Friday morning, the owner opened their rental townhome to reporters. On a living room table was a copy of the Quran. An upstairs bedroom had a crib, boxes of diapers and a computer.

The dead ranged in age from 26 to 60. Two of the wounded remained in critical condition Thursday. Nearly all the dead and wounded were county employees.