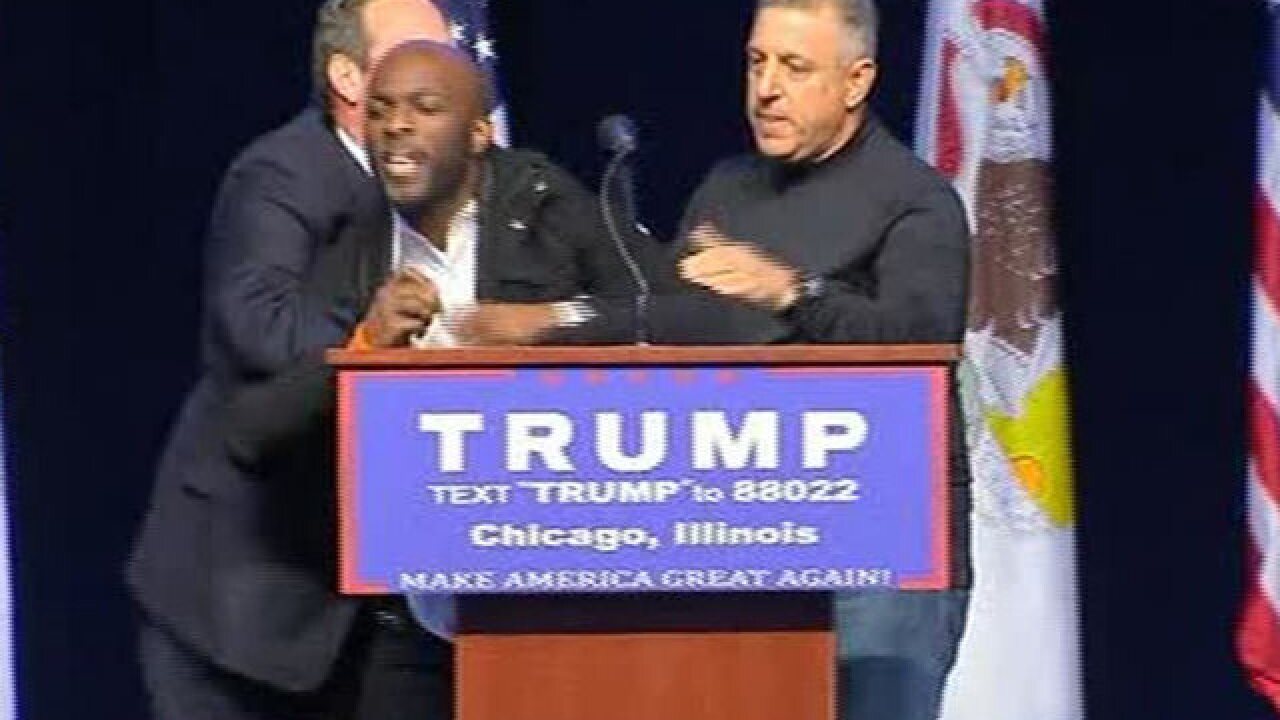 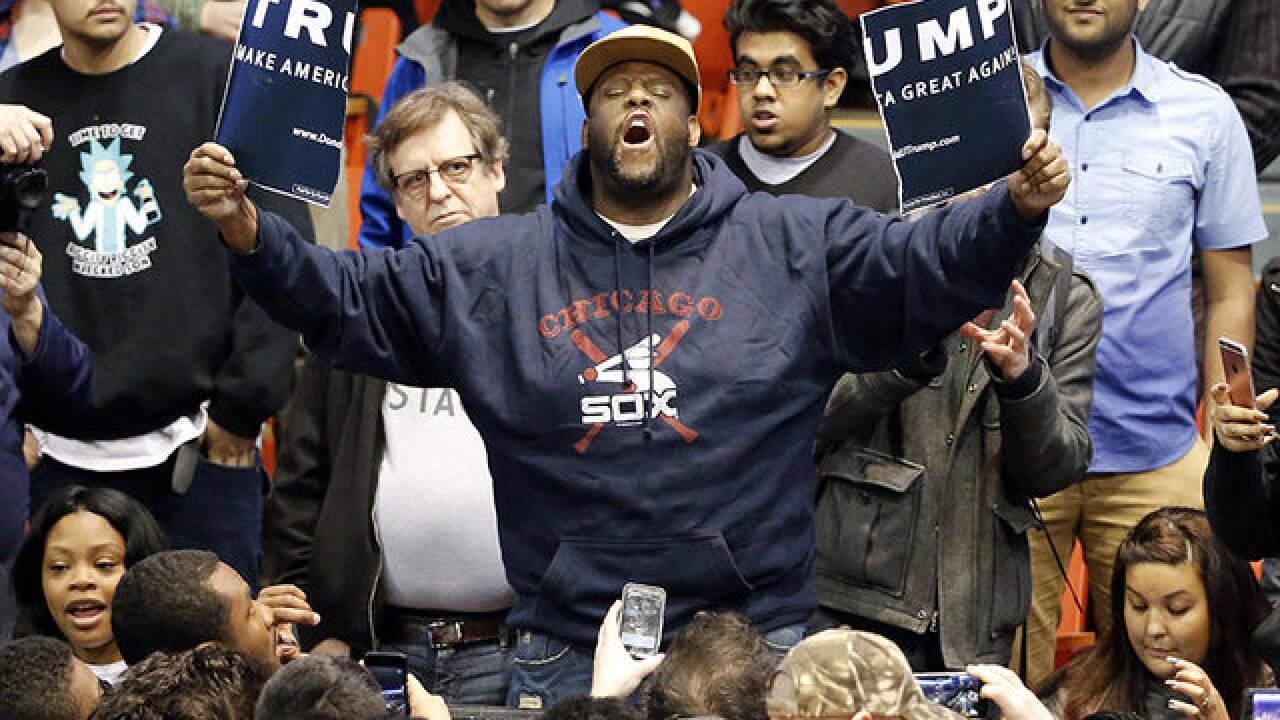 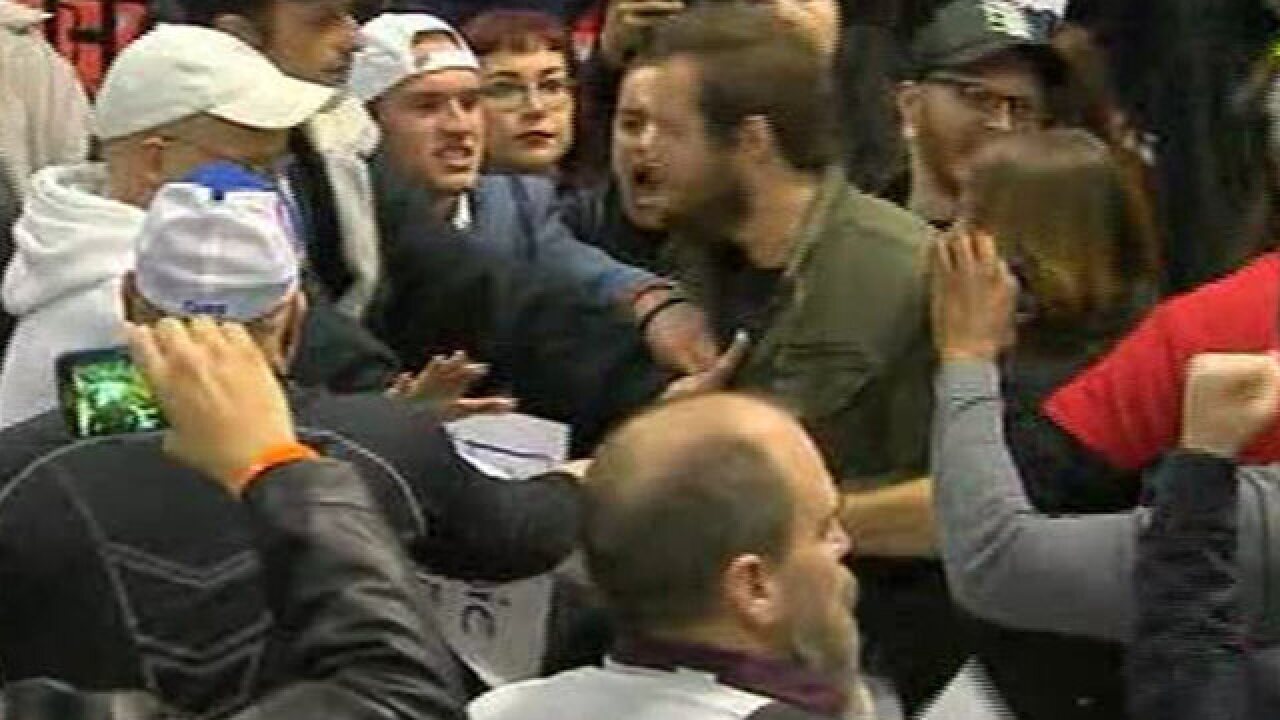 Republican presidential candidate Donald Trump canceled one of his signature rallies on Friday, calling off the event in Chicago due to safety concerns after protesters packed the arena where it was to take place.

The announcement the billionaire businessman would postpone the rally until another day led a large portion of the crowd inside the University of Illinois at Chicago Pavilion to break out into raucous cheers. Many rushed onto the floor, jumping up and down with their arms up in the air.

"Trump represents everything America is not and everything Chicago is not," said Kamran Siddiqui, 20, a student at the school who was among those celebrating. "We came in here and we wanted to shut this down. Because this is a great city and we don't want to let that person in here."

Some supporters of the Republican front-runner started chanting "We want Trump! We want Trump!" in response to the celebrations, and there were some isolated physical confrontations between members of the crowd. Chicago police said there were no immediate arrests.

"It's a shame," said Trump supporter Bill Tail, 43, of the Chicago suburb of Oaklawn. "They scream about tolerance, but are being intolerant themselves, that doesn't make sense."

The Trump campaign issued this statement regarding the decision to cancel:

Mr. Trump just arrived in Chicago and after meeting with law enforcement has determined that for the safety of all of the tens of thousands of people that have gathered in and around the arena, tonight's rally will be postponed to another date.

Thank you very much for your attendance and please go in peace.

As Trump attempts to unify a fractured Republican Party ahead of next week's slate of winner-take-all primary elections, the confrontations between his legion of loyal supporters and protesters who accuse him of stoking racial hatred have intensified at his rallies.

A North Carolina man was arrested after video footage showed him punching an African-American protester being led out of a rally in that state on Wednesday. At that event, the billionaire real estate mogul recalled a past protester as "a real bad dude."

"He was a rough guy, and he was punching. And we had some people — some rough guys like we have right in here — and they started punching back," Trump said. "It was a beautiful thing."

In a telephone interview after postponing his event in Chicago, Trump said he didn't "want to see people hurt or worse" at the rally, telling MSNBC that, "I think we did the right thing."

Trump said the anger on display in Chicago wasn't directed at him or his campaign, but rather was a manifestation of the public's deep frustration with economic conditions in the country.

But many of the protesters in Chicago said they were there to specifically to stop Trump from speaking.

Indeed, Trump taunted the protesters in St. Louis, panning them as weak "troublemakers," and ordered them to "go home to mommy" or "go home and get a job" because "they contribute nothing."

Dozens of University of Illinois at Chicago faculty and staff had petitioned university administrators earlier in the week to cancel the rally, citing concerns it would create a "hostile and physically dangerous environment" for students.

One Trump supporter at the Chicago rally said Trump had created the environment that led to Friday night's melee by holding the event at the school — a civil and immigrant rights organizing hub with large minority student populations.

"I think he was kind of provoking things, to be honest with you," said Dan Kozak, 23, from south suburban Tinley Park. "He could have picked the suburbs and nothing would have happened."

Hours before the event in Chicago was scheduled to start, hundreds of people lined up to get into the arena. Trump backers were separated from an equally large crowd of anti-Trump protesters by a heavy police presence and barricades.

Once inside, some supporters and protesters engaged in a handful of intense verbal clashes. For the first time during his White House bid, the crowd at one of his events appeared to be an equal mix of those eager to cheer on the real estate mogul and those overtly opposed to his candidacy.

When one African-American protester was escorted out before the event started, the crowd erupted into chants of "Let them stay!"

Veronica Kowalkowsky, an 18-year-old Trump supporter, said she had no ill will toward the protesters — but didn't think they felt the same way. "I feel a lot of hate," she said. "I haven't said anything bad to anyone."

Chicago community activist Quo Vadis said hundreds of protesters had positioned themselves in groups around the arena, and they intended to demonstrate right after Trump took the stage.

Their goal, he said, was "for Donald to take the stage and to completely interrupt him. The plan is to shut Donald Trump all the way down."