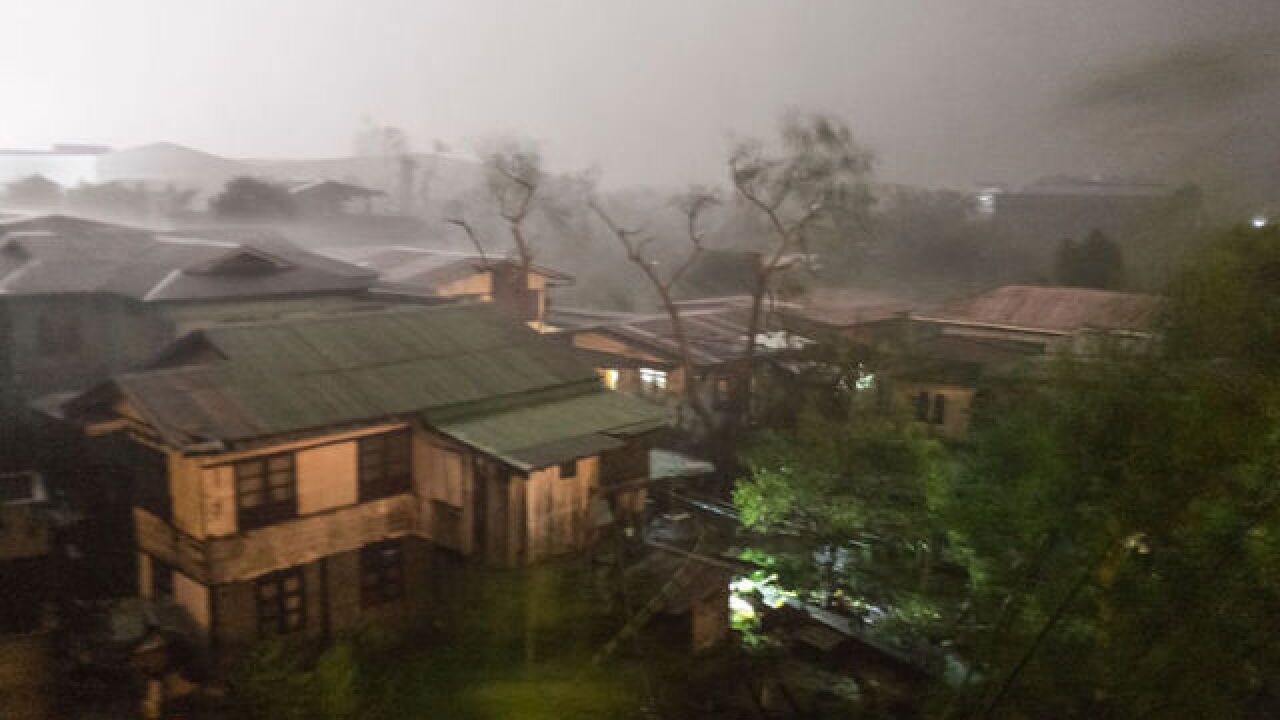 Image copyright 2018 Getty Images. All rights reserved. This material may not be published, broadcast, rewritten, or redistributed.
Jes Aznar
<p>Rains cover the city as strong winds batter houses and buildings lying on the path of Typhoon Mangkhut as it makes landfall on September 15, 2018 in Tuguegarao city, northern Philippines. Mangkut is expected to land Saturday and officials have ordered evacuations and school closures with millions of people in the storms predicted path. The category five storm would be the strongest to hit this year, with wind gusts already at 270 kilometres an hour.</p>

At least two people have been killed by Typhoon Mangkhut, known locally as Ompong, which slammed into the Philippines early Saturday morning, bringing ferocious gale-force winds and pounding rains.

Both victims were women, killed when a rain-drenched hillside collapsed on them, according to the French news agency AFP.

Mangkhut, the strongest storm of 2018 so far made landfall on the northern tip of the island of Luzon, at about 1:40 a.m. local time.

When it crossed land, Mangkhut was packing winds of up to 270 kph (165 mph), 120 kph (75 mph) stronger than Hurricane Florence that hit North Carolina.

Although the death toll is likely to increase, there was some relief in the Philippines that the damage was not as bad as feared.

"Honestly, we were expecting the worst from this," Edgar Posadas, a spokesperson for the National Disaster Risk and Reduction Management Council (NDRRMC) told CNN.

"I was praying and hoping and worried about having so much casualties. But I think after Yolanda, after Haiyan [the international name for Yolanda], there were a lot of lessons that were learned in terms of preparedness, early warnings, preemptive evacuations... and this went a long way."

More than 6,000 people died when Super Typhoon Yolanda hit the Philippines five years ago, the worst in a generation. That storm displaced nearly 4 million people. Many of the survivors ran short of food, water and medicine almost immediately.

But as Typhoon Mangkhut passes over the south-eastern nation, there are still fears more could have perished.

Ricardo Jalad, executive director of the Philippines National Disaster Risk Reduction and Management Council, told CNN that the casualties were rescue workers and that there had been 51 landslides across the region as a result of the storm which is now pounding the Philippines with heavy rain.

Mangkhut's eye is now over water in the South China Sea and making its way toward Hong Kong and southern China.

The latest information from the Joint Typhoon Warning Center has Mangkhut with sustained winds of 195 kph with gusts near 240 kph.

It forecasts the storm will pass around 150 km (95 miles) south of Hong Kong as it moves to the northwest with typhoon-force winds.

Heavy rain and winds are expected in Hong Kong during the morning hours, picking up in intensity through early afternoon and not tapering off until early Monday morning.

Typhoon Mangkhut will make another landfall on Sunday night in the Chinese province of Guandong near the cities of Yangjiang and Zhanjiang.

From there the system will continue to move westward and will rain itself out over northern Vietnam, which could lead to some flooding there early next week.

Meanwhile, the death toll is expected to rise in the Philippines as Mangkhut leaves a wake of destruction and landslides.

They'll fly from Manila once the weather improves, Lorenzana said, carrying aid and allowing rescuers to reach remote areas of the mountainous north.

Earlier, in the provincial capital Tuguegarao, strong winds lashed buildings, pulling off entire roofs and throwing large chunks of debris into the air.

The Governor of Cagayan, Manuel Maamba said emergency services are clearing debris from main roads. Power and communication lines are also down, making it hard to contact more remote areas and assess damage.

The Philippines Red Cross said waters were rising in parts of Tuguegarao. Video on social media showed people in the city wading through ankle-deep water, amid torrential rains.

"There was plywood and shards of glass flying through the corridors," storm chaser James Reynolds, who was in a hotel in Santa Ana, in Cagayan, told CNN. "It must be hell for the people out there living in huts and fragile homes, must be terrifying."

Many of those in Northern Luzon live in isolated farming communities. There are fears the typhoon could lead to flash flooding in more rural areas, triggering landslides.

An estimated 5.2 million people in the Philippines were within 125 kilometers (77 miles) of the projected path of the Super Typhoon, according to the National Disaster Risk Reduction and Management Council.

The scale of the typhoon could be felt in the Philippines capital Manila, more than 340 km (200 miles) from the eye of the storm, where heavy overnight rains have led to widespread flooding in urban areas.

Mangkhut is the strongest storm to make landfall in the Philippines since Super Typhoon Haiyan in 2013, which left more than 6,000 people dead, though Haiyan hit a more populated part of the country.

It's also the strongest to make landfall on the Philippines' northern island of Luzon since Super Typhoon Megi in 2010. Northern Luzon was also devastated in 2016 by Super Typhoon Haima, with 14,000 houses destroyed and 50,000 homes damaged, according to CNN Philippines .

Before the storm's arrival Friday, parts of Luzon were placed under Tropical Cyclone Warning Signal No. 4 by the Philippine Atmospheric, Geophysical and Astronomical Services Administration (PAGASA), meaning those areas could expect winds of up to 185 kilometers per hour (114 mph) that could uproot trees, destroy crops, take out electricity and damage buildings. The agency had warned of storm surges up to 19 feet along the Cagayan and Isabela province coastlines.

At 11:00 a.m. local time, authorities warned of potential storm surges up to six meters high in Ilocos Norte, as Mangkhut moved further off the coast.

The Philippines Red Cross said it had activated 30,000 volunteers across Luzon to prepare for the impact of the storm and dispatched a "humanitarian caravan" consisting of rescue and relief vehicles to the parts of the island expected to be among the worst affected.

Officials told CNN Philippines the cost in lost rice and corn crops could be upward of $116 million, with more than 1,220,000 hectares of fields expected to be damaged by the storm.

Meanwhile people in the densly populated areas of Hong Kong, Macau and Southern China were hunkering down as they waited for the storm to hit.

Mangkhut could be one of the strongest storms to have an impact on Hong Kong in more than six decades. The typhoon will make its closest pass to Hong Kong during the day on Sunday, likely during the afternoon.

Officials in Hong Kong held emergency meetings Friday, and residents in low-lying areas and outlying islands have been urged to move to temporary shelters.