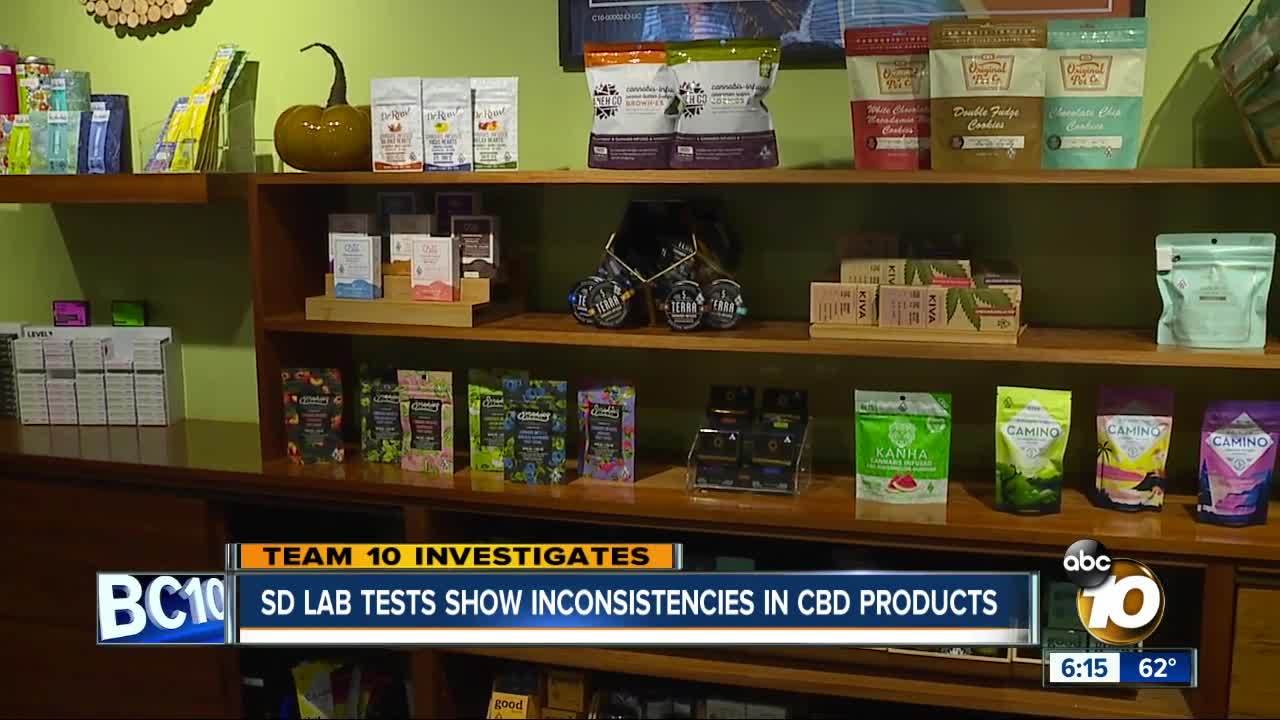 10News visited a San Diego lab that tested CBD products for ingredients like pesticides and heavy metals. The results were surprising to lab personnel. SAN DIEGO (KGTV) – It's exploding in the wellness industry, but is CBD safe?

10News visited a San Diego lab that tested CBD products for ingredients like pesticides and heavy metals. The results were surprising to lab personnel.

Shelby Huffaker is the lead cannabis educator at Torrey Holistics in Sorrento Valley. The licensed dispensary recently conducted its own CBD study to show customers just how unreliable the open market can be. "We collected about a dozen different products from various locations around San Diego and also on the internet," she tells 10News.

"It's pretty busy right now with it being harvest time," says David Marelius, Ph.D. He's the co-founder of Infinite Chemical Analysis Labs, which tests cannabis and related products. "People are definitely trying to take advantage of the CBD boom right now," he adds.

Both CBD and THC come from the cannabis plant, but CBD does not have the psychoactive properties that give you the feeling of being high. CBD received praised for claims of health benefits like reducing anxiety and inflammation.

According to Infinite Chemical Analysis Labs, none of the CBD samples purchased on the internet by Torrey Holistics had any CBD in them. Dr. Marelius tells 10News that the majority of the overall samples didn't meet their packaging claims. He adds that the products' potencies were off, and one product had almost 70% less CBD in it than what it advertised. Three of the products reportedly failed for pesticides, although the levels were so low that they likely weren't harmful.

"It's kind of the wild west out there," says Sally Greenberg with the National Consumers League. Greenberg tells 10News that CBD sellers often exaggerate the benefits of CBD without having the science to back up the claims. "[They say] that they cure cancer or treat Alzheimer's or treat AIDS," she adds.

The National Consumers League is advocating for federal oversight from the Food and Drug Administration, which currently doesn't regulate most CBD.

In California, the Bureau of Cannabis Control tests CBD that's sold in licensed dispensaries, like Torrey Holistics. "You're going to want to look for a Batch number or UID number. That ensures that we're able to match the testing results with that specific product," says Huffaker.

The dispensary is hoping that the lab results will highlight the importance of researching your CBD before buying. "Everything carried in a licensed cannabis store is going to have to be verified [and] vetted by the dispensary [to be sure] it has gone through the necessary testing," adds Huffaker.

The state's Bureau of Cannabis Control has a search function on its website where you can see what licensed dispensaries are in your area, or you can search a dispensary to be sure its licensed. Click here.