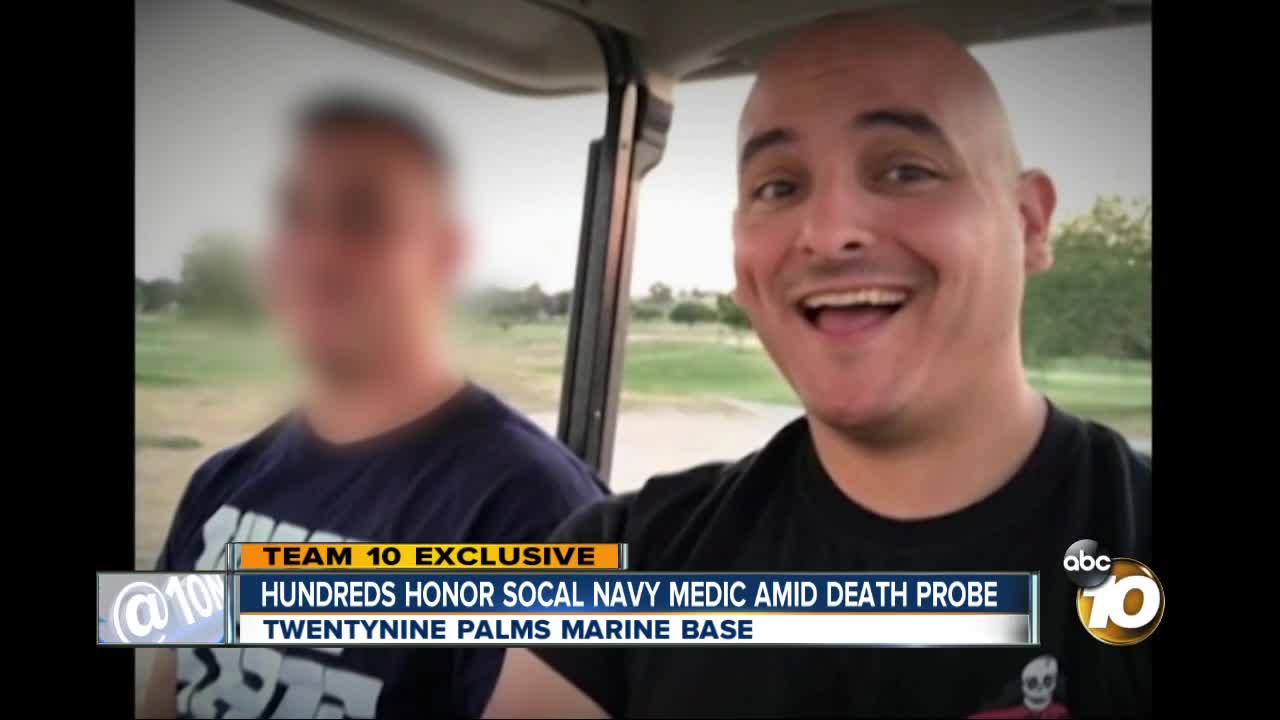 Hundreds of service members gathered for a memorial to honor a fallen Southern California Navy medic as NCIS continues its investigation into his death.

TWENTYNINE PALMS, Calif. (KGTV) - Hundreds of active duty service members and family members attended a memorial this Wednesday for a medic who mysteriously died this summer on a Southern California military base.

Team 10 investigative reporter Jennifer Kastner first broke the story a few weeks ago when 10News reported that he may have been killed by someone else. It’s been three months since HM3 Michael Vincent de Leon died but investigators still won’t release details on his death. He was a Navy corpsman, which is a medic, stationed at the Twentynine Palms Marine base in San Bernardino County.

At the memorial service, rubber duckies were handed out to attendees. Ducks were Michael’s favorite type animal. "Michael was special. He thought that life was water and whatever life would throw at him, he was going to act like the duck and the water would fall right off," says Corpsman Michael Joseph Navarro.

“If you needed something, he was there in a heartbeat,” explains former Corpsman Benjamin Clark. He and wife Lisa were some of Michael’s closest friends, yet they're nowhere near understanding his sudden death in August.

“I've been to memorials and I've always seen [them] through the viewfinder. Today, I was front row,” says Jose de Leon, Michael’s father. Jose is a former news photojournalist. He and the rest of the immediate family flew in from Texas for the memorial.

10News spoke with Jose via video chat last month. He had contacted 10News for help after claiming that the military stonewalled him from getting answers about his son's death.

10News learned from a source with close military ties that the Naval Criminal Investigative Service (NCIS) confirmed that Michael's death was being investigated as a homicide. It's a very different story than what the family says they were led to believe in the hours just after the death, when they say the word "suicide" came up from service members on base.

After digging for information, Jose says he spoke to a service member who is close to the case. “I begged him, ‘Just tell me, did Michael pull the trigger or did someone else? There was a long pause and [then he said], ‘Mr. de Leon, someone else pulled the trigger,’” he explains.

He says other service members who knew Michael said he was shot on base at another corpsman's going-away party in the military housing area. Days went by until, he says, an NCIS agent told him there was, in fact, a shooting on the base at a housing unit and other corpsmen were present.

“We're not a vengeful family. [We’re] not vengeful at all, but we do want justice,” Jose tells 10News.

“Out of respect for the investigative process and to protect witnesses, NCIS does not comment on or confirm details relating to ongoing investigations.”