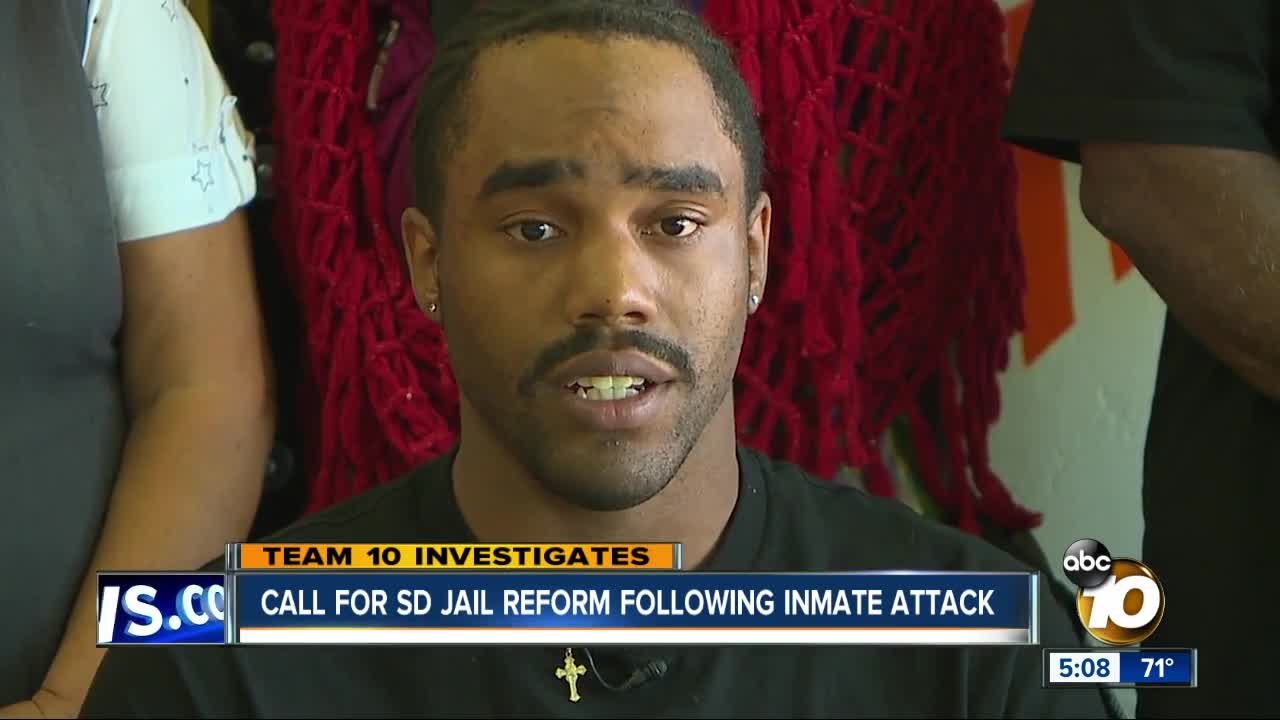 SAN DIEGO (KGTV) – The San Diego County jail system is being blamed after a part of a former inmate’s cheek was bitten off by another inmate who was mentally ill.

10News was at Thursday afternoon’s press conference where their families accused the jail system of failing to provide adequate mental health resources.

“I felt unprotected,” says Miguel Lucas. Lucas now has a scar running across his cheek. It comes after he says part of his face was bitten in an unprovoked attack by inmate Reginald Harmon. It happened in June at the Central Jail.

Harmon is still behind bars, but now family members and supporters of both men are coming together to say the jail system that's run by the San Diego County sheriff's Department needs reform.

“I was sick to my stomach and I was very upset with the jail,” says Harmon’s mother, Alicia Muhammad.

She says that days before he got jailed, she made repeated calls to the Psychiatric Emergency Response Team (PERT) hoping for intervention, but each time he was discharged.
After being arrested for suspected DUI, she says she warned the jail. “I spoke with the lady at the front desk and advised her that my son had mental issues and she said, ‘Okay.’ She would let the guards know,” she adds.

However, she says her son wasn't placed into a mental health unit. Even after he reportedly attacked a different inmate, the families say he was placed in a lower security unit and neglected by mental health providers for two days, until he attacked Lucas.

“It’s just unfortunate that people had to go through what I went through and what people are still going through to this day,” says Lucas.

Following the attack, the families of both men connected and found a friendship. Currently, Lucas is living with Harmon’s aunt and attends church with the Harmon’s family. Lucas did not want to press charges, expressing that he knew Harmon was having mental health issues at the time of the attack.

The families plan to file a civil lawsuit against the San Diego County Sheriff’s Department in the next few months.

The Sheriff’s Department sent 10News the following statement on Thursday:

“The San Diego County Sheriff's Department investigated the assault on Miguel Lucas and forwarded the case to the District Attorney's Office. Reginald Harmon was charged with one count of aggravated mayhem. Lucas and Harmon were properly classified and housed at the time of the incident. Inmates are assigned to different facilities or housing units for a variety of reasons, including classification, bed space considerations, medical or mental needs, or issues with other inmates. For more information on classification, visit the Sheriff's Department website at https://www.sdsheriff.net/jailinfo/booking.html [sdsheriff.net].”