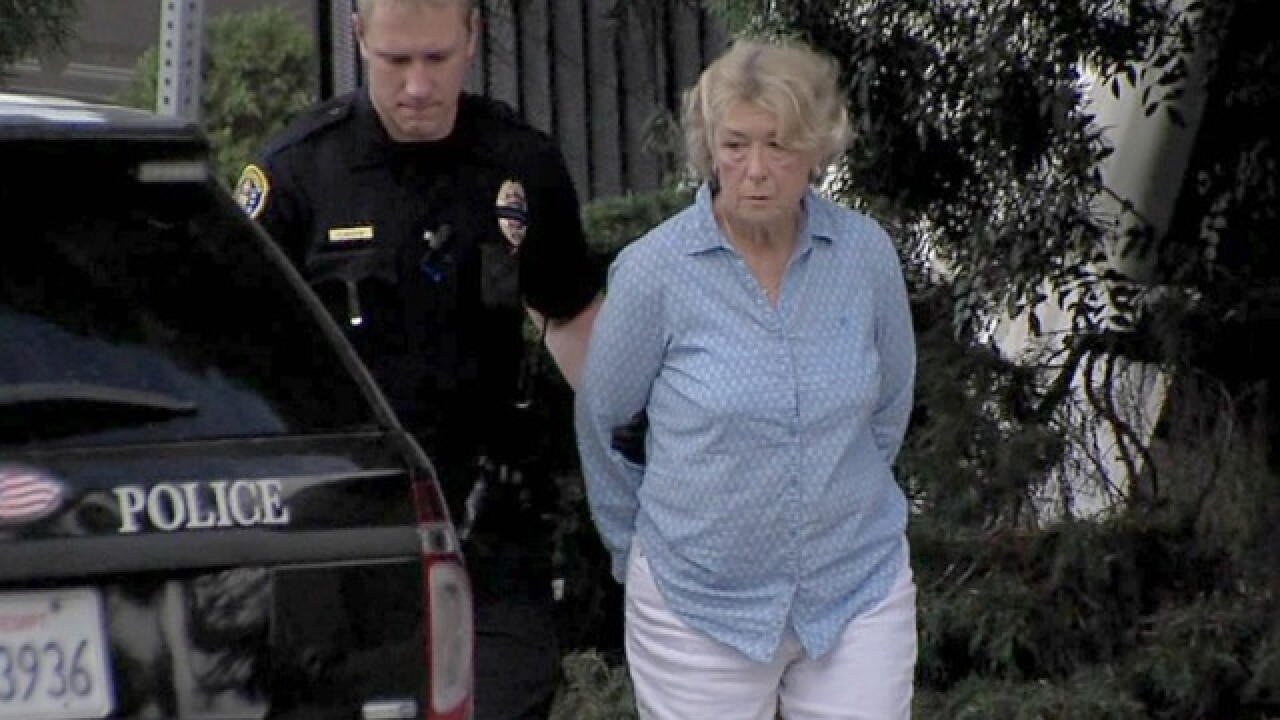 SAN DIEGO - A woman accused of illegally occupying a 90-year-old woman's College Area home was arrested Monday and removed from the premises.

A judge signed a warrant for Cheryl Sherrell's arrest last Thursday, but police could not find her until Monday morning when she called the San Diego City Attorney's Office to complain about Team 10's attempts to speak to her.

Team 10 cameras were there Monday as the 71-year-old Sherrell was surrounded by San Diego police officers and led away in handcuffs to a waiting police cruiser.

In a hearing Tuesday, a San Diego County Superior Court judge ordered Sherrell held on $10,000 bail. The judge also issued a criminal protective order barring Sherrell from coming within 100 yards of the home.

The ordeal began in 2015, when Sherrell was hired to take care of Fran Breslauer's dying husband. Breslauer accused Sherrell of acting inappropriately and asked her to leave.

Sherrell, however, never left the home, staying inside the house on Prosperity Lane for several months.

Breslauer obtained a court order to get Sherrell out of the home, but when Breslauer went to live with her daughter, Sherrell moved back into the house.

Prosecutor Nicole Crosby said, "Without her permission, didn't pay rent, didn't pay utilities, began renting rooms to other people, collecting that rent for her own good."

RELATED STORIES:
• Widow says caregiver has become a squatter: 'How can you do that to a 90-year old woman?'
• Accused squatter renting out rooms in the College Area
• Neighbors protest woman accused of squatting at 90-year-old widow's home

According to court documents, Sherrell's attorney claimed she had the right to live there because Breslauer left for a few months to live with her daughter.

The City Attorney's Office asked for an expedited arraignment because prosecutors wanted Sherrell to face a judge before she bailed out of jail and returns to the house. Sherrell could receive a maximum of two-and-a-half years in jail if she is convicted.

With Sherrell barred from entering the house on Prosperity Lane, the victim's daughter, Jan Breslauer, was able to enter her family home for the first time since her father died in February.

She called San Diego police and a locksmith to enter the house she grew up in. Once inside, Breslauer said it was like "a punch in the gut" to see her childhood home so "filthy and disgusting."

The living room has urine stains all over the carpet. Elsewhere, there was dog excrement found among the piles of clothing, used appliances, furniture and junk.

"It looks like a garbage dump," said Breslauer, who was happy her 90-year-old mother wasn't there to see it.

All the locks were changed to keep Sherrell from returning. If she wants to get her belongings back, she'll have to do so under the watchful eye of police, according to Assistant San Diego City Attorney Ryan Scott.

Scott and an investigator from the City Attorney's Office toured the house and took pictures as evidence in their case against Sherrell, who returns to court for a readiness hearing next month.

EDITOR'S NOTE: The San Diego City Attorney's Office originally told Team 10 Cheryl Sherrell was arrested after she called in to report she was being harassed by the media. Deputy City Attorney Ryan Scott later clarified that Sherrell called 911, not the city attorney's office. Team 10 regrets the error.