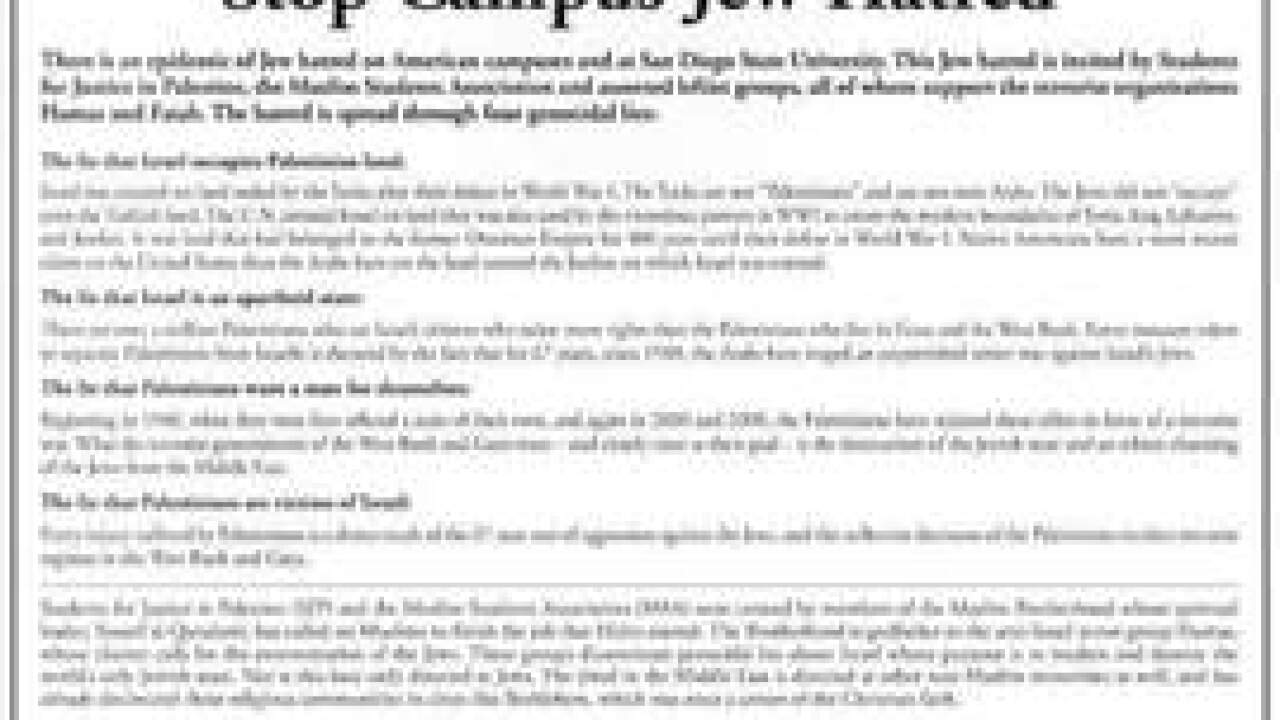 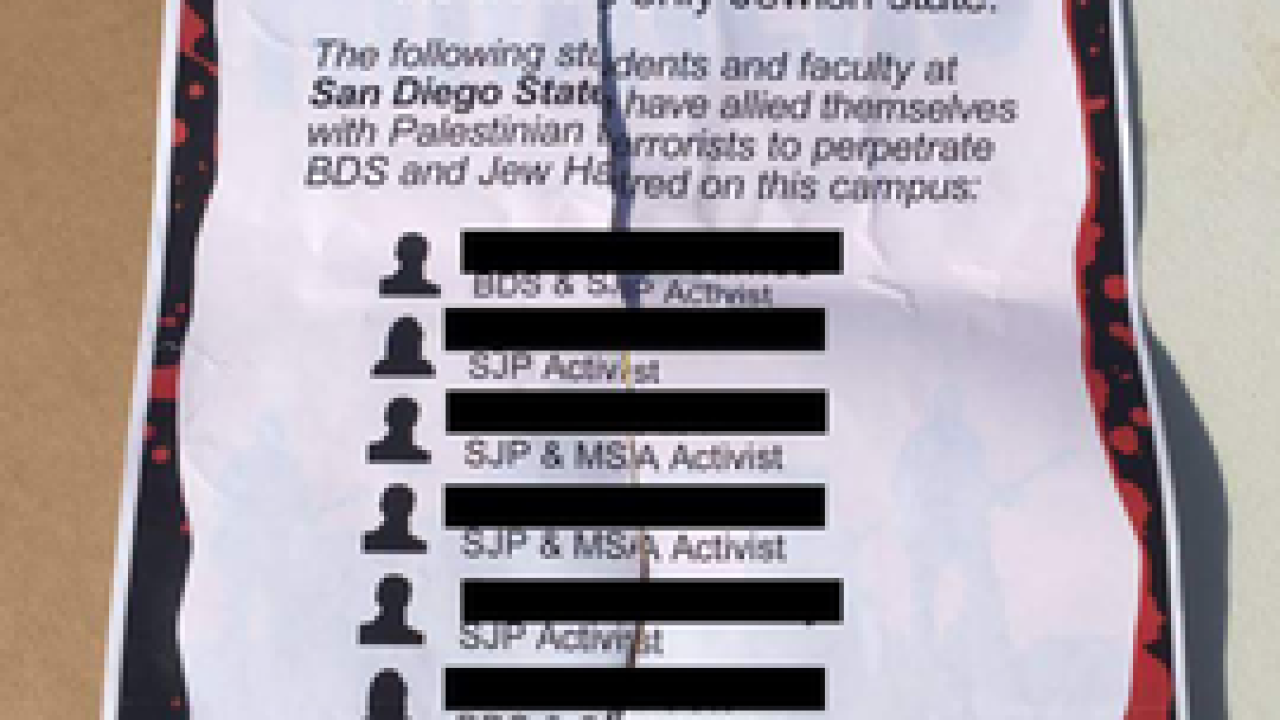 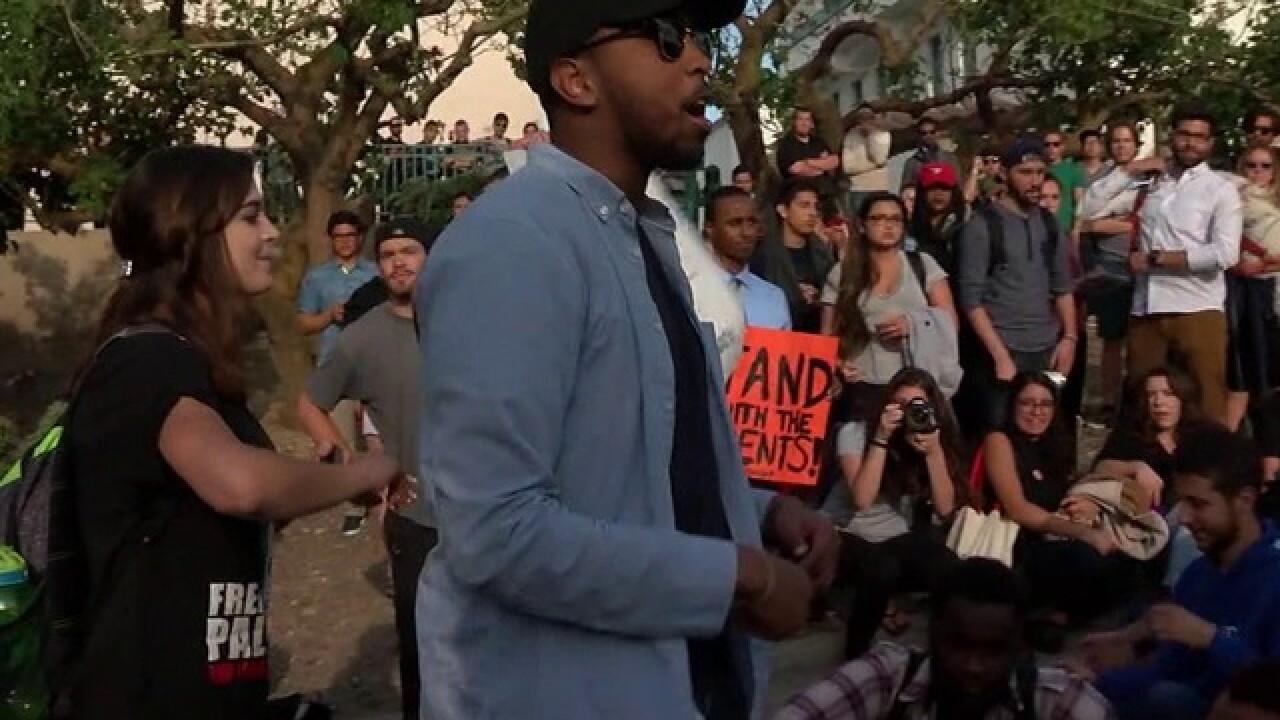 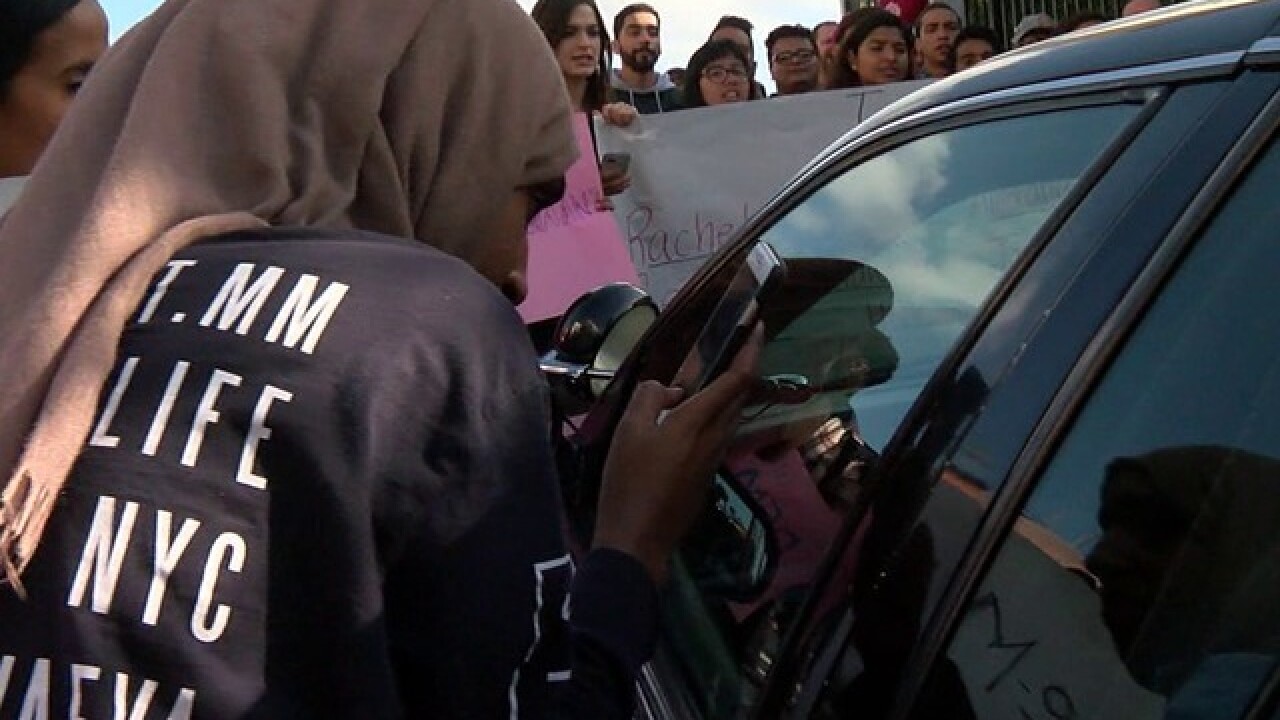 SAN DIEGO - Students at San Diego State University surrounded their president in protest Wednesday, claiming that he has repeatedly refused to condemn a series of anti-Muslim messages.

They followed SDSU President Elliot Hirshman out of a student meeting and to a San Diego police patrol car, which he sat inside for more than an hour.

The controversy started when the David Horowitz Freedom Center hung anti-Muslim posters around campus with a list of student names, accusing them of terrorism.

The following week, the center ran an ad in the student newspaper, the Daily Aztec, claiming some SDSU students hate Jews and support terrorism.

"I do not need to defend my position for why I shouldn't be called a terrorist, for why my man shouldn't be put on a poster across campus," student Osama Alkhawaja said. "And (Hirshman) as my administrator should come to my defense."

"My friends are not terrorists," student Jeanette Corona said. "I've been friends with them for a while. And if their names are being posted around campus, that's an issue of security."

President Hirshman sent out an email two weeks later, but did not condemn the messages.

"He did not protect and speak out against people that are attacking his students on his campus," Nawabi said.

On Wednesday, students followed Hirshman outside to the car and refused to let him leave.

Other administrative staff tried to help him get past the protesters, but students wouldn't move. After more than an hour inside the car, Hirshman finally got out to talk to students.

The crowd cheered when Hirshman finally apologized on behalf of the administration if anyone was offended by his actions.

"It was a very small simple apology, but that's what we were looking for," Alkhawaja said.

As the students parted to let Hirshman through, they sang "Hey, hey, hey, goodbye."

One day after the protest, student organizer Osama Alkhawaja expressed his disappointed at Hirshman's reaction to the protest.

"All of us were very angry that the administration wouldn't even stand up and defend us when we're being attacked."

He didn't expect the turn out but explained the student group has had enough.

"Instead of reaching out to these students, he completely shut us out," said Alkhawaja.

Alkhawaja said Hirshman's apology, hours after sitting inside the patrol car, was not authentic. "[We're] told leadership starts here, but what we saw from the president yesterday was that he didn't exhibit any of those leadership qualities that he supposedly stands for."

On Thursday, Alkhajawa demanded he speak to president Hirshman.

He got shut down but hopes to meet with Hirshman next week.