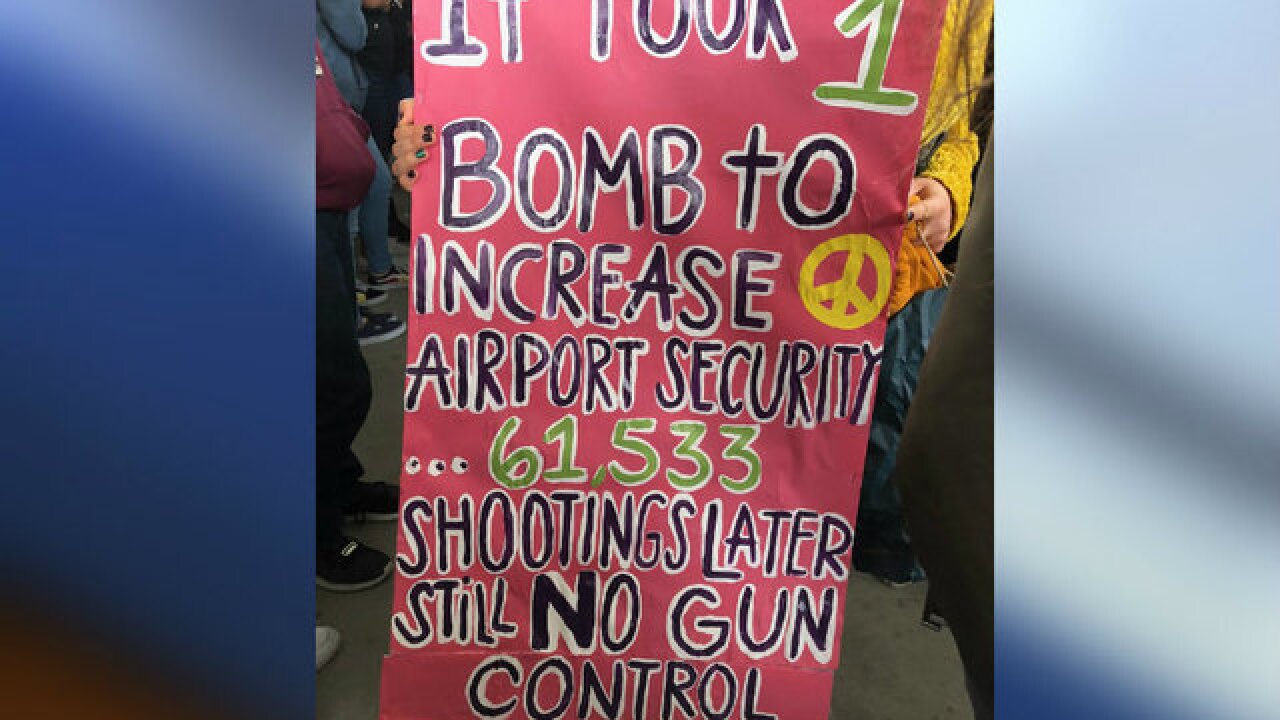 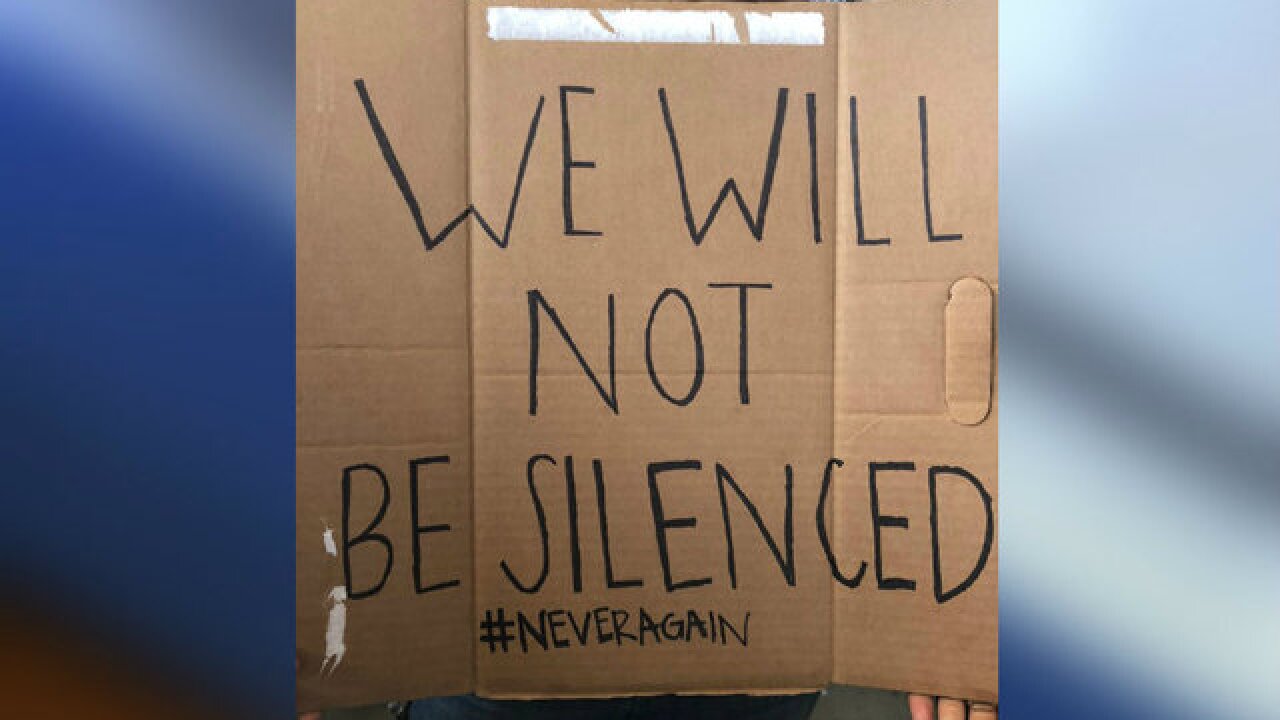 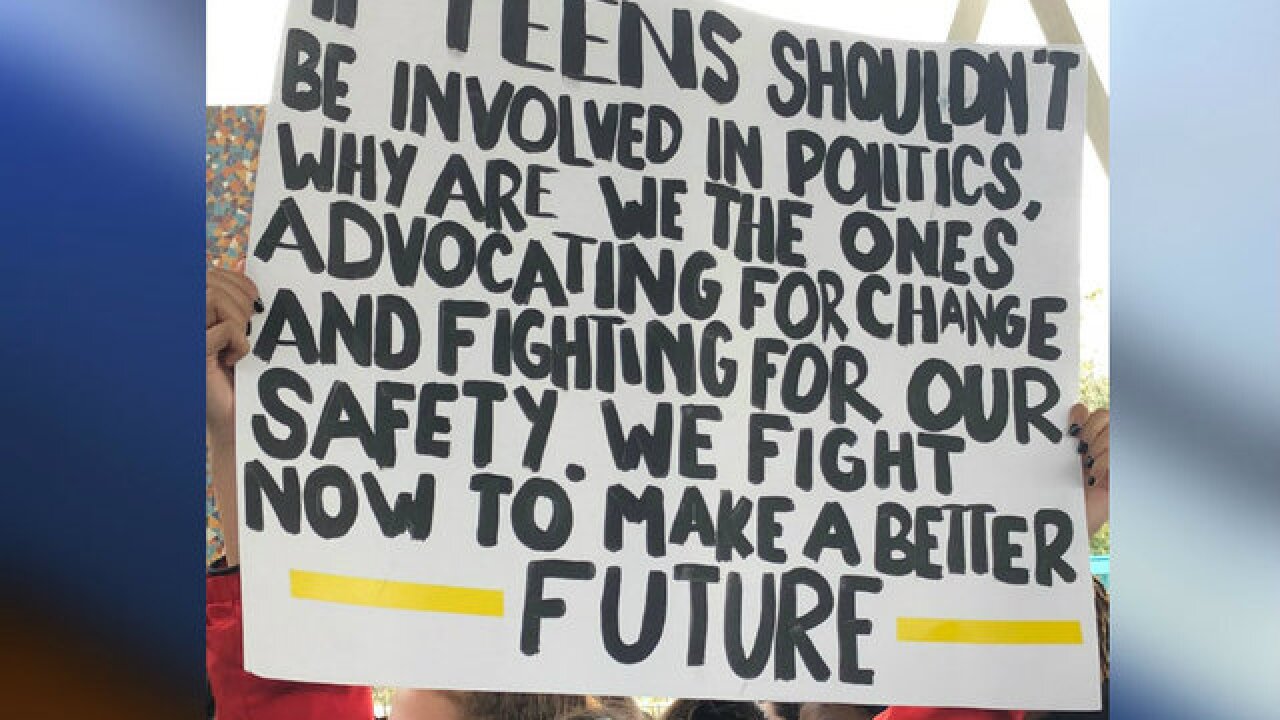 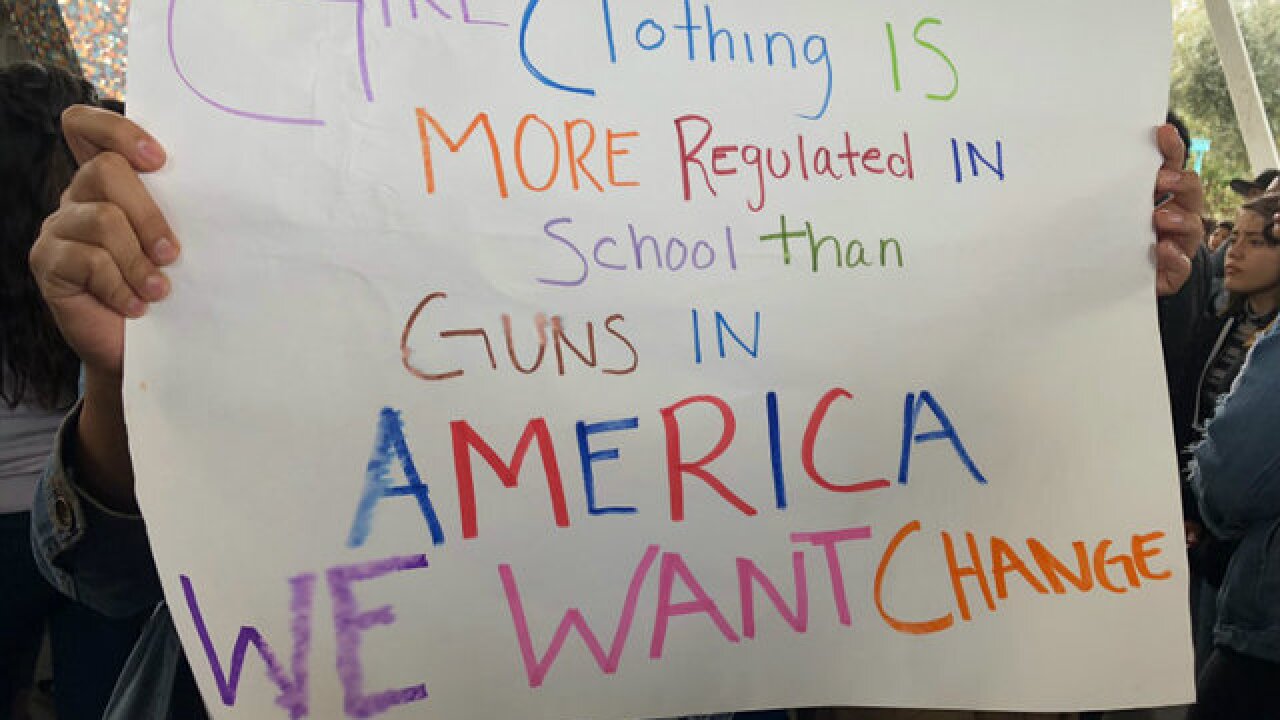 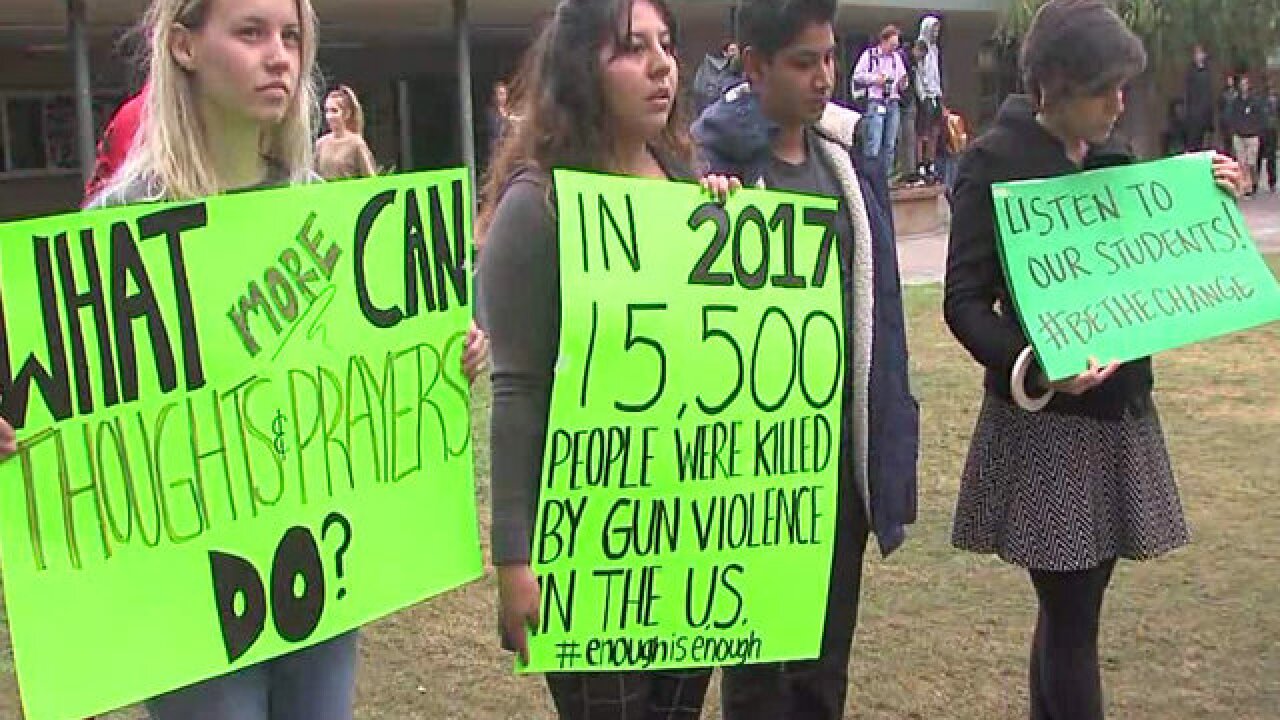 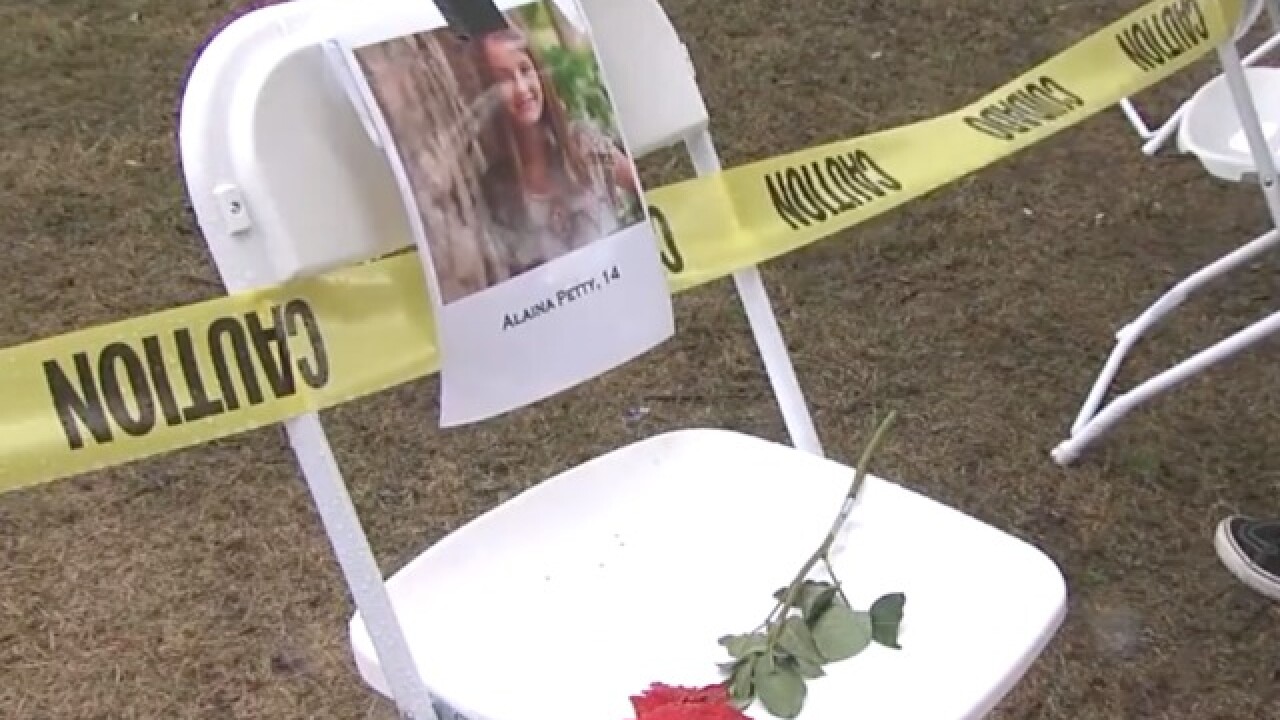 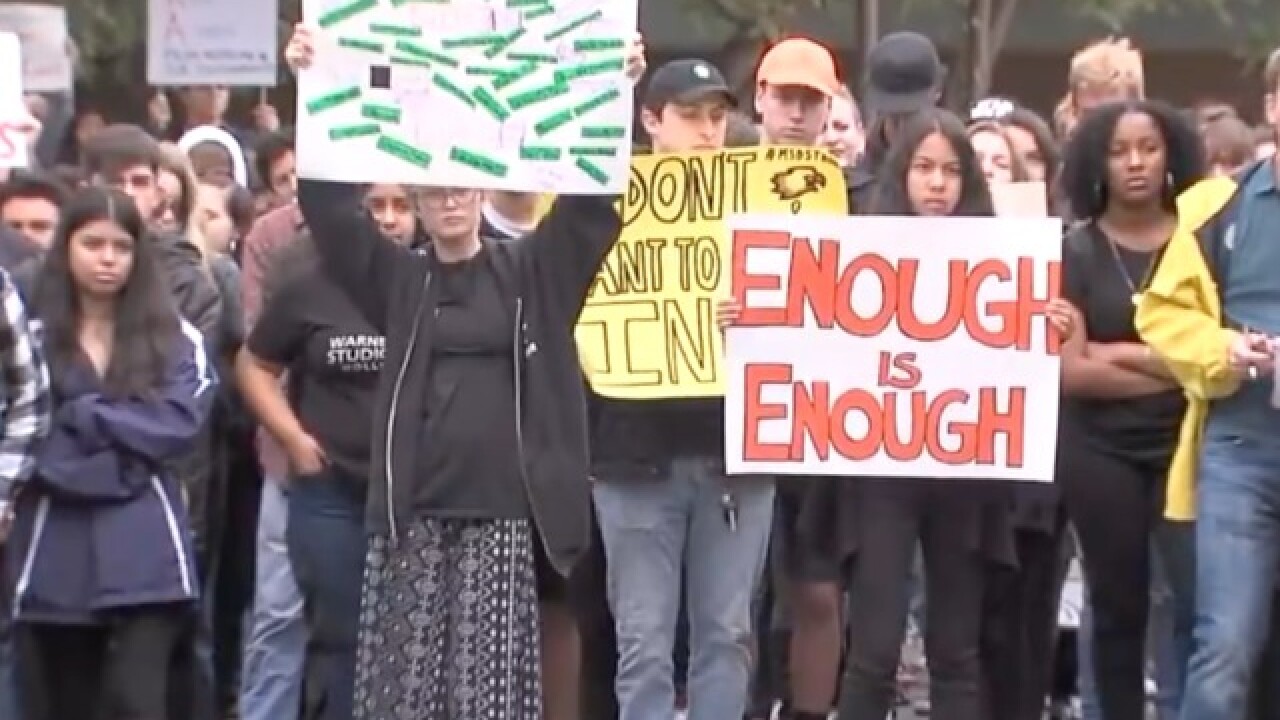 SAN DIEGO (KGTV) - Students from dozens of San Diego County schools walked out of classes Wednesday morning as part of a nationally organized event to protest gun violence in the U.S. and to honor the 17 victims in the Feb. 14 school shooting in Parkland, Florida.

The walkouts began at 10 a.m. local time and most were set to last for 17 minutes -- one minute for each victim in the Florida shooting.

RELATED: What's changed one month after the school shooting in Parkland?

In San Diego County, numerous schools held walkouts and rallies in remembrance of the shooting victims and to spur change in national gun legislation.

A student told 10News, "On February 14th, a day to celebrate love, the world lost 17 lives. Enough is enough!  How many lives must be lost before change can happen?"

Rancho Bernardo High School junior Allison Atfeld said, "I have a direct message for Congress: How many more students have to die before you're going to do something? We need gun control. It's the only way students will be protected at school."

Drew Cisse is a senior at RBHS. "Why do you need an assault rifle other than to kill multiple people; the maximum amount of people?  Nothing you need it for."

Many county schools worked with their school districts to organize walkouts.

At Patrick Henry High School in San Carlos, students honored each Parkland shooting victim with a set of empty white chairs lined in a circle. A photo of each victim was placed on each chair.

One teacher joined Rancho Bernardo High School students on #NationalSchoolWalkoutDay, telling @10News "the things they have to worry about today, they should not have to worry about as teenagers." >>> https://t.co/nSlgFGhj4n pic.twitter.com/6pRzP9r7WX

At San Diego State University, volunteers expressed the importance of voting in order to spark change to gun laws. Volunteers were at the campus to register students to vote.

The walkouts raised a number of questions about possible punishments for students. While schools can punish students, many have said they would not as long as students aren't being disruptive. The Supreme Court ruled students don't "shed their constitutional rights to freedom of speech or expression at the schoolhouse gate" in the Tinker V. Des Moines case.

RELATED: National School Walkout photos from around the U.S.

The San Diego County Sheriff’s Department said in a statement that they were aware of the walkouts and respect “everyone’s right to express themselves in a peaceful and respectful manner.”

“On Wednesday, March 14th, students and faculty at schools across the nation are expected to walkout to mark one month since the deadly shooting at a high school in Parkland, Florida. The San Diego County Sheriff's Department is aware several schools in our jurisdictions will be participating in the #ENOUGH National School Walkout. We respect everyone's right to express themselves in a peaceful and respectful manner. We would ask that students and administrators communicate with their local law enforcement particularly if they will be leaving campus to ensure their safety navigating roadways and the well-being of drivers and pedestrians. For our students: please respect the instructions of school officials and if you hear any threats of violence or even potential violence, we encourage you to talk to one of our Sheriff's School Resource Deputies. The Sheriff's Department takes every threat seriously. In addition, students can call the anonymous Crime Stoppers Students Speaking Out tip line at (888) 580-8477. Students, parents and the public can also call the Sheriff's Department at (858) 565-5200.”

According to the Women’s March website, the following San Diego County schools were set to participate in the “#Enough National School Walkout”:

Other county schools that took part in the walkout: