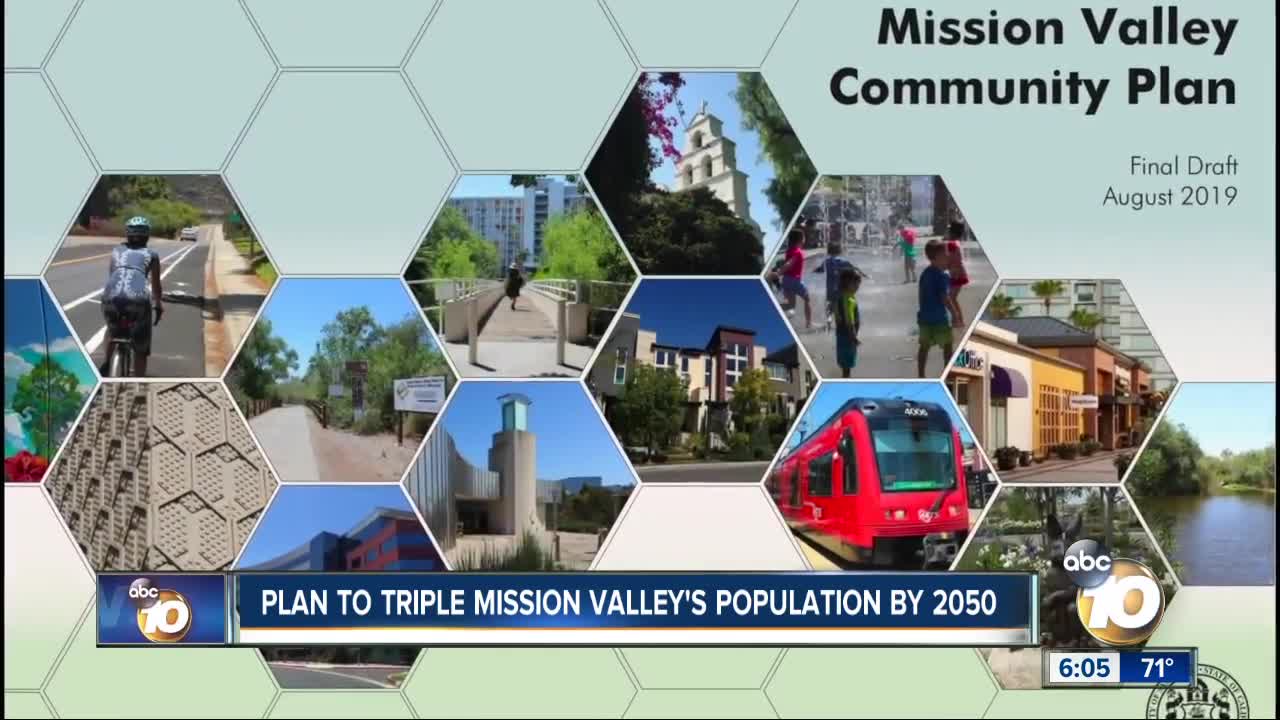 SAN DIEGO (KGTV) - A plan that has the potential to triple Mission Valley's population by 2050 will be voted on by the San Diego City Council Tuesday.

The city will vote on the final draft of the proposed Mission Valley Community Plan. It replaces the last plan that was written back in 1985. Supporters say it will help address the region's housing crisis.

"One of the biggest problems we've had in the city is our community plans haven't been updated in decades. So, whenever developers come in and want to build housing they have to get conditional use permits and that takes sometimes over years to get accomplished, and that drives the cost of housing up," said councilman Scott Sherman whose district includes Mission Valley.

Currently, Mission Valley is zoned mixed-use and residential. The new plan would rezone it to almost all mixed-use. Developers would be able to build up to 145 housing units per acre, instead of 73 units per acre.

"Apartments and condos, density around mass transit, that's the whole idea, we need housing so let's make it more dense around transit oriented hubs, cause we have the trolley that runs right through Mission Valley," said Sherman.

People who work in Mission Valley are worried that traffic will be a nightmare in an area already known for gridlock.

"It's already congested as it is, so to build more, where?" asked Eni O'Donnell.

"It depends on how well they plan integrating it all in, if you bring in 50,000 people overnight, then obviously, that's not going to work," said Archie Kordestani who lives in Civita.

The plan includes several new bike and pedestrian bridges, connectors to help with traffic, and more transit stops along the trolley's green line.

"Busing, biking, trolleys, I think these are the ways to go," said Kordestani.

If it gets final approval, builders can start applying for permits in the next few months.

"If you make the rules in place and make it easier for people to build, they'll come in and build and the price should go down, cause right now our housing crisis is really a supply issue," said Sherman.