OC escapees believed to be in San Jose or Fresno 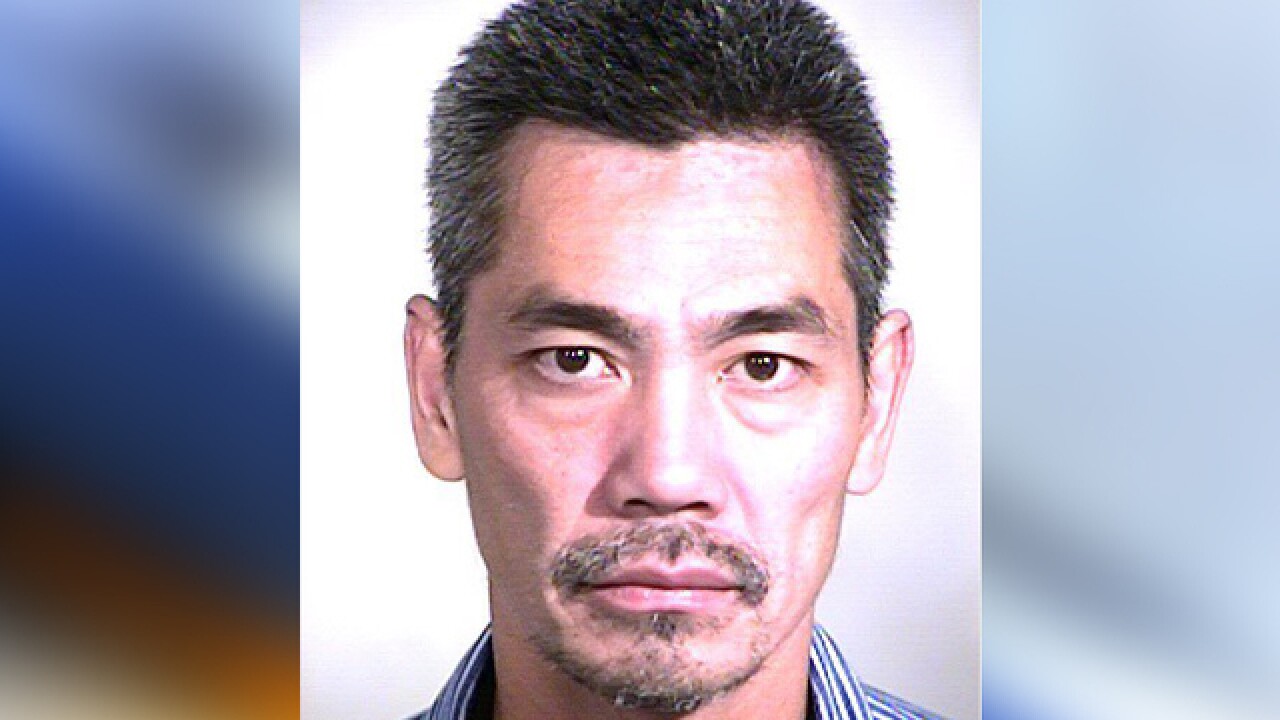 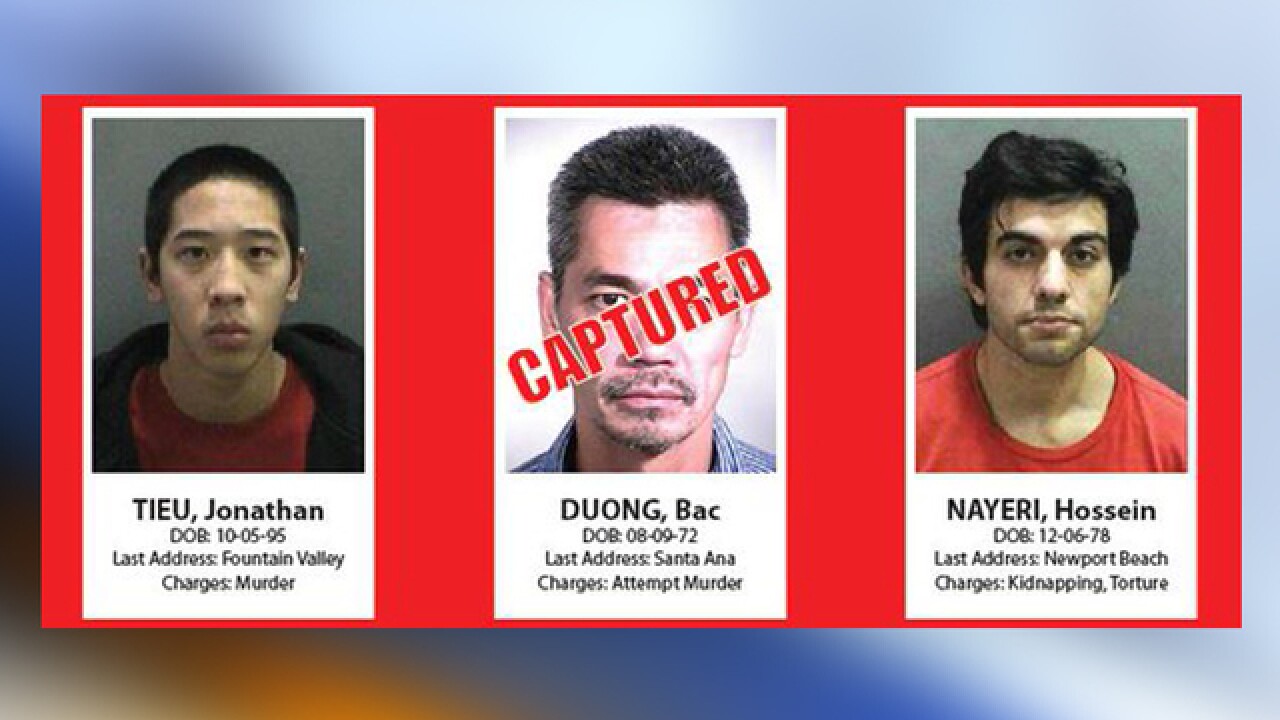 One of three inmates who escaped from the Central Men's Jail in Santa Ana was arrested Friday, but the other two inmates remained at large and were believed to be in the San Jose or Fresno areas.

Bac Duong, 43, of Santa Ana, was arrested in the 1400 block of North Harbor Boulevard, according to Santa Ana police Cpl. Anthony Bertagna. He approached a civilian, who called police at 11:21 a.m., Bertagna said.

"Approximately 25 minutes ago, Bac Duong contacted a civilian on the streets of Santa Ana and stated he wanted to turn himself in," Sheriff Sandra Hutchens said shortly after noon.

An employee of Auto Electric Rebuilders, 1421 N. Harbor Blvd., told reporters Duong walked into the store and said he wanted to surrender. Duong is apparently acquainted with the store's owner and his wife, and he spoke to the wife, who called 911, according to reports from the scene.

A white GMC Savana van that Duong stole on Saturday still has not been found. Sheriff's officials said the van was listed for sale on Craigslist, and Duong took it for a test drive in South Los Angeles, then stole it. Investigators said they believed the three escapees were living out of the van, and the windows have likely been tinted and the plates removed and replaced.

Duong has a connection to San Diego. He lived at an apartment complex in the 4100 block of Chamoune Avenue in City Heights in the 1990s.

Duong was arrested in 1995 as he tried to steal items from inside a pick-up parked outside the complex. According to court documents, witnesses captured Duong and held him until police arrived. He was charged with burglary of a vehicle and petty theft, and was sentenced to 180 days in jail.

Duong's arrest record includes 22 criminal filings, most of them in Orange County. They include a 2006 arrest for carjacking and car theft while in possession of a deadly weapon and various drug charges.

Duong faced an attempted murder charge and was being held without bail on an immigration hold pending a possible federal deportation hearing.

Still at large are Hossein Nayeri, 37, of Newport Beach, and Jonathan Tieu, 20, of Fountain Valley. The three escaped Jan. 22.

Orange County Sheriff's Lt. Jeff Hallock said all three escapees were spotted Thursday in San Jose, but Duong somehow made his way back to Santa Ana Friday to surrender.

Nayeri and Tieu, however, may be en route to Fresno. Hallock said, "There may be some associations of one of the suspects (Nayeri) in the Fresno area."

But for the time being, the search is focused on San Jose.

"I think the longer they're out of custody, the more desperate they become, and that makes them more dangerous," Hallock said.

On Thursday, a 44-year-old Lake Forest woman who taught English classes at the jail was arrested for allegedly providing information to Nayeri, who was one of her jailhouse students.

Nooshafarin Ravaghi, who works for the Rancho Santiago Community College District, had been teaching English-as-a-second-language classes at the jail since July 2014, according to Hallock.

She is also an associate faculty member at Saddleback College, according to the Mission Viejo college's website, and has her own website, The Noosha Collection, which can be found at noosharavaghi.com.

Ravaghi was booked on suspicion of being an accessory to a felony, Hallock said. She is tentatively expected to appear in court Monday. She is currently ineligible for bail, Hallock said, but authorities are expected to ask Monday that her bail be set at $500,000.

Hallock said Nayeri took her class at the jail and developed a relationship with Ravaghi, Hallock said.

"It is believed Ravaghi directly contributed to the escape of the three inmates and provided critical planning tools that aided in their preparation for the escape," Hallock said.

The exact nature of her alleged assistance was still being investigated, but she is believed to have provided information such as Google Earth maps to Nayeri -- the alleged mastermind of the escape -- showing aerial views of the jail, an adjacent women's jail and an intake center. Hallock said Ravaghi has denied providing Nayeri with any tools used in the escape.

Hallock said the extent of the relationship Nayeri developed with Ravaghi was still unclear. It's also unclear if she knew Nayeri was plotting an escape.

"We don't have any information to determine it (the relationship) was in fact romantic," Hallock said. "It was much closer and much more personal than it should have been."

Nayeri and Ravaghi are both natives of Iran. Hallock said there is no information indicating the pair were acquainted before meeting in the jail class -- a class Nayeri was taking even though he already spoke English. Their ultimate relationship, however, "leads us to believe she played a significant role in the planning" of the escape, Hallock said.

The three inmates disappeared from the jail early Jan. 22.

According to a news videographer, one of the locations was a business at Jackson Street and Westminster Boulevard and a reported hangout for some of the escapees. Nine people were at least temporarily detained at that location. The second raid, he said, took place in an industrial area at Garden Grove Boulevard and Hoover Street. No arrests or detentions were reported there.

Hallock confirmed Friday that warrants were served at a residence and a warehouse overnight, but no arrests were made.

Hallock said Thursday that around 10 people have been arrested since the escape a week ago today. Several other arrests -- for unrelated warrants or probation issues -- have also taken place during the manhunt.

The three inmates disappeared after a 5 a.m. body count in the jail, but they were not discovered missing until close to 9 p.m., when the second daily body count was conducted. Nayeri had been in custody since September 2014, Tieu since October 2013 and Duong since December.

Sheriff Sandra Hutchens said Wednesday she suspects Nayeri was the "mastermind" of the breakout based on his military training in the U.S. Armed Forces.

The search for the escaped inmates has focused heavily on a Vietnamese gang active in Westminster and Garden Grove. Hallock said there may also be connections between the escapees and Vietnamese organized crime.

On Tuesday, the Orange County Board of Supervisors quadrupled the reward for information that leads to the inmates' recapture, boosting it to $200,000. The FBI and U.S. Marshals Service pledged the initial $50,000.

Nayeri is accused of participating in an attack, including torture, against a Newport Beach resident who ran a licensed marijuana dispensary in Santa Ana. Tieu faces murder and attempted murder charges in connection with a gang hit. Duong faces an attempted murder charge and was being held without bail on an immigration hold pending a possible federal deportation hearing.

Felony escape charges were filed Monday against the three inmates. Authorities warned they should be considered armed and extremely dangerous. Anyone who spots them should call 911.