Rallies to be held ahead of President Trump's San Diego visit

Rallies were held in two locations.

The president is scheduled to arrive in San Diego -- touching down at MCAS Miramar -- Tuesday afternoon. He will make several stops, with one reportedlu in Otay Mesa to get a first-hand look at several border wall prototypes.

In response to Trump's impending arrival, two demonstrations were held in San Diego:

-- On Monday morning, at Chicano Park, several immigrant rights groups gathered to speak out against the president's "wasteful, harmful and irresponsible" border wall project. The American Friends Service Committee, San Diego Immigrant Rights Consortium and Alliance San Diego were among the organizations that are taking part in the rally.

-- At 5 p.m., outside of the Federal Building (880 Front St.), the group Union del Barrio gathered to protest Trump's San Diego visit. The group has previously denounced Trump because of his statements on the Mexican community. Organizer Adriana Jasso said, "The president's presence is completely disrespectful to many of our community members who work hard every day to make a living."

With the president's visit to the South Bay, a large area of Otay Mesa -- from Via de la Amistad to Airway Road -- will be restricted. 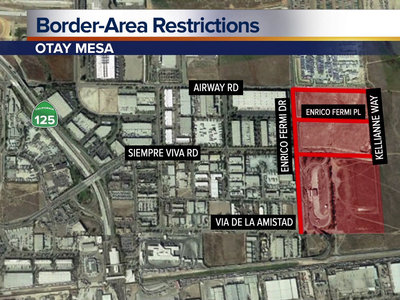