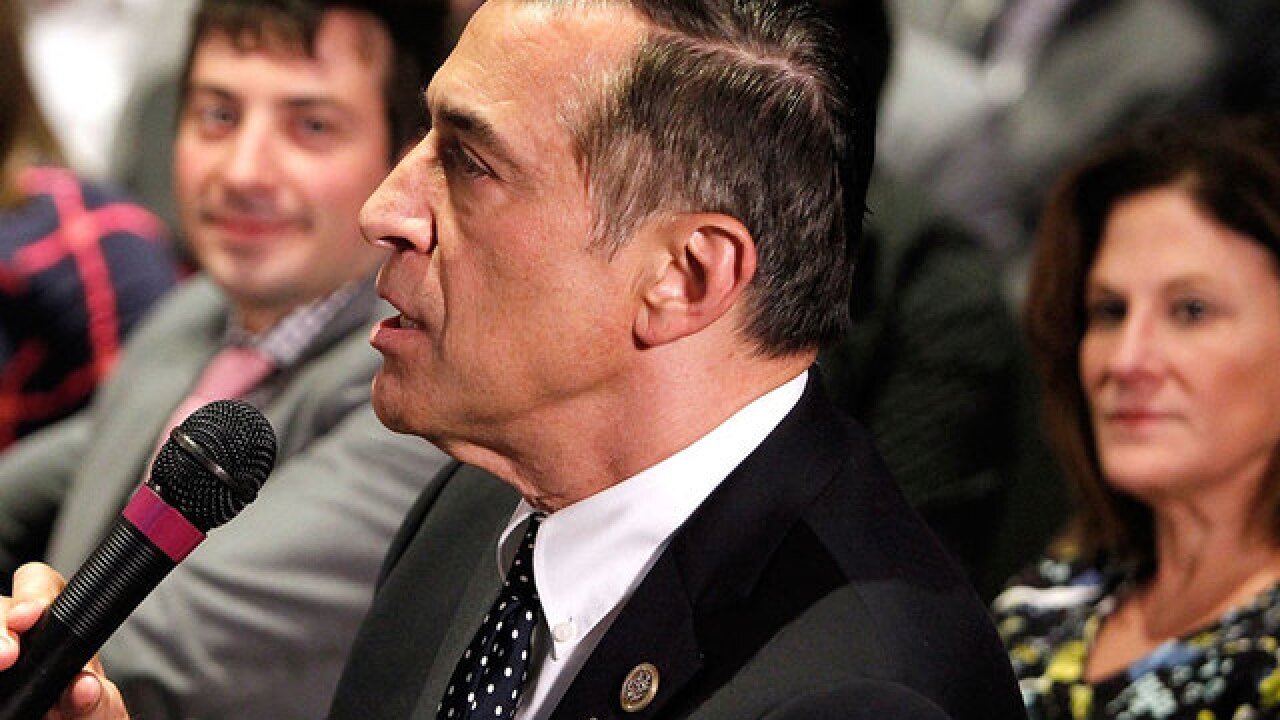 Copyright Getty Images
Paul Morigi
Rep. Darrell Issa (R-CA) asks a question at the Showtime-presented finale reception and discusson of the second season of THE CIRCUS: INSIDE THE BIGGEST STORY ON EARTH at The Newseum on May 3, 2017 in Washington, DC.

SAN DIEGO (KGTV) - Reaction poured in Wednesday after Republican Rep. Darrell Issa (CA-49) announced he would not seek re-election in 2018 and intended to retire.

Issa, who has been in office for 18 years, said: "While my service to California's 49th District will be coming to an end, I will continue advocating on behalf of the causes that are most important to me …"

Many shared their thoughts regarding Issa's decision:

Democrat Doug Applegate, who lost to Issa in 2016 and is running for the 49th District seat this year:

Don’t worry @darrellissa we’ll take care of CA-49. A blue wave is coming San Diego and OC! We came within spitting distance in 2016 and we’ll take it all the way in https://t.co/JjqSz4YX0b can donate to our campaign here --> https://t.co/wckdRvly6M…#TeamApplegate #BlueSanDiego https://t.co/gqBBlAgfiU

Kudos to the passionate and persistent #Flipthe49th volunteers who showed up week after week to protest at Darrell Issa’s district office. This wouldn’t have happened without your hard work. #CA49 https://t.co/fqpnIIDlxK

"As evidenced by his work as Oversight Chairman, Congressman Darrell Issa is a fearless protector of integrity in government. His retirement is a great loss for the institution and the American people. We are truly grateful for his service.

In the 49th district, Democrats are locked in what is fast becoming one of the bloodiest primaries in America. While Democrats fight with each other, Republicans will focus on fighting Democrats – and that's how we plan to win. We look forward to facing whoever limps out of the Democrats' battle royale: black and blue, and broke."

Another one bites the dust. Republicans should understand that continued support for Trump's policies is a surefire recipe to lose their seat in 2018. https://t.co/0GAvWM468V

I wish @DarrellIssa well in his retirement. You’d never believe it, but we co-chaired the #SharingEconomy Caucus together. Farewell, Darrel!

Also, this moves me one spot closer to being the richest person in Congress (currently hovering around 425th).

"The Republican agenda in Washington has been a direct attack on Californians. After passing a devastating tax scam and fighting to rip away healthcare from millions of families, California Republicans clearly see the writing on the wall and realize that their party and its priorities are toxic to their re-election chances in 2018.

Secretary Clinton won this district by a huge margin in 2016, and the cohort of strong Democratic challengers, unprecedented grassroots activism, and historic investment by the DCCC in Southern California means we are in a strong position to elect a Democrat to the 49th District this fall."

"For years, Rep. Darrell Issa put cashing checks from the gun lobby before strengthening laws to keep the public safe. Just weeks ago, in the wake of two of the nation's worst mass shootings, he voted in favor of a bill that would allow stalkers and domestic abusers to carry concealed weapons in California. Issa chose to be in lockstep with the desires of the gun lobby over his community's safety, we called him out, and now he'll be gone from Congress. His resignation shows that his district does not want someone who will blindly follow the gun lobby's agenda that prioritizes profits over anything else. We're going to continue our work in California to make sure that Issa's seat will be filled by someone who will have the courage to stand up to the gun lobby and put the safety of California communities first."

Mike Levin, a candidate for the 49th District seat from Orange County:

As much as I am looking forward to running one-on-one against @DarrellIssa later this year, it’s best for the residents of the 49th Congressional District that he leave sooner rather than later.

Issa saw the writing on the wall. We’re going to take back the House of Representatives in 2018 and that all starts with flipping #CA49. Chip in today: https://t.co/JWfgvMulOU https://t.co/aiQCBHv9XZ

"When initially discussing the idea of running for Congress with my wife, Erika, we weighed the options of whether to run in District 49, where our business is located and where most of our friends and business contacts live, or District 50 where we reside. At the time, I thought the people of District 50 most needed the things that I can bring to Congress, however, now with Rep. Issa retiring and no Republican candidate on the ticket, it is clear that I must amend the direction of our campaign and seek office in District 49."