(KGTV) - Gavin Newsom and Dianne Feinstein are leading in their respective races heading into the final week before the June 5 California primary election, according to a new poll.

The latest scientific 10News/San Diego Union-Tribune poll, conducted by SurveyUSA, focuses on the state’s race for governor and U.S. Senate. For the poll, 1,100 California adults were interviewed; 952 of them were registered to vote and 678 were likely to vote in primary.

According to the poll, the Democrat Newsom and Republican John Cox appear to be headed to a November showdown to be California’s next governor.

Newsom, the current lieutenant governor, leads with 33 percent of the vote, followed by Republican John Cox at 17 percent. Republican Travis Allen is the only other candidate to finish in double-digits, with 12 percent of the vote. Former Los Angeles Mayor Antonio Villaraigosa lands in fourth on the latest poll at 8 percent.

The poll shows a majority of support for Newsom comes from the Bay Area, where he served as mayor of San Francisco several years ago. Newsom has support from 55 percent of Democrats and 52 percent of liberals.

Cox’s support comes mostly from Inland Empire and Central Valley voters, with 42 percent of Republicans and 46 percent of conservatives backing him.

In the primary for Governor of California, how do you vote? 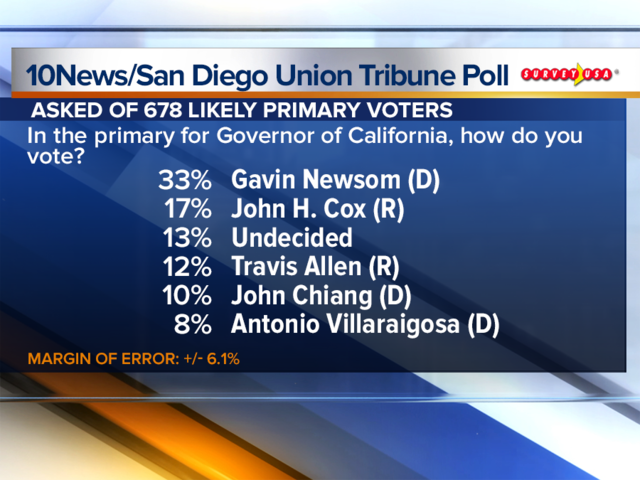 In the U.S. Senate race, incumbent Democrat Dianne Feinstein appears to be a virtual lock for the November run-off, but the race to oppose her remains fairly tight.

Feinstein, according to the poll, has 36 percent of the vote heading into the primary. She is followed by Democrat state Sen. Kevin De Leon at 11 percent and Republican businessman James Bradley at 9 percent.

The 84-year-old Feinstein is looking to serve her fourth full term in the U.S. Senate.

In the primary for United States Senator from California, how do you vote? 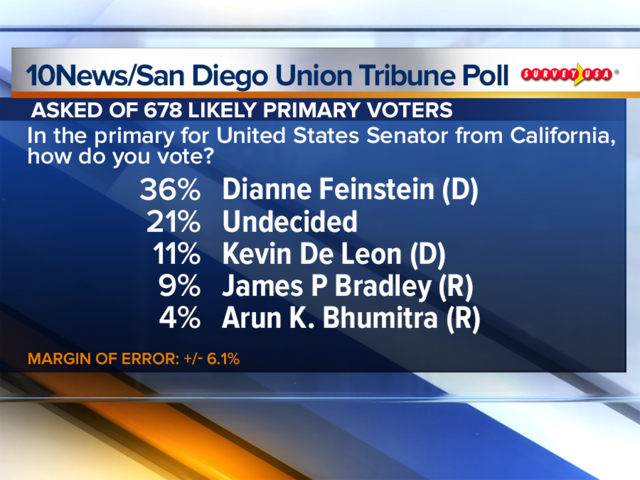