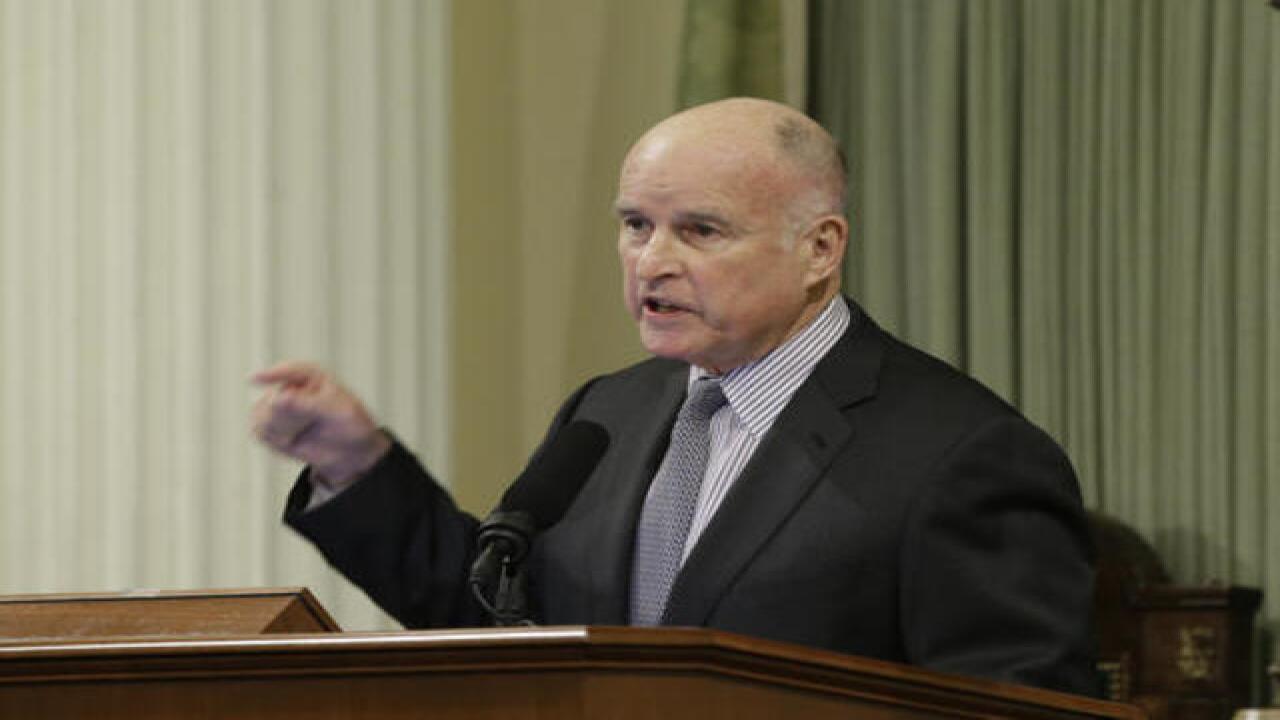 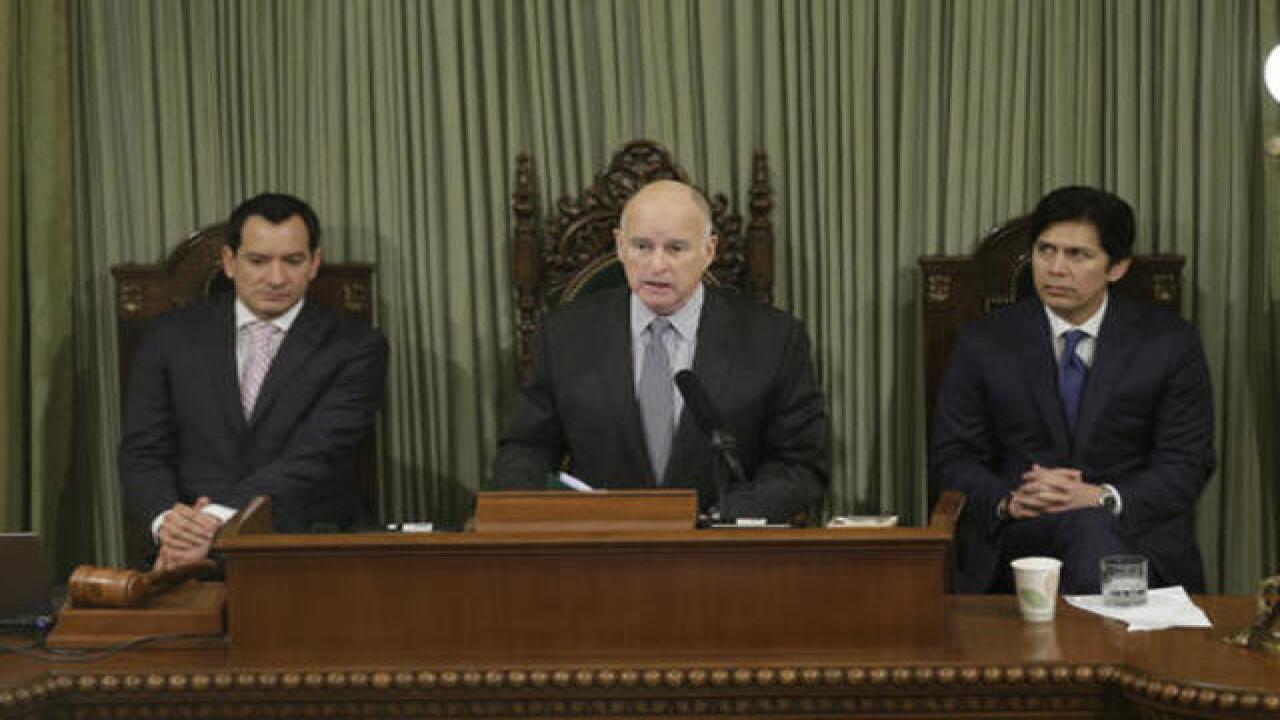 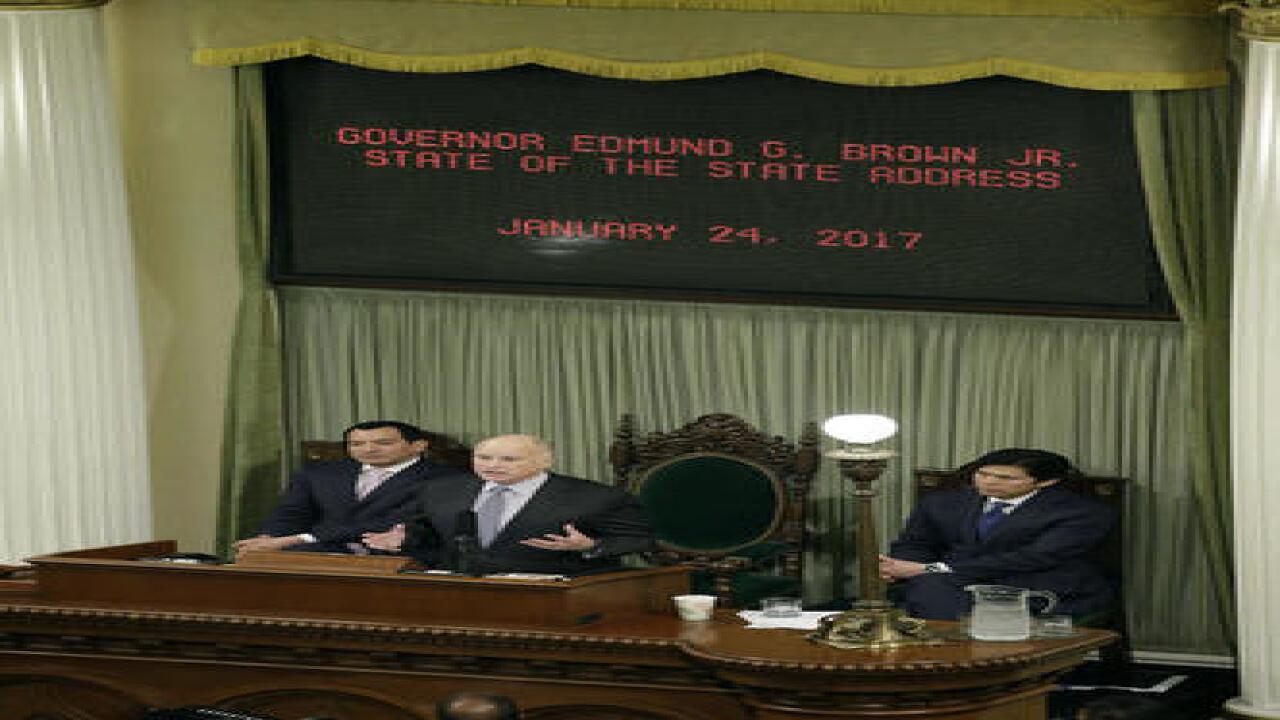 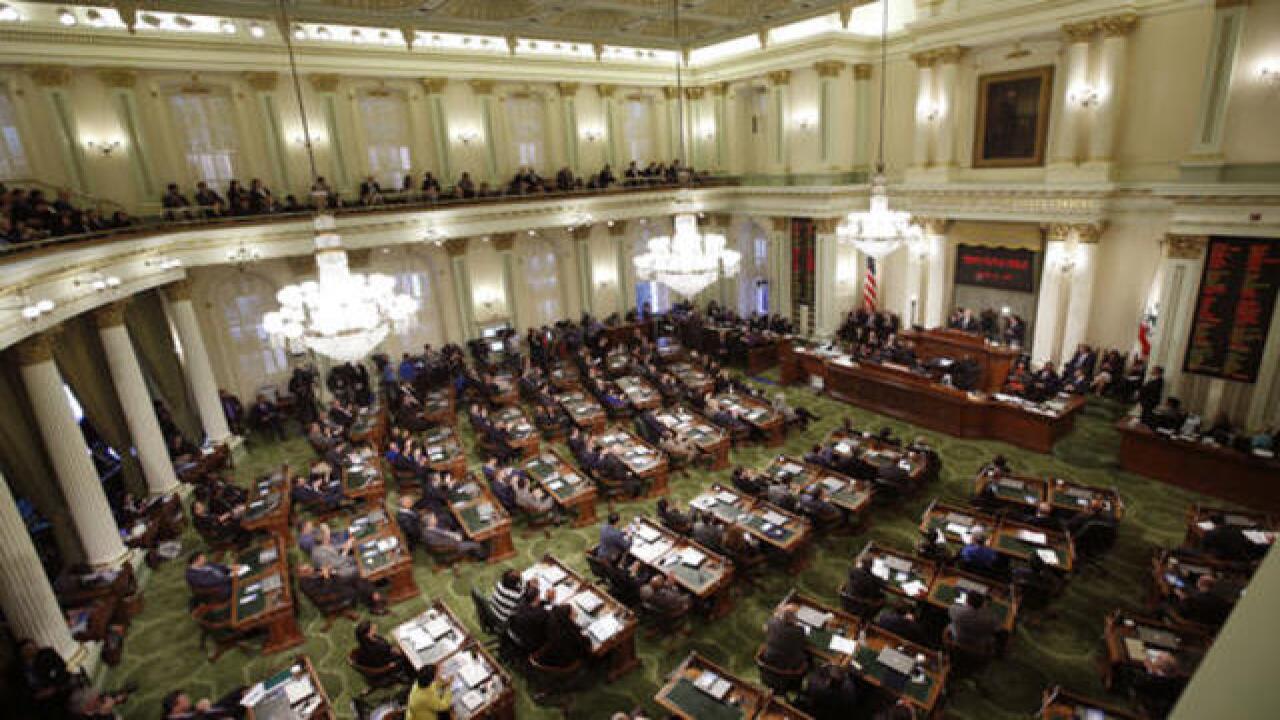 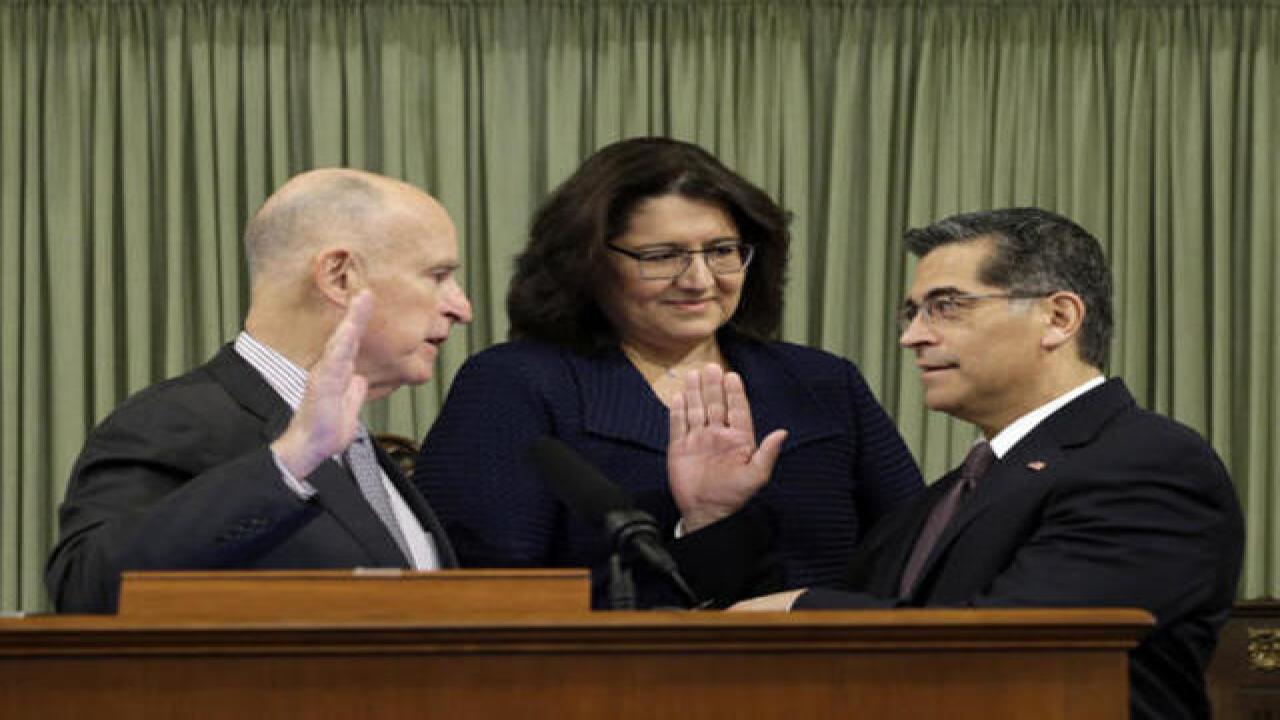 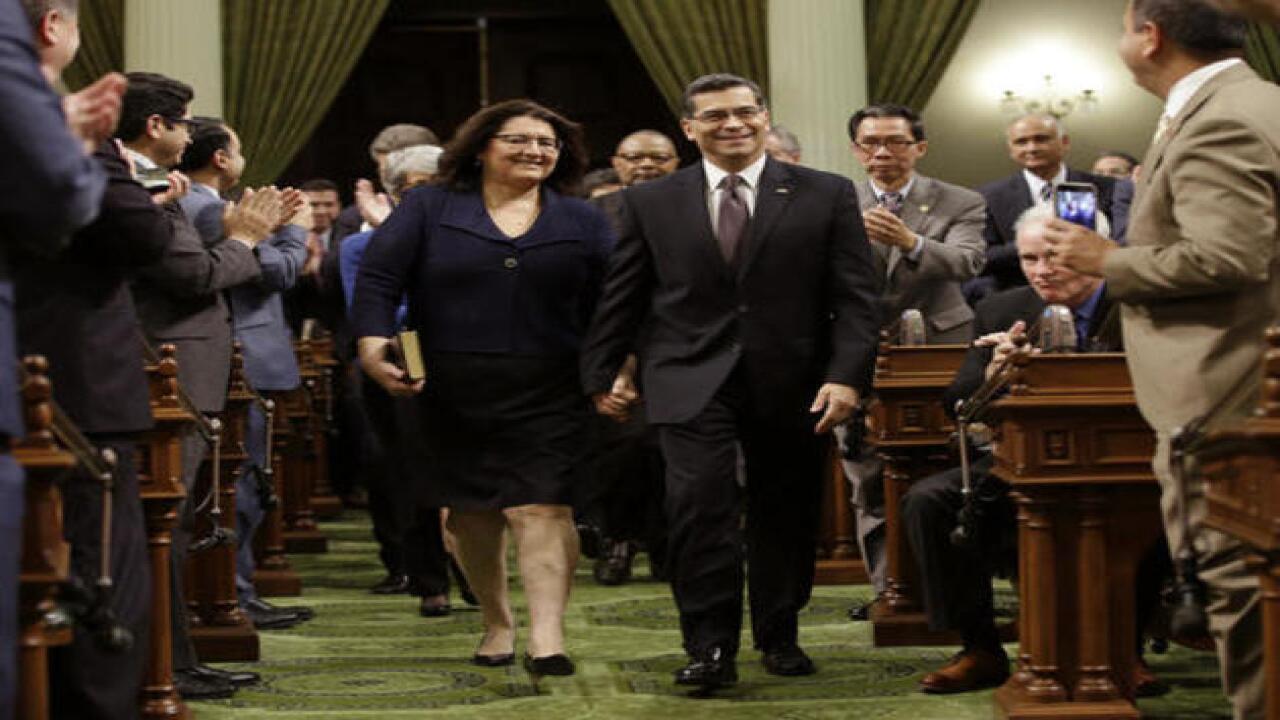 SACRAMENTO, Calif. (AP) — Gov. Jerry Brown delivered an aggressive defense on Tuesday of California's liberal policies on immigration, health care and climate change during his State of the State address, vowing to fight the Trump administration and Republicans in Congress if they threaten to roll back state policies.
"California is not turning back. Not now, not ever," Brown said.
The Democratic governor, who has made fighting climate change a legacy issue, also noted the state's successes in cutting unemployment, closing a multibillion-dollar deficit, boosting school funding and expanding rights for immigrants who are in the country illegally.
However, he said it's hard to keep his eyes trained on California after the election of President Donald Trump.
"While no one knows what the new leaders will actually do, there are signs that are disturbing. We have seen the bold assertion of 'alternative facts.' We have heard the blatant attacks on science," Brown told a joint session of the Legislature. "Familiar signposts of our democracy — truth, civility, working together — have been obscured or swept aside."
The election of Trump and a Republican Congress has upended the order of California Democrats, who have pursued aggressive greenhouse gas-reduction policies with backing from the previous presidential administration.
The state also embraced the federal health care law and committed billions of dollars to expanding Medi-Cal, the state's health insurance program for the poor. Brown noted that while more than 5 million people now have access to health care, it comes with billions of dollars in federal funding that could be jeopardized.
"Were any of that to be taken away, our state budget would be directly affected, possibly devastated," Brown said, adding that he would join lawmakers and other governors to do whatever he can to protect peoples' health care.
Earlier Tuesday, Trump dealt a blow to former President Barack Obama's legacy on climate change, signing executive actions to advance the construction of the Keystone XL and Dakota Access oil pipelines, a move cheered by congressional Republicans and decried by environmentalists.
Obama stopped the proposed Keystone XL pipeline in late 2015, declaring it would have undercut U.S. efforts to clinch a global climate change deal that was a centerpiece of his environmental legacy. The Army decided last year to explore alternate routes for the Dakota pipeline after months of protests.
Brown, however, urged fellow Democrats who have a supermajority in both houses of the Legislature to embrace a spirit of collegiality that been absent in presidential politics and work with their Republican colleagues.
Assemblyman Tom Lackey, R-Palmdale, said he hopes it was "a genuine invitation for collaboration."
"However, his address did not give me confidence that we will be moving forward on issues that matter most to Californians," Lackey said in a statement. "Skyrocketing housing costs, declining middle-class job prospects and rising violent crime rates were not even mentioned in the address."
One area of agreement — at least on the need for improvements, if not how to pay for them — involves infrastructure, where Brown said there may even be consensus with the Trump administration.
Assembly Republican Leader Chad Mayes, R-Yucca Valley, said California's failure to fund a multibillion-dollar transportation backlog leaves the state no choice but to work with its federal counterparts.
"And yet you hear all of this rhetoric that comes out of leaders to try to incite folks instead of trying to unite folks," Mayes said.
Brown is coming off a blockbuster year of liberal wins. He secured an extension of landmark climate change legislation, signed off on an increase in California's minimum wage, expanded family leave laws, toughened gun laws and persuaded voters to soften sentencing laws and reject a ballot measure that would have threatened two of his legacy projects involving high-speed rail and water transport.
Brown is now projecting a $1.6 billion budget deficit and proposing $3 billion in spending cuts, largely to social programs that his fellow Democrats support.
The state's plan on climate change involves rolling back carbon emissions 40 percent below 1990 levels by 2030.
To drive home the point, the Brown administration sent a new version of the plan to reporters just minutes after Trump's inauguration.
Before his address, Brown swore in his new state attorney general, Xavier Becerra, a Southern California congressman who has vowed to defend California's policies liberal policies and protect minority communities.
AP writer Sophia Bollag also contributed to this report.
Copyright 2017 The Associated Press. All rights reserved. This material may not be published, broadcast, rewritten or redistributed.
Copyright 2017 The Associated Press. All rights reserved. This material may not be published, broadcast, rewritten or redistributed.