For voters, Election Day presents a big test for Trumpism 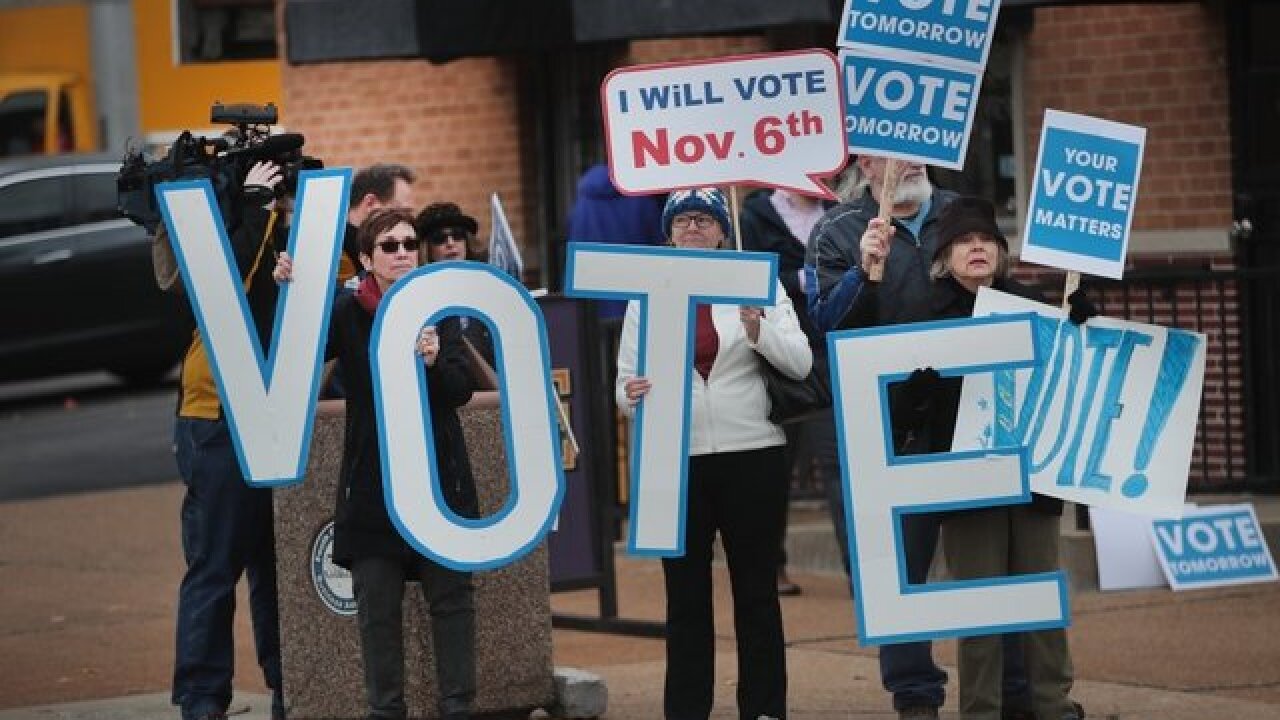 (AP) - There were first-time voters and straight-ticket voters and some who, this go-around, switched sides. They went to the polls considering the caravan of migrants trudging across Mexico, their health insurance and their paychecks, an impotent Congress and the nation's poisonous political culture that has divided even families and friends along party lines.

More than anything on this Election Day in America, in a midterm contest like no other before it, voters cast their ballots with one man in mind: President Donald Trump.

"I would have never thought this country would elect Donald Trump as president," said Kimball Blake, 61, a Knoxville, Tennessee, energy engineer who called Trump's presidency a "profound factor" in his decision to vote Democratic in his state's U.S. Senate race. "It got me out to vote this year, not that it usually takes that much motivation."

Americans turned out in droves Tuesday — some lining up before the sun rose, some standing for hours or braving pouring rain or snow — to vote in an election that will determine control of Congress and render a verdict on Trump's first two years in office. The outcome could redefine the nation's political landscape for months and years to come.

Democrats need to gain 23 seats to take control of the House of Representatives, and hope to ride the wave of liberal fury that organized after Trump's surprising victory in 2016.

"My loathing for him knows no bounds," said Kathleen Ross, a 69-year-old retired professor, as she cast her ballot for Democrats in Olympia, Washington, confident the country will eventually reject Trumpism and the divisive governing it represents. "I tend to think the arc of the universe bends toward justice, so I don't become discouraged."

Trump has sought to counter some of that rage by stoking anger and fear in his base. In recent weeks, he's put the spotlight on a caravan of Central American migrants fleeing poverty and violence that he calls "an invasion" of criminals and terrorists. He ran an advertisement about immigration so racially incendiary that all three major cable news networks, including Fox News, either refused to air it or eventually decided to stop showing it.

Among some Republican voters, that message resonated.

"What's going on right now is pretty scary to me, at the border, with all those people coming, and I don't think I'm hardhearted or anything," said Patricia Maynard, a 63-year-old retired teacher in Skowhegan, Maine.

When she voted for Trump in 2016, the blue-collar economy was her primary concern. Now, she said, immigration tops the list. She laments that Congress has so far failed to pass legislation to build the wall Trump promised along the border. So she voted for Republicans Tuesday, with hopes they would retain control and push Trump's agenda.

In Westerville, Ohio, Judy Jenkins cast her vote at a suburban church and said she supports Trump's decision to send military troops to the U.S.-Mexico border to intercept the caravan — a move critics say is unnecessary and a political stunt, given the migrants are traveling mostly on foot and remain hundreds of miles away.

"We don't know what that caravan is bringing," said Jenkins, who describes Trump as "my guy," though she concedes she cringes at some of what he says. "Who's perfect?" she said.

For many on the other side of the political aisle, the caravan controversy singularly represents what they find unconscionable about Trump's presidency.

"He's always used the scare tactics and found an enemy to band against," said 24-year-old Enrique Padilla of Grand Rapids, Michigan. Padilla considers his own family an example of the American dream. His father migrated from Mexico as a laborer at 18, raised his family, and now Padilla has a college degree. The president's persistent demonization of immigrants galvanized him and many of his peers to vote against Republicans, Padilla said.

In Louisville, Kentucky, Mary Cross, a 64-year-old African-American voter, said she believes Trump uses issues like immigration to distract from more important topics, and in doing so infuses fear and distrust into society. "It's manufactured fear. It's uncivilized. It's just a bunch of mayhem for nothing. There's no substance to this," said Cross, who thinks the country should be talking about the Republican-led campaign to overturn the Affordable Health Care Act that protects people with pre-existing conditions.

Cross, and others, expressed a heightened sense of unease and sadness about the state of America's political climate. The election comes just days after a series of hate crimes and political attacks, including the arrest of a man who mailed pipe bombs to Trump critics whom the president often derides as "evil," ''un-American," and "the enemy." Where Cross lives, a gunman tried to get into a majority-black church but found the doors locked and went instead to a nearby grocery store, where he gunned down two elderly African-American shoppers in what police are calling a hate crime.

"Our president, with his rhetoric and vulgar language, continues to throw fuel on the fire. Racism has always been around, but since he's been in office, people feel free to express it and feel good about it," said the Rev. Kevin Nelson, the pastor of the Louisville church the gunman tried and failed to enter. The congregation has received cards and calls from all over the country, from Christians and Jews and Muslims and atheists — and also a white man in Texas who said he was sorry about what happened and promised to cast his ballot against the rhetoric he believed to be igniting hate.

"You're always hoping that somehow, some way, someday, it's going to change," Nelson said before he voted Tuesday. "I'm hopeful that it could this time."

Many voters said the political tribalism has infested their everyday lives. The Simon Wiesenthal Center released a survey on the eve of the election that showed a quarter of Americans have lost friends over political disagreements and are less likely to attend social functions because of politics.

Odell White, a 60-year-old African-American conservative, described the state of the country's political discourse as veering toward civil war.

"We are dangerously close to that type of mentality — brothers fighting brothers. That's how bad it is," said White, who supports Trump and voted Tuesday for Republicans. Friends have turned away because of his political leanings. White said he doesn't like the president's aggressive rhetoric, but he's willing to overlook it because of the booming economy and the two conservatives Trump installed on the Supreme Court.

But Trumpism has proved too much for some.

In Portland, Maine, Josh Rent, 43, a small business owner and registered Republican, said he voted mostly for Democrats all the way down the ballot for the first time to protest Trump, who he believes is unnecessarily dividing Americans for his own gain.

"He's just nasty," he said. "Life doesn't have to be this nasty, in my opinion."