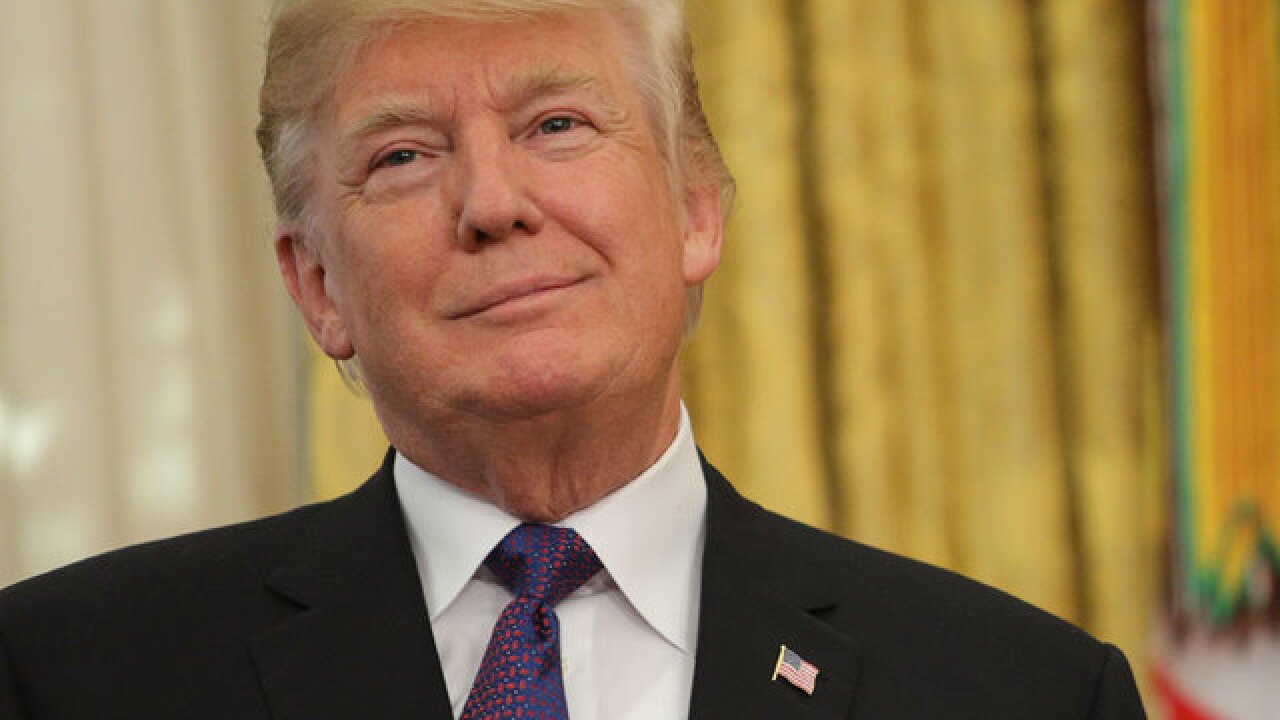 Copyright Getty Images
Oliver Contreras/Pool
U.S. President Donald Trump hosts members of the Native American code talkers during an event in the Oval Office of the White House, on November 27, 2017 in Washington, DC. Trump stated, "You were here long before any of us were here. Although we have a representative in Congress who they say was here a long time ago. They call her Pocahontas." in reference to his nickname for Sen. Elizabeth Warren.

Democratic leaders decline to meet with Trump after Twitter attack
-- President Trump was set to meet with congressional leaders from both parties Tuesday regarding federal funding, but top Democrats have reportedly pulled out of their meeting with the president after statements he made on Twitter.

On Tuesday morning, Trump tweeted: "Meeting with 'Chuck and Nancy' today about keeping government open and working. Problem is they want illegal immigrants flooding into our Country unchecked, are weak on Crime and want to substantially RAISE Taxes. I don't see a deal!"

House Democratic Leader Nancy Pelosi and Senate Democratic Leader Chuck Schumer were scheduled to meet with Trump, along with GOP Leader Mitch McConnell and Speaker of the House Paul Ryan, to discuss ways to after a potential government shutdown.

However, following the tweet, Pelosi and Schumer issued a joint statement explaining why they are not heading to the White House for the meeting.

"Given that the President doesn't see a deal between Democrats and the White House, we believe the best path forward is to continue negotiating with our Republican counterparts in Congress instead. Rather than going to the White House for a show meeting that won't result in an agreement, we've asked Leader McConnell and Speaker Ryan to meet this afternoon. We don't have any time to waste in addressing the issues that confront us, so we're going to continue to negotiate with Republican leaders who may be interested in reaching a bipartisan agreement.

If the President, who already said earlier this year that 'our country needs a good shutdown,' isn't interested in addressing the difficult year end agenda, we'll work with those Republicans who are, as we did in April. We look forward to continuing to work in good faith, as we have been for the last month, with our Republican colleagues in Congress to do just that."

In response, Ryan and McConnell issued a joint statement:

"We have important work to do, and Democratic leaders have continually found new excuses not to meet with the administration to discuss these issues. Democrats are putting government operations, particularly resources for our men and women on the battlefield, at great risk by pulling these antics. There is a meeting at the White House this afternoon, and if Democrats want to reach an agreement, they will be there."

Meanwhile, the president and several Republican senators are meeting Tuesday in hopes of getting on the same page as a crucial vote on the tax reform plan looms.

Two GOP senators have said they would vote against the tax plan, while some are believed to be on the fence. Republicans can only have two no votes or the bill will be killed.

A Senate committee is scheduled to vote on the plan Tuesday, which could mean the bill heads to the full Senate by Thursday.

The Congressional Budget Office says the Senate bill would raise the federal deficit by $1.4 trillion over the next 10 years.

According to the CBO, the tax plan would also hurt Americans making $40,000 or less a year and benefit those making more than $100,000.

During Monday's event, Trump referred to Democratic Sen. Elizabeth Warren as "Pocahontas" without saying her name.

He said, "You were here long before any of us were here. Although we have a representative in Congress who they say was here a long time ago. They call her 'Pocahontas.'"

What @realDonaldTrump said about my partner @SenWarren is a slur. It disparages the Native American war heroes, standing right beside the President, who risked their lives to protect his right to make such a disgusting comment.

POTUS made a reference to "Pocahontas" a/k/a Elizabeth Warren in his remarks and they're standing in front of a portrait of Andrew Jackson who, among other things, signed the Indian Removal Act which led to the death of 15,000 Native Americans https://t.co/FdbMyzwWuq https://t.co/PbL83hLUsY

Republican Tara Setmayer reacts to Trump’s “Pocahontas” remark: “We have an Archie Bunker in Chief who is disrespecting American Indians, making classless jokes from the podium when it was supposed to be a ceremony to honor people” https://t.co/IRtzgdImgV https://t.co/LIrbdoA4oD

In the past, Trump has used Pocahontas to mock Warren's claims that she is part Native American. White House officials said Warren lied about her heritage to benefit her career.

Warren responded in an interview with MSNBC, saying, "It is deeply unfortunate that the President of the United States cannot even make it through a ceremony honoring these heroes without having to throw out a racial slur."

The National Congress of American Indians also called what Trump said a "slur" and said it overshadowed the true purpose of the ceremony.

At least 24 players kneeling this weekend at NFL stadiums that are now having a very hard time filling up. The American public is fed up with the disrespect the NFL is paying to our Country, our Flag and our National Anthem. Weak and out of control!

Melania, our great and very hard working First Lady, who truly loves what she is doing, always thought that “if you run, you will win.” She would tell everyone that, “no doubt, he will win.” I also felt I would win (or I would not have run) - and Country is doing great!

Trump's remarks at the Monday ceremony honoring Native American code talkers were immediately condemned, though Scaramucci told CNN's Chris Cuomo on "New Day" it was reflective of "the style that got him elected."

"I don't think he'd be in the office if he didn't have that style," he added.

In the interview, Scaramucci also noted Trump and Warren's tense relationship due to the fact she has been one of the president's fiercest critics.

"Well, I think that she's been nasty to him, and he's been concurrently nasty to her," Scaramucci said.