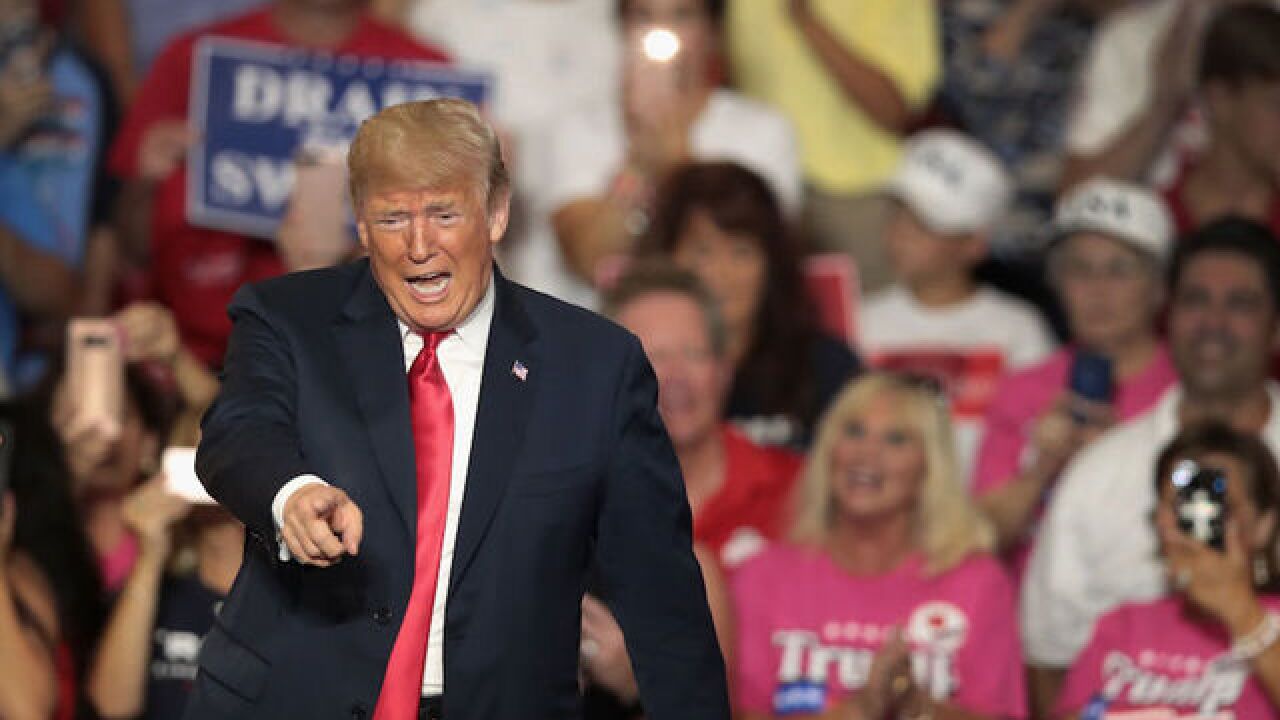 In an early morning tweet, Trump described the measures as "the most biting sanctions ever" and warned they would "ratchet up to yet another level" in November, when U.S. sanctions on Iranian oil will be reimposed.

"I am asking for WORLD PEACE, nothing less!" Trump added.

Trump's warning appeared to be aimed at the European Union, which is attempting to protect European businesses trading in Iran from facing U.S. sanctions.

U.S. sanctions are being unilaterally reimposed on Iran in waves following Trump's decision to withdraw from the Iranian nuclear deal earlier this year.

Trump Jr. downplays "bait and switch" Trump Tower meeting
-- The President's eldest son Donald Trump Jr. downplayed Monday a 2016 meeting between top campaign aides to his father and a Russian lawyer, saying the highly scrutinized engagement "ended up being about essentially nothing that was relevant" to questions of collusion.

The remarks, which came during a friendly interview on The Laura Ingraham Show, came after President Donald Trump wrote on Twitter the June 2016 meeting was intended to get damaging information on his Democratic opponent Hillary Clinton — contradicting a statement he dictated when the meeting came to light a year ago.

In the interview Monday, Trump Jr. said the session lasted 20 minutes, and maintained the central focus was on adoptions — even as he conceded the Clinton dirt was how the Russian lawyers secured the meeting in the first place.

"(Adoptions) was the primary thing that we had spoken about in the meeting," Trump Jr. said. "You know that's not the premise that got them in the room and then they started it was essentially a bait and switch to talk about that, and everyone has basically said that in testimony already."

Smith now has regrets about his involvement.

Kushner was seeking to erase Observer stories that were "critical of his commercial real estate colleagues," Smith said in a Hacker News message board post.

Back then, Kushner was the publisher of the Observer. Now he is a senior adviser to President Trump.

Smith said he was inspired to speak out by a recent Hacker News discussion about unethical behavior, plus the president's usage of extreme "enemy of the people" rhetoric to attack journalists.

"I didn't know any better then, but I do now," Smith said in a series of tweets on Monday.

He said he is sorry for deleting stories by Observer staff members.

BuzzFeed highlighted the deletions on Monday. A "handful of articles" were affected. The White House press office did not respond to requests for comment.

The resolution to request the removal of Trump's star's was unanimously adopted by the West Hollywood City Council but is not legally binding as the city has no jurisdiction over the Hollywood Walk of Fame.

"The West Hollywood City Council did not pass the resolution because Donald Trump is a conservative or a Republican. Earning a star on the Hollywood Walk of Fame is an honor. When one belittles and attacks minorities, immigrants, Muslims, people with disabilities or women -- the honor no longer exists," he told CNN.

Duran said the council had never previously asked for a star to be removed: "Never have we intruded into our neighboring city's business like this. But the circumstances compelled us to make an exception to the rule."

The Hollywood Chamber of Commerce, which does have jurisdiction over the iconic tourist attraction, said Trump's star was safe for the time being.