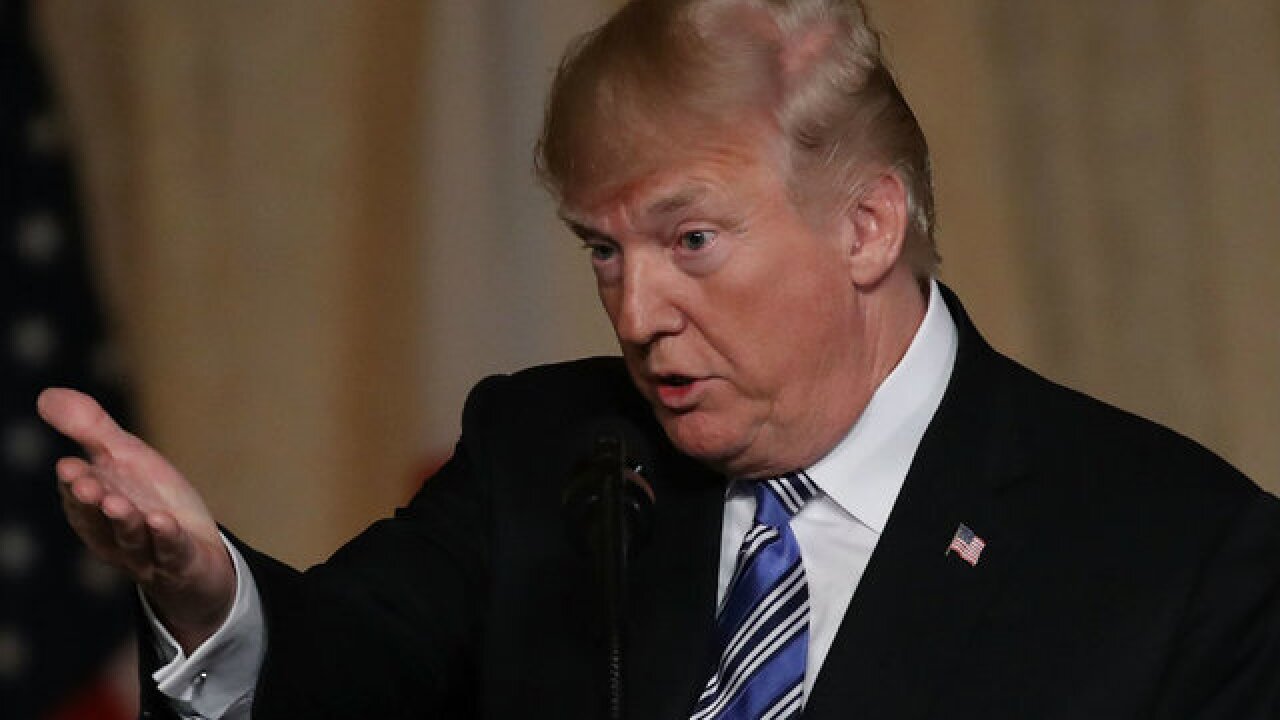 The president tweeted Thursday morning: “Thank you San Diego County for defending the rule of law and supporting our lawsuit against California's illegal and unconstitutional 'Sanctuary' policies. California's dangerous policies release violent criminals back into our communities, putting all Americans at risk.”

Thank you San Diego County for defending the rule of law and supporting our lawsuit against California's illegal and unconstitutional 'Sanctuary' policies. California's dangerous policies release violent criminals back into our communities, putting all Americans at risk.

On Tuesday, the San Diego County Board of Supervisors voted 3-1 in favor of supporting the Trump administration’s suit .

Among the laws targeted by the legal action is SB 54, which limits cooperation between local law enforcement and federal immigration authorities.

In recent weeks, Trump has been at odds with California Gov. Jerry Brown over the state’s immigration policies, sparring with him through the media and on Twitter.

He tweeted: "Governor Jerry Brown announced he will deploy 'up to 400 National Guard Troops' to do nothing. The crime rate in California is high enough, and the Federal Government will not be paying for Governor Brown’s charade. We need border security and action, not words!"

Governor Jerry Brown announced he will deploy “up to 400 National Guard Troops” to do nothing. The crime rate in California is high enough, and the Federal Government will not be paying for Governor Brown’s charade. We need border security and action, not words!

Several GOP members hesitant to back Trump in 2020
-- A wide array of House and Senate Republicans are not yet ready to endorse President Trump's bid for a second term, a reflection of the deep uncertainty on Capitol Hill over his political standing amid growing problems at home and abroad.

In interviews with a cross-section of more than two dozen GOP lawmakers, ranging from rank-and-file members, conservatives and party leaders, many refused to say they'd back Trump's re-election bid -- a surprise declaration given that members of Congress are typically quick to endorse sitting presidents of their own party without hesitation. Hardly any would offer a categorical endorsement of the president.

President threatens to cancel meeting with Kim Jong Un
-- President Trump said he will cancel his planned meeting with North Korean leader Kim Jong Un if he does not believe the summit will be productive.

Trump told reporters Wednesday he would not go if he felt the meeting would be “fruitful.”

“If when I’m there, I don’t think it’s fruitful, I will respectfully leave the meeting,” he said.

Trump is hoping to convince the North Korean leader to denuclearize and release American prisoners.

The president also confirmed that CIA Director Mike Pompeo met with Kim in secret over Easter weekend. Pompeo was reportedly in North Korea to lay the groundwork for the upcoming summit.

While the meeting is expected sometime in May, it remains unclear where the summit will take place.

Sources: Trump made decision to not impose more Russia sanctions
-- President Trump personally made the decision to abandon plans to impose more sanctions on Russia for supporting Syria's chemical weapons attack on civilians, according to three senior administration officials and a source familiar with the discussions.

The first senior administration source said the Trump administration informed the Russian government there won't be an additional round of sanctions. The official said the call was made to the Russian Embassy on Sunday. They said the confusion caused by comments made by UN Ambassador Nikki Haley in a Sunday show interview when she said new sanctions were coming made the call necessary.

The second administration official said a high-level person at the State Department called the embassy to say Haley's comments about sanctions were not correct. The source said the State Department official did not tell the Russians they were off the hook or that they would not face any sanctions, but conveyed that the issue was still under consideration.

Trump's national security team seemed to have reached enough of a consensus on punishing Russia for its de facto support for the attack that left at least 75 dead that Haley told CBS' "Face the Nation" on Sunday that Treasury Secretary Steven Mnuchin would be unveiling sanctions on Russia the next day.