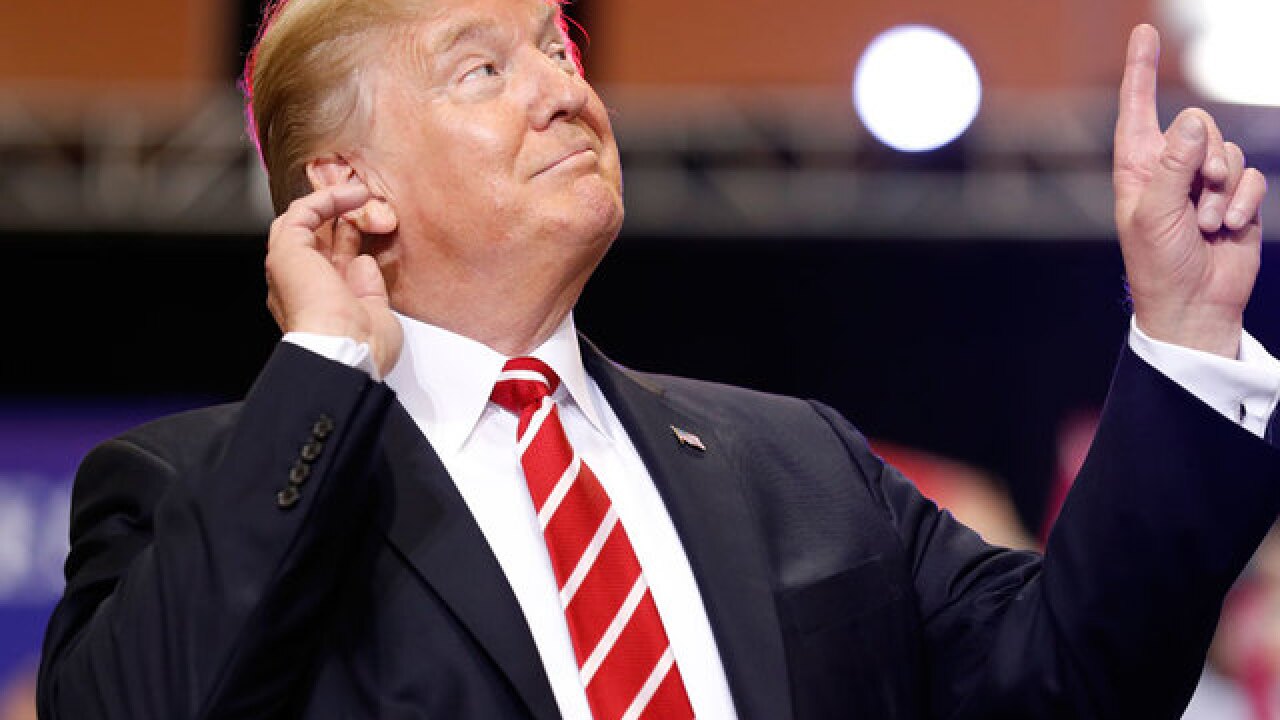 Copyright Associated Press
Alex Brandon
President Donald Trump reacts to the song as he arrives at a rally at the Phoenix Convention Center, Tuesday, Aug. 22, 2017, in Phoenix.

If Republican Senate doesn't get rid of the Filibuster Rule & go to a simple majority, which the Dems would do, they are just wasting time!

Trump blasts critics during Phoenix rally as protests turn unruly
-- President Trump fired back at his critics, particularly the media, in a speech before supporters in Phoenix Tuesday night.

While the president called for the country to unite in light of the recent events in Charlottesville, Virginia, Trump also took aim at the media and accused outlets of misrepresenting him and his statements.

He told the crowd: "I'm only doing this to show you how damned dishonest these people are."

Trump followed up on his thoughts on the "fake media" on Twitter Wednesday morning:

Last night in Phoenix I read the things from my statements on Charlottesville that the Fake News Media didn't cover fairly. People got it!

Trump addressed former Maricopa County sheriff Joe Arpaio, who was convicted earlier this summer of criminal contempt of court for failing to stop traffic patrols targeting immigrants after being ordered to do so by a federal judge.

Trump said of Arpaio who did not attend Tuesday's event: "So was Sheriff Joe convicted for doing his job? I'll make a prediction: I think he's going to be just fine."

The president also took the opportunity to criticize Arizona's Republican senators, without mentioning them by name.

A reference to the Senate being "one vote away" appeared to be a veiled shot at Sen. John McCain, who voted against the GOP's health care proposal.

The senator Trump called "weak on borders, weak on crime" was not named at the rally, but Trump called him out on Twitter Wednesday.

Phoenix crowd last night was amazing - a packed house. I love the Great State of Arizona. Not a fan of Jeff Flake, weak on crime & border!

Anti-Trump protesters had voiced their opinions around the Phoenix Convention Center throughout the day, but the protests took a turn for the worse when police fired pepper spray at the crowds after someone apparently threw rocks and bottles at officers.

Trump threatens government shutdown to build border wall
-- During Tuesday night's rally in Phoenix, the president told his supporters that he would be willing to shut down the government to build a ball along the U.S.-Mexico border.

"The obstructionist Democrats would like us not to do it, but believe me, if we have to close down our government, we're building that wall," Trump said.

Congress has until Oct. 1 -- the start of the fiscal year -- to pass a budget; if it doesn't, the government shuts down. So far, lawmakers haven't been able to reach a full agreement.

Part of that is because Democrats and some Republicans won't support a budget that puts money toward building the proposed border barrier. But the GOP needs those votes to keep the government open.

"Antifa," shorthand for "anti-fascist" or "anti-fascist action," is often a mix of far-left ideologies -- communists, socialists, anarchists, and so on -- with one unifying goal: to fight back against fascists and neo-Nazis "by any means necessary."

The petition argues that terrorism is "the use of violence and intimidation in pursuit of political aims" and blames the group for violence against police officers.

Now that the petition has the required number of signatures, the White House has 60 days to respond.