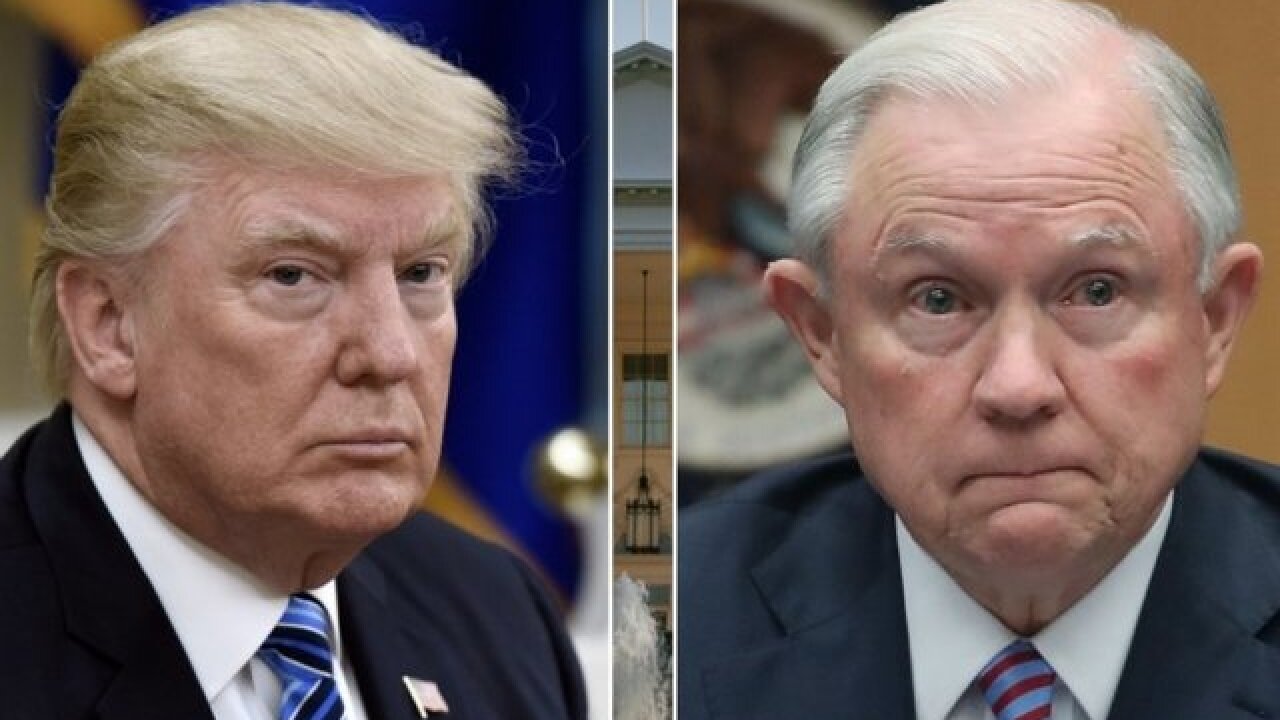 Trump continues swipes at AG Sessions
-- Less than an hour after Attorney General Jeff Sessions arrived at the White House routine meetings, President Trump -- while in the same building -- continued his blistering assault on Sessions.

Trump tweeted Wednesday morning: "Why didn't A.G. Sessions replace Acting FBI Director Andrew McCabe, a Comey friend who was in charge of Clinton investigation but got.... big dollars ($700,000) for his wife's political run from Hillary Clinton and her representatives. Drain the Swamp!"

Wednesday marks the third straight day the president has criticize Sessions via Twitter. On Monday, Trump referred to Sessions as "beleaguered" in a tweet over the ongoing Russia probe. The following day, Trump questioned Sessions for a "weak position on Hillary Clinton crimes" and for not opening an investigation into "Ukrainian efforts to sabotage Trump campaign."

In an interview with The New York Time last week, Trump expressed his disappointment with Sessions for recusing himself from the Russia probe.

Even with the numerous attacks, sources told CNN that Sessions has no plans to resign and is moving forward in his role.

Trump said: "After consultation with my Generals and military experts, please be advised that the United States Government will not accept or allow...... Transgender individuals to serve in any capacity in the U.S. Military. Our military must be focused on decisive and overwhelming..... victory and cannot be burdened with the tremendous medical costs and disruption that transgender in the military would entail. Thank you"

Trump's decision would revoke a policy approved by the U.S. Department of Defense under President Obama, which allowed transgender individuals to serve in the military.

House passes Russia sanctions bill
-- In a 419-3 vote, the House of Representatives passed a bill that includes new sanctions against Russia, Iran and North Korea.

The bill gives Congress the power to block any effort by the White House to weaken sanctions on Russia, offering a direct challenge to President Donald Trump's authority.

The legislation now moves on to the Senate, but it's unclear when the Senate will vote on the measure.

The House action came hours after Jared Kushner, the President's son-in-law and senior adviser, wrapped up an interview with the House intelligence committee about the 2016 campaign and allegations that the Trump campaign coordinated with Russian officials to help defeat Hillary Clinton. On Monday he met with staff on the Senate intelligence panel and said afterward that he didn't collude with Russia and didn't know anyone from the campaign who did.

Teigen posted on Twitter on Tuesday that she has been blocked by the president, claiming she was blocked after tweeting to the Trump: "Lolllllll no one likes you."

Teigen has been an outspoken critic of Trump's for several years.