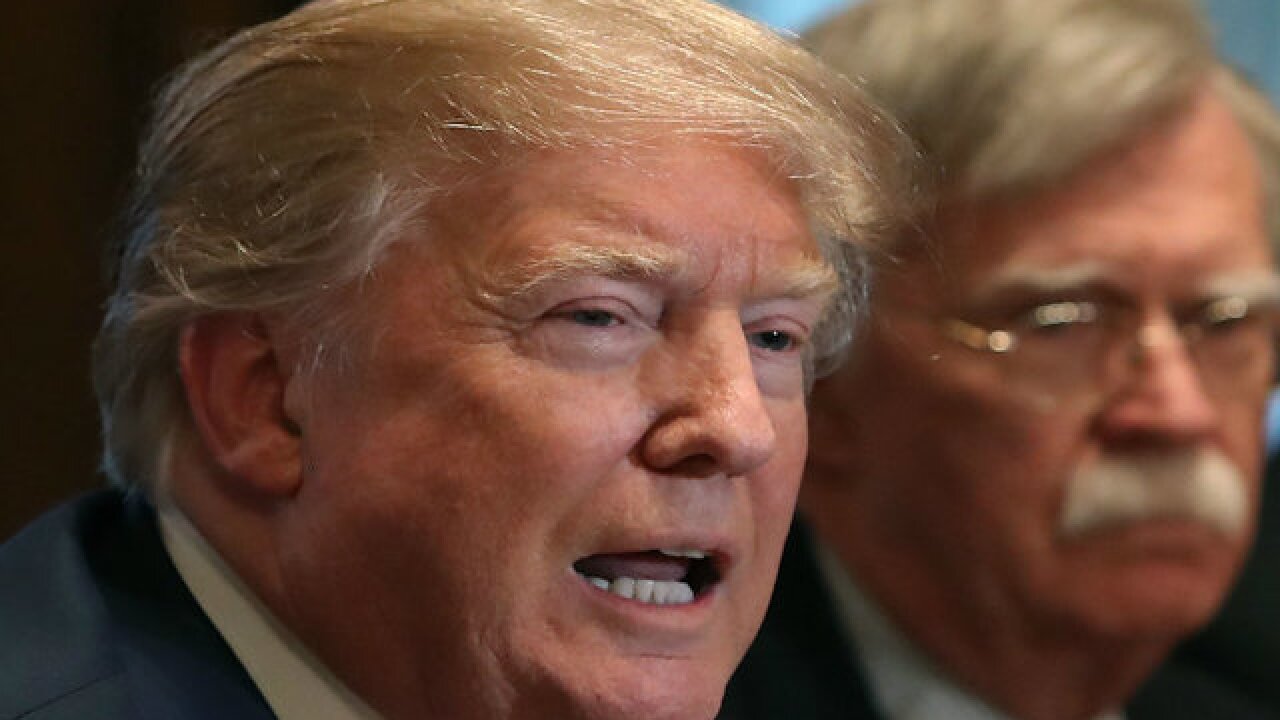 Copyright Getty Images
Mark Wilson
President Donald Trump is flanked by National Security Advisor John Bolton as he speaks about the FBI raid at his lawyer Michael Cohen's office, while receiving a briefing from senior military leaders regarding Syria, in the Cabinet Room, on April 9, 2018 in Washington, DC. The FBI raided the office of Michael Cohen on Monday as part of the ongoing investigation into the president's administration.

Report: Documents regarding payments to women were sought in Cohen raid
-- During a raid of President Trump’s personal attorney’s office Monday, FBI agents searched for records and documents pertaining to payments made to two women who claim they had affairs with Trump, according to a New York Times report.

The Times, citing several people with knowledge of the investigation, also reported agents were looking for “information related to the publisher of The National Enquirer’s role in silencing one of the women.”

According to the Times, the search warrant served on Michael Cohen’s office in New York sought information about former Playboy model Karen McDougal and the reported $150,000 she was paid by American Media Inc., the parent company of The National Enquirer.

McDougal has publicly claimed she had a lengthy affair with Trump 12 years ago.

Additionally, agents searched Cohen’s office for information on adult film star Stormy Daniels, who claims she had a brief affair with Trump. Daniels, whose real name is Stephanie Clifford, was paid $130,000 by Cohen days before the 2016 election to keep her quiet about her relationship with Trump.

"President Trump thanks him for his patriotic service and wishes him well,” Sanders said, according to ABC News.

Bossert is the latest member of the Trump White House to leave his post. Bossert follows in the footsteps of Secretary of State Rex Tillerson, national security advisers H.R. McMaster and Michael Flynn, economic adviser Gary Cohn, communications directors Hope Hicks, Anthony Scaramucci and Mike Dubke, senior adviser Steve Bannon, Health and Human Services Director Tom Price and many others who have resigned their post or been fired.

Trump cancels South America trip, plans to monitor Syria developments
-- White House officials said President Trump will not be going on a planned trip to South America at the end of the week; instead, he will remain in Washington, D.C., to stay on top of the situation in Syria.

"President Trump will not attend the 8th Summit of the Americas in Lima, Peru or travel to Bogota, Colombia, as originally scheduled. At the President's request, the vice president will travel in his stead. The President will remain in the United States to oversee the American response to Syria and to monitor developments around the world,” press secretary Sarah Sanders said in a statement.

Trump has been mulling a response to the weekend attack with military leaders and foreign counterparts. He has signaled a decision would come within days.

The trip was set to have been Trump's first visit to South America as President. He was expected to meet fierce resistance to his hardline immigration stances from the assembled leaders.

On Tuesday, the president tweeted:

However, attorney-client privilege, which Trump suggested was violated by the raid, does not apply if the attorney-client communication was made in the furtherance of a crime.

Cohen, alongside Trump, is ensnared in a legal battle over the sourcing of a $130,000 "hush agreement" payment to Daniels less than two weeks before the 2016 presidential election. Any involvement by Trump could suggest the payment was an in-kind campaign contribution which was not disclosed to the Federal Election Commission, which would be a violation of federal law, according to Paul S. Ryan, a campaign finance attorney who works for Common Cause. The FBI seizure included bank records, a source said.

On Monday, Trump also called the raid a "disgraceful situation" and "an attack on our country." Asked if he would fire Mueller, he said: "We'll see what happens." While that could have the effect of putting a screeching halt to the investigation, some members of Congress, including Republicans, have said that Mueller's termination could lead to impeachment proceedings.