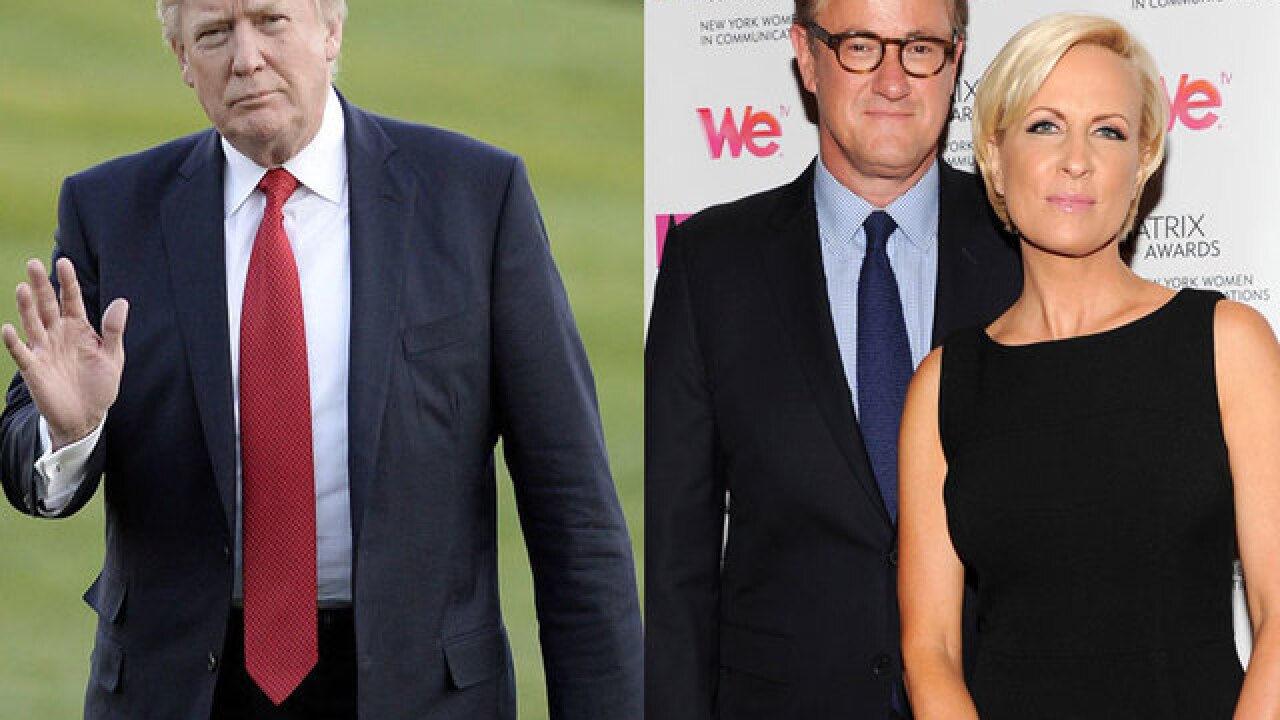 On Friday morning's show, Scarborough said Trump had a "disturbing obsession with Mika." Brzezinski added that the president's behavior was "frightening and really sad for our country."

Trump took to Twitter Thursday to slam the pair in what some across the country have called a case of cyberbullying. Trump notably criticized Brzezinki's "low I.Q." and took a shot at her appearance with a "face-lift" comment.

After Brzezinski and Scarborough's comments, the president once again went on Twitter Friday to dismiss the pair as "FAKE NEWS."

Watched low rated @Morning_Joe for first time in long time. FAKE NEWS. He called me to stop a National Enquirer article. I said no! Bad show

In response to Trump's National Enquirer reference, Scarborough said on "Morning Joe": "We got a call that, 'Hey, the National Enquirer is going to run a negative story against you guys...' And they said, 'If you call the president up, and you apologize for your coverage, then he will pick up the phone and basically spike this story … "The calls kept coming and kept coming, and they were like 'Call. You need to call. Please call. Come on, Joe. Just pick up the phone and call him.'"

If Republican Senators are unable to pass what they are working on now, they should immediately REPEAL, and then REPLACE at a later date!

Trump's declaration came shortly after Sen. Ben Sasse, R-Nebraska, urged the president in a letter to repeal Obamacare now and replace later. The current Republican plan in Congress is to do both in one massive piece of legislation, though the Senate's bill has struggled to gain necessary GOP support.

"On July 10, if we don't have agreement on a combined repeal and replace plan, we should immediately vote again on H.R. 3762, the December 2015 ObamaCare repeal legislation that the Congress passed but President Obama vetoed," Sasse wrote in the letter. "We should include a year-long implementation delay to give comfort to Americans currently on ObamaCare that a replacement plan will be enacted before expiration."

Prostitutes come out against GOP Senate health care bill
-- A group of license prostitutes who work in legal brothels in Nevada say Senate Republicans' health care plan threatens their jobs and their families.

Under Obamacare the Hookers for Health Care group said: "Thousands of prostitutes nationwide were, for the first time, able to obtain affordable health care insurance for themselves and their families.

The group plans to go "on a political offensive ... lobbying politicians, protesting in the streets, and waging battle on social media to stop the Republican effort."