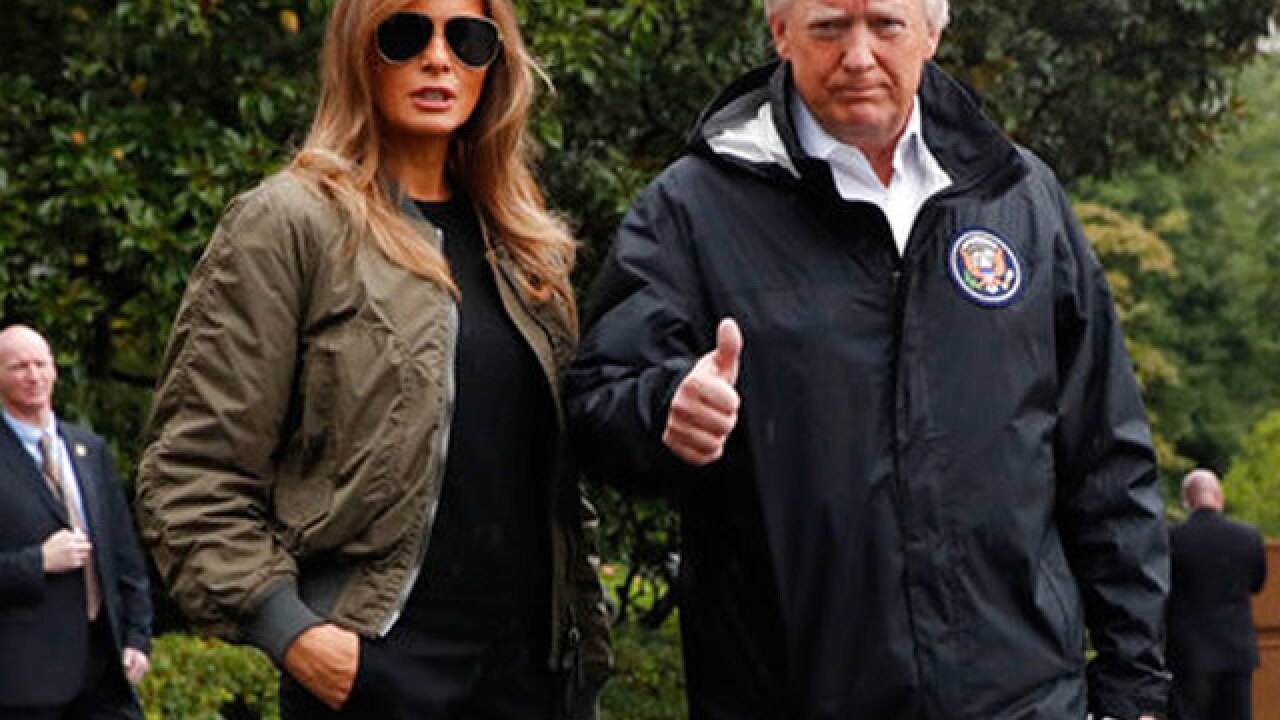 Copyright Associated Press
Jacquelyn Martin
President Donald Trump, accompanied by first lady Melania Trump, gives a thumbs-up as they walk to Marine One on the South Lawn of the White House in Washington, Tuesday, Aug. 29, 2017, for a short trip to Andrews Air Force Base, Md., then onto Texas to survey the response to Hurricane Harvey. The hurricane is the first major disaster of Trump's presidency.

Trump heads to Texas to view Harvey devastation
-- President Trump left Washington, D.C., early Tuesday morning for a trip to southern Texas, where he is expected to survey the damage caused by Hurricane Harvey and get an up-close look at the ongoing relief and rescue efforts.

Eager to demonstrate leadership amid the worst natural disaster of his tenure, Trump travels to the flood-ravaged region, even as the state grips for more catastrophic rain.

Trump hopes his stops will send the message that he's fully engaged in the disaster recovery efforts, which have consumed Texas officials and are expected to persist for months.

The president's schedule, according to the White House (times are Eastern):

. @foxandfriends We are not looking to fill all of those positions. Don't need many of them - reduce size of government. @IngrahamAngle

President reacts to North Korea's missile launch
-- After North Korea fired a missile over Japan early Tuesday morning, President Trump said "all options are on the table" in regards to the country.

The missile was fired just before 6 a.m. in Japan, where the launch set off warnings in the northern part of the country urging people to seek shelter.

"The world has received North Korea's latest message loud and clear," Trump said in a statement. "This regime has signaled its contempt for its neighbors, for all members of the United Nations, and for minimum standards of acceptable international behavior."

The unidentified missile flew over Erimomisaki, on the northern island of Hokkaido, and broke into three pieces before falling into the Pacific Ocean, about 1,180 kilometers (733 miles) off the Japanese coast.

Trump cited one of President Clinton's last acts in office: the controversial pardon of wealthy financier Marc Rich. He spent years abroad evading arrest after he was accused of tax evasion and ignoring sanctions.

Trump told reporters: "If you look at, as an example, President Clinton pardoned Marc Rich, who was charged with crimes going back decades."

Rich's ex-wife Denise happened to donate millions to Democratic causes around the same time, which raised suspicions that money bought Rich's pardon. Both Clinton and Denise Rich deny those claims.

Trump said of Arpaio: "He's very strong on borders, very strong on illegal immigration. He is loved in Arizona. I thought he was treated unbelievably unfairly when they came down with their big decision to go get him."

While requiring all green card applicants to be interviewed is already provided for in the law, U.S. Citizenship and Immigration Services (USCIS) in the past has waived the interview for broad categories of applicants, a move designed to marshal resources for higher-risk cases.

The new directive stems from Trump's executive order known as the travel ban, which put restrictions on who could enter the U.S., titled "Protecting the Nation From Foreign Terrorist Entry Into the United States," according to USCIS. It is also designed to combat fraud, the agency said.