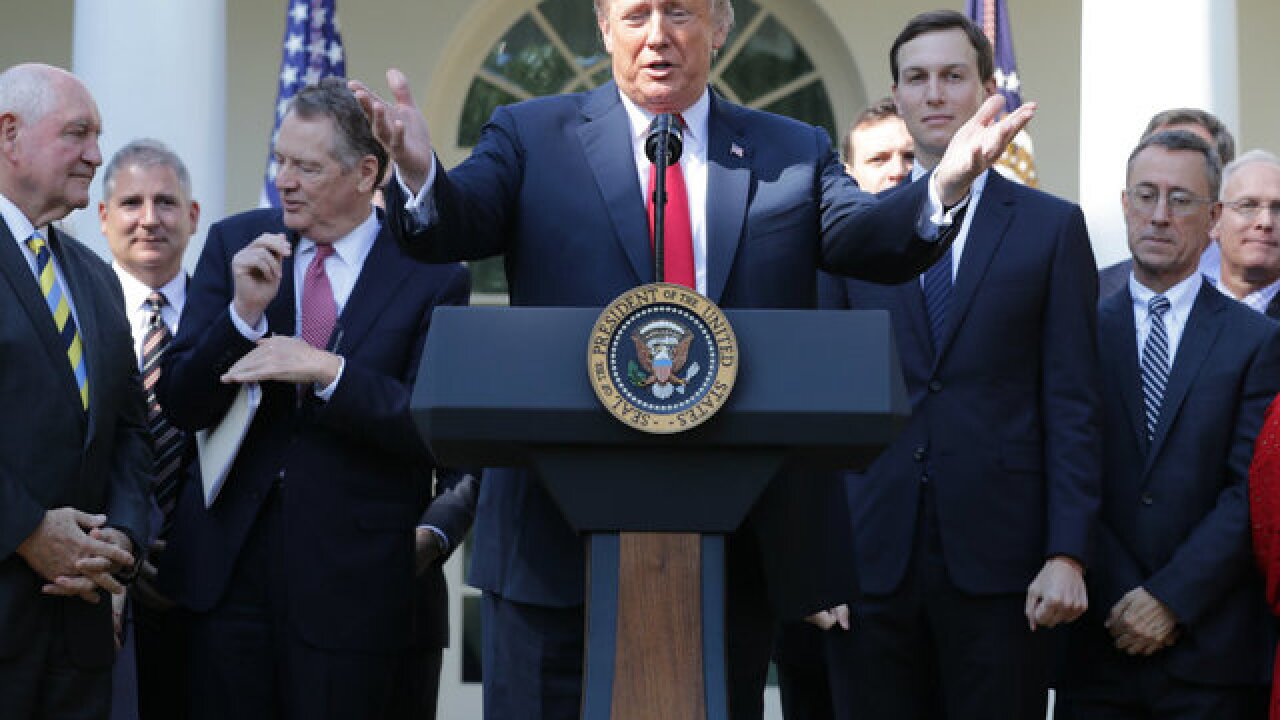 Copyright Getty Images
Chip Somodevilla
President Donald Trump speaks during a press conference to discuss a revised U.S. trade agreement with Mexico and Canada in the Rose Garden of the White House on October 1, 2018 in Washington, DC.

U.S. and Canada reach deal on NAFTA after talks go down to the wire
-- Canada agreed late Sunday to sign on to a trade deal between the United States and Mexico, revamping the three-country North American Free Trade Agreement after more than a year of tortuous negotiations.

Just hours before a midnight deadline, the U.S. and Canadian governments agreed to a deal that would allow U.S. farmers greater access to Canada's dairy market and address concerns about potential U.S. auto tariffs, officials from both countries said.

The agreement with Canada and Mexico -- two of the United States' biggest trading partners -- fulfills President Trump's campaign pledge to renegotiate NAFTA and avoids his threat to exclude Canada if the talks failed.

The new deal has a new name: the United States-Mexico-Canada Agreement.

President Trump tweeted Monday: "Late last night, our deadline, we reached a wonderful new Trade Deal with Canada, to be added into the deal already reached with Mexico. The new name will be The United States Mexico Canada Agreement, or USMCA. It is a great deal for all three countries, solves the many deficiencies and mistakes in NAFTA, greatly opens markets to our Farmers and Manufacturers, reduces Trade Barriers to the U.S. and will bring all three Great Nations together in competition with the rest of the world. The USMCA is a historic transaction!"

He later added: "Congratulations to Mexico and Canada!"

FBI interviews Kavanaugh accuser Deborah Ramirez as part of its narrow scope
-- The FBI investigation into allegations against Supreme Court nominee Brett Kavanaugh is narrowly focused, top officials said in interviews on Sunday, with sources telling CNN that the White House is controlling the scope of the probe.

The investigation is the result of a dramatic day in Washington on Friday that began with quick movement toward Kavanaugh's confirmation and ended with a pause in the process while the FBI steps in. Following the agreement for the FBI to investigate Kavanaugh, the focus has moved to how the probe will be handled, its ultimate findings, and whether it will put to rest fears about a lack of due diligence over the nominee for the nation's highest court.

A source with knowledge of the investigation told CNN that the FBI would take its direction from the White House, not the Senate, and that the agency would interview a handful of people.

One of those people interviewed included Deborah Ramirez, whom the FBI interviewed Sunday, a source told CNN on Sunday afternoon. Ramirez came forward last week with allegations Kavanaugh exposed himself to her at a party while both were students at Yale, a claim which Kavanaugh immediately denied.

Yale classmate says Kavanaugh has 'not told the truth' about his drinking
-- A Yale classmate of Supreme Court nominee Brett Kavanaugh accused him on Sunday of being untruthful in his testimony to the Senate Judiciary Committee and making a "blatant mischaracterization" of his drinking while in college.

"I can unequivocally say that in denying the possibility that he ever blacked out from drinking, and in downplaying the degree and frequency of his drinking, Brett has not told the truth," Chad Ludington said in a statement to CNN.

In his testimony to the judiciary committee Thursday, Kavanaugh denied ever blacking out from drinking.

Ludington said in his statement he witnessed Kavanaugh throw a beer in a man's face once for making a semi-hostile remark, "starting a fight that ended with one of our mutual friends in jail."

"It is truth that is at stake," Ludington said in a statement. "and I believe that the ability to speak the truth, even when it does not reflect well upon oneself, is a paramount quality we seek in our nation's most powerful judges."