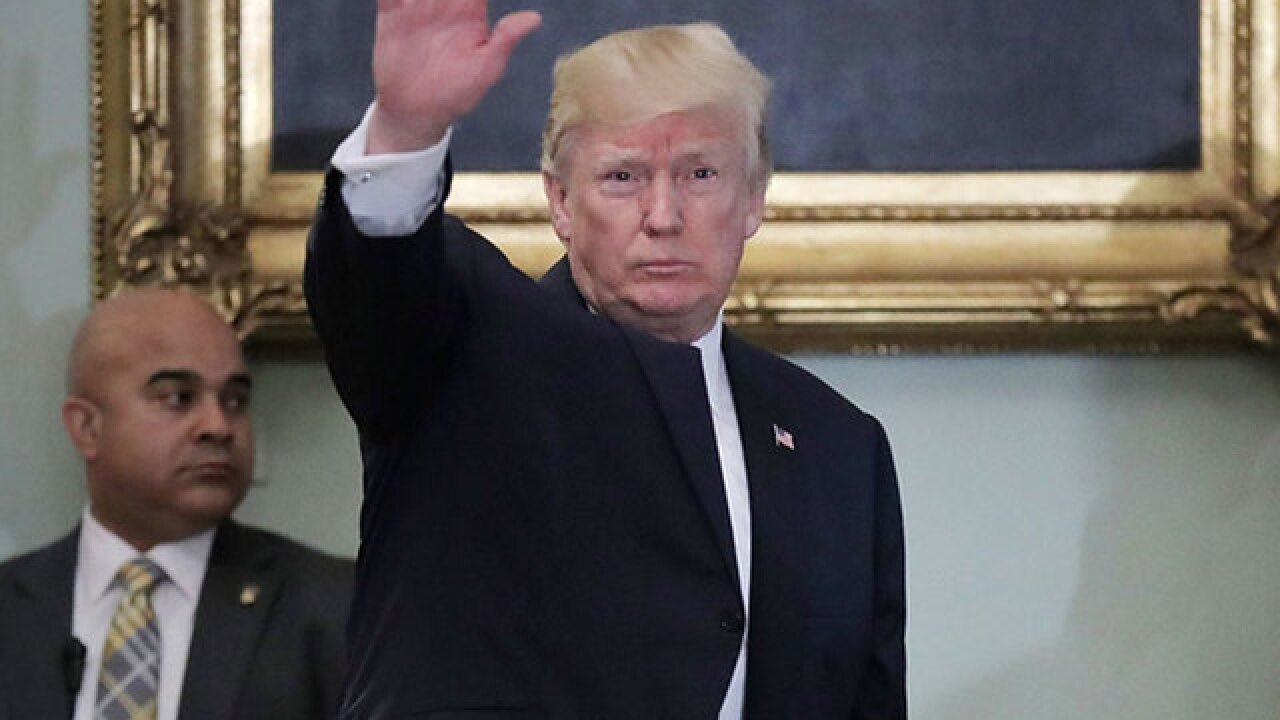 Trump faces backlash over retweets of anti-Muslim videos
-- President Trump is being criticized for retweeting videos that show anti-Muslim content.

On Wednesday morning, Trump retweeted three videos posted by Jayda Fransen, the deputy leader of Britain First, a far-right and ultra-nationalist political group. The videos depict purported Muslims assaulting people and, in one video, smashing a statue of the Virgin Mary.

Trump, who has previously warned that immigration from Muslim-majority nations threatens European and U.S. security, frequently retweets other messages whose political views he finds favorable, but seldom shares messages as offensive and explosive as he did on Wednesday.

Fransen touted that the videos had been shared with Trump's nearly 44 million followers. "GOD BLESS YOU TRUMP!" she wrote in all caps.

Council on American Islamic Relations National Executive Director Nihad Awad issued a statement in response to Trump's retweets: "By his unconscionable and irresponsible actions this morning, President Trump is clearly telling members of his base that they should hate Islam and Muslims. These are actions one would expect to see on virulent anti-Muslim hate sites, not on the Twitter feed of the president of the United States. Trump's posts amount to incitement to violence against American Muslims. His actions should be condemned by all American political and religious leaders, regardless of their party or faith."

Trump blasts NBC while reacting to Lauer firing
-- After it was announced that "Today" show host Matt Lauer was terminated by NBC over sexual misconduct allegations, President Trump reacted to the firing with a jab at Lauer's now-former company.

Trump tweeted Wednesday: "Wow, Matt Lauer was just fired from NBC for 'inappropriate sexual behavior in the workplace.' But when will the top executives at NBC & Comcast be fired for putting out so much Fake News. Check out Andy Lack's past!"

The president then followed up with: "So now that Matt Lauer is gone when will the Fake News practitioners at NBC be terminating the contract of Phil Griffin? And will they terminate low ratings Joe Scarborough based on the 'unsolved mystery' that took place in Florida years ago Investigate!" Scarborough responded on Twitter:

Looks like I picked a good day to stop responding to Trump's bizarre tweets. He is not well. https://t.co/XJhW5ZHNfs

Just spoke to President XI JINPING of China concerning the provocative actions of North Korea. Additional major sanctions will be imposed on North Korea today. This situation will be handled!

Economy growing! Excluding hurricane effects, CEA estimates that real GDP growth would have been 3.9% in Q3.

Stock market at a new high, unemployment at a low. We are winning and TAX CUTS will shift our economy into high gear! pic.twitter.com/HrKIF72VqE

Looks like another great day for the Stock Market. Consumer Confidence is at Record High. I guess somebody likes me (my policies)!

Great, and we should boycott Fake News CNN. Dealing with them is a total waste of time! https://t.co/8zJ3j7g5el

One sitting U.S. senator quoted by the Times, "who listened as the President revived his doubts" about the issue, "chuckled" when speaking about what was said. Trump "has had a hard time letting go of his claim that Mr. Obama was not born in the United States," the senator, who "asked not to be named to discuss private conversations," told The New York Times.

Although Obama was born in Hawaii in 1961, Trump publicly questioned Obama's citizenship for several years before saying in a news conference during the 2016 election that he believed the nation's first African-American president was born in the U.S.

In September 2016, Trump said, "President Barack Obama was born in the United States."