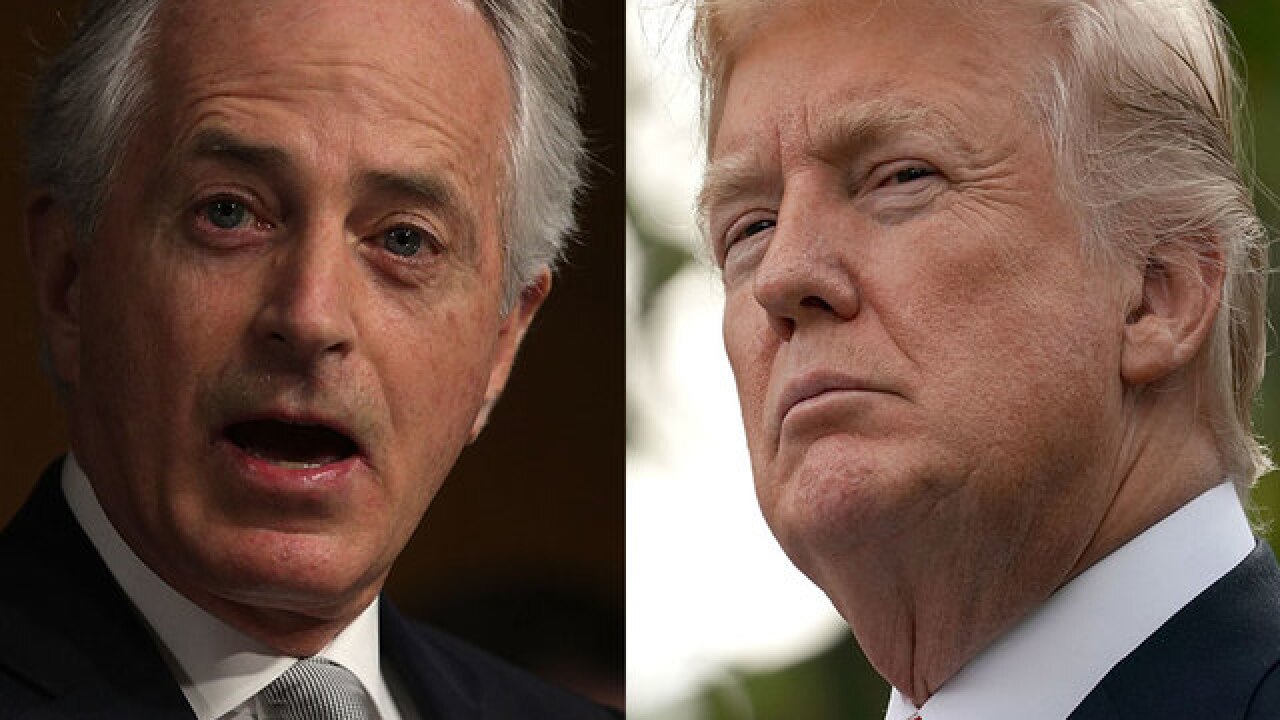 Trump meeting with Senate Republicans to discuss tax reform
-- President Trump is scheduled to meet with Republican senators on Capitol Hill Tuesday to talk about his tax reform plan.

The lunch meeting will include several lawmakers who have publicly opposed Trump, including Sens. John McCain and Bob Corker.

Trump-Corker feud escalates ahead of scheduled meeting
-- The war of words between President Trump and Sen. Bob Corker continued Tuesday morning, hours before the men were to meet at a lunch on Capitol Hill.

The president slammed the Tennessee Republican in a series of tweets after Corker criticized Trump's involvement in Capitol Hill tax negotiations.

...Corker dropped out of the race in Tennesse when I refused to endorse him, and now is only negative on anything Trump. Look at his record!

However, Trump came back to rip Corker:

Isn't it sad that lightweight Senator Bob Corker, who couldn't get re-elected in the Great State of Tennessee, will now fight Tax Cuts plus!

Corker made the TV news rounds Tuesday morning. On NBC, Corker called Trump's effort to court senators over the White House's tax reform proposal "a photo-op." And speaking to ABC, he suggested that the president butt out of the process.

"(I)f you start taking things off the table before you get started you make that very difficult. So what I hope is going to happen is the President will leave this effort, if you will, to the tax writing committees and let them do their work and not begin taking things off the table that ought to be debated in the committees at the proper time," he said on "Good Morning America."

Sen. Corker is the incompetent head of the Foreign Relations Committee, & look how poorly the U.S. has done. He doesn't have a clue as.....

...the entire World WAS laughing and taking advantage of us. People like liddle' Bob Corker have set the U.S. way back. Now we move forward!

Cohen's planned meeting comes after the Senate Select Committee on Intelligence delayed a highly anticipated public appearance Wednesday -- a session many believe was an attempt by the Senate panel to punish the Trump attorney after his originally scheduled testimony was abruptly canceled. His public session is still expected to happen at a later date.

Cohen now will meet in private with members of the House Permanent Select Committee on Intelligence Tuesday, before a classified session with Senate intelligence committee staff investigators Wednesday, sources told CNN. The sessions amount to his first extended appearances behind closed doors on Capitol Hill and make him the latest Trump associate to face a grilling from congressional investigators.