DC Daily: Trump continues to back Pence over NFL walkout 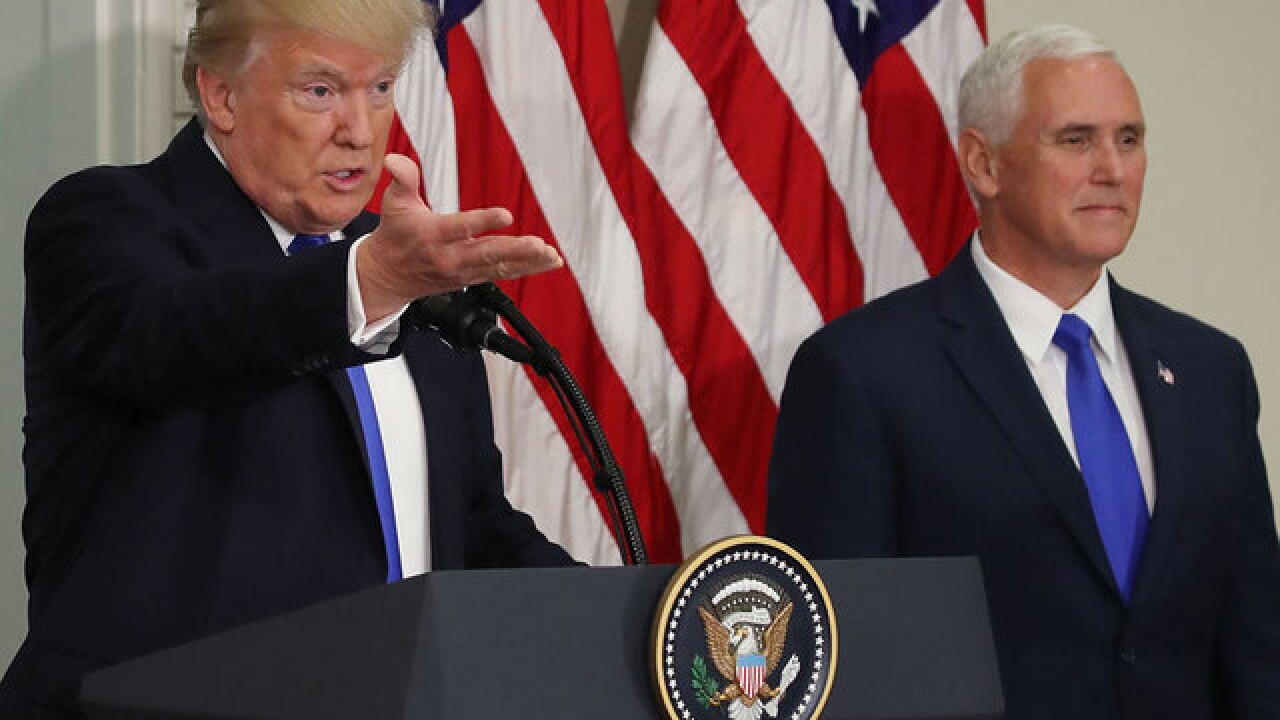 Pence was at the game to attend the former quarterback Peyton Manning's jersey retirement ceremony but left at around the start of the game -- after the National Anthem in which several players knelt.

Shortly after leaving, Pence explained on Twitter: "I left today's Colts game because @POTUS and I will not dignify any event that disrespects our soldiers, our Flag, or our National Anthem."

He added: "At a time when so many Americans are inspiring our nation with their courage, resolve and resilience, now more than ever, we should rally around our flag and everything that unites us."

Later in the day, Trump said he asked Pence to leave the game "if any players kneeled, disrespecting our country."

49ers player Eric Reid, who kneels during the National Anthem, said of Pence: "He knew that we were probably going to do it again. This is what systemic oppression looks like. A man with power comes to the game, tweets a couple of things out and leaves the game with an attempt to thwart our efforts."

The president took to Twitter Monday morning with an apparent response to critics who believed Pence's appearance at the game and subsequent walkout was a publicity stunt.

Trump said: "The trip by @VP Pence was long planned. He is receiving great praise for leaving game after the players showed such disrespect for country!"

How much did Pence's trip cost?
-- If Vice President Pence's trip to Indianapolis for the Colts game was to make a point, it likely cost taxpayers hundreds of thousands of dollars.

According to CNN, the cost just to fly Pence and his staff from Las Vegas to Indianapolis, and then from there to Los Angeles, cost $242,500.

Trump's morning tweet(s):
-- The president had this to say Monday morning about the U.S.'s policy on North Korea:

Our country has been unsuccessfully dealing with North Korea for 25 years, giving billions of dollars & getting nothing. Policy didn't work!

Lawyer: 2016 Trump Tower meeting not about Clinton
-- An attorney for the Russian billionaire who allegedly pushed for the June 2016 meeting between senior members of Trump's team and a Russian lawyer says he has documents showing the meeting wasn't really about dirt on Hillary Clinton.

An email exchange and talking points provided to CNN are the latest indication of how some of the meeting participants plan to make their case about why the meeting with Donald Trump Jr. did not amount to collusion between Russian officials and the Trump campaign.

The new information stands in contrast with the initial email pitching the meeting to Trump Jr.

The June 2016 meeting with Trump Jr., Donald Trump's son-in-law Jared Kushner and then-Trump campaign chairman Paul Manafort has attracted intense interest because Trump Jr. was told he would get damaging information on Clinton amid allegations of possible collusion between the Trump campaign and Russian officials.

Trump is a president who is acting "like he's doing 'The Apprentice' or something," the Tennessee Republican said in an interview with The New York Times that was published Sunday night.

"He concerns me," Corker added. "He would have to concern anyone who cares about our nation."

The newspaper did not expand on the "World War III" comments beyond mentioning the quote in the first paragraph of the story.

Trump and Corker, who is not running for re-election in 2018, launched into a Twitter spat Sunday morning in a major public falling out, making the Tennessean the latest senior Republican lawmaker to openly criticize Trump over his statements online and off.

At one point in his series of tweets attacking Corker, Trump said he rejected the senator's request for an endorsement -- a claim denied by Corker's chief of staff, Todd Womack, later in the day.

"I don't know why the President tweets out things that are not true," Corker said. "You know he does it, everyone knows he does it, but he does."