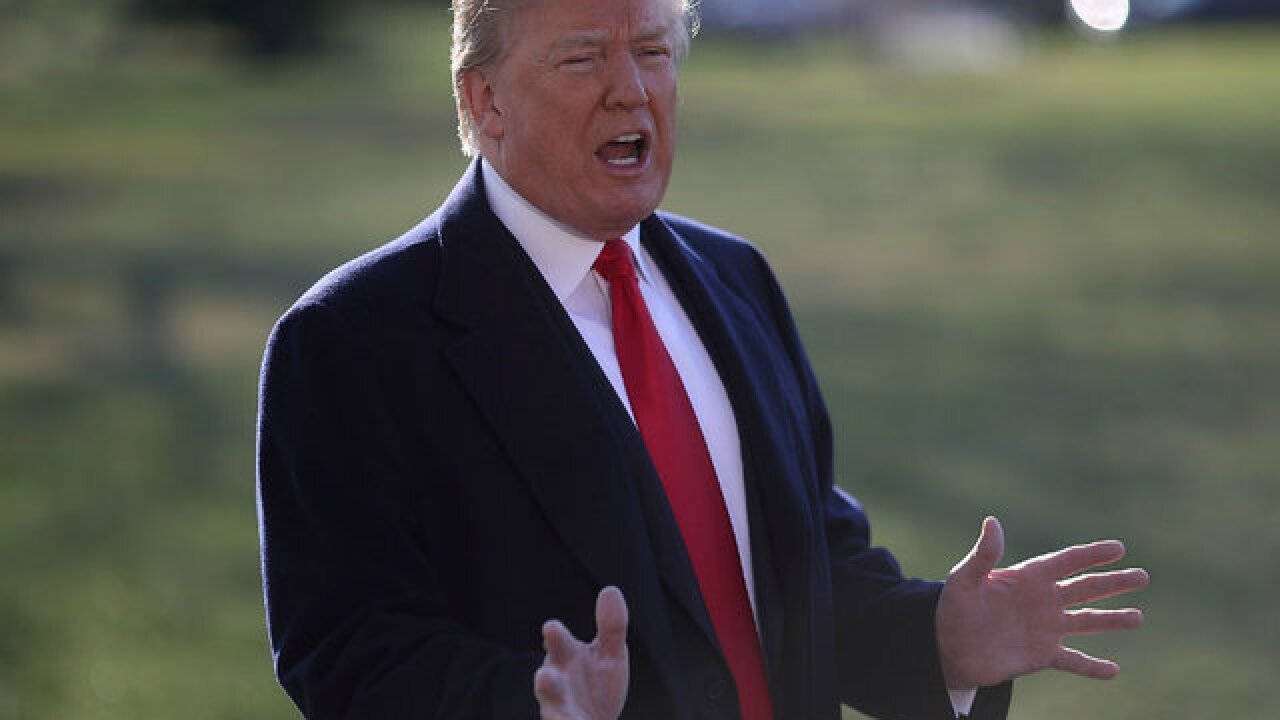 Copyright Getty Images
Mark Wilson
President Donald Trump answers questions from the media after the firing of Secretary of State Rex Tillerson before departing from the White House on March 13, 2018 in Washington, DC. President Trump is traveling to California to view prototypes of a proposed border wall.

Trump believes Mueller could pit the president’s statements against others who have testified in the ongoing Russia collusion investigation.

“So if I say something and he (Comey) says something, and it’s my word against his, and he’s best friends with Mueller, so Mueller might say: ‘Well, I believe Comey,’ and even if I’m telling the truth, that makes me a liar. That’s no good.”

Later in the interview, Trump said he had the power to run the investigation if he wanted to.

“I can go in, and I could do whatever -- I could run it if I want. But I decided to stay out,” he said. “I’m totally allowed to be involved if I wanted to be. So far, I haven’t chosen to be involved. I’ll stay out.”

Trump did not say whether he would agree to meet with Mueller for an interview.

Trump’s statements in the interview come on the heels of reports that a top White House lawyer has become a key witness in Mueller’s probe.

The meetings only add complications to the already-fraught relationship between the President and the White House's top lawyer. And as nervous aides await a verdict in former Trump campaign chairman Paul Manafort's trial and watch with trepidation the inauspicious public relations blitz carried by lead attorney Rudy Giuliani, uncertainty surrounding the President's handling of the Russia investigation abounds.

Trump was spending another weekend at his New Jersey golf club when The New York Times first reported McGahn's cooperation with Mueller's office, which is investigating Russian attempts to interfere in the 2016 election.

Trump’s morning tweets:
-- The president touched on several topics on his Twitter feed on Tuesday morning:

Even James Clapper has admonished John Brennan for having gone totally off the rails. Maybe Clapper is being nice to me so he doesn’t lose his Security Clearance for lying to Congress!

Fake News, of which there is soooo much (this time the very tired New Yorker) falsely reported that I was going to take the extraordinary step of denying Intelligence Briefings to President Obama. Never discussed or thought of!

I am sorry to have to reiterate that there are serious and unpleasant consequences to crossing the Border into the United States ILLEGALLY! If there were no serious consequences, our country would be overrun with people trying to get in, and our system could not handle it!

In a tweet, Trump said: “Bill DeBlasio, the high taxing Mayor of NYC, just stole my campaign slogan: PROMISES MADE PROMISES KEPT! That’s not at all nice. No imagination!”

The mayor responded with his own tweet: “The difference is that I’m not lying when I say it.”

The difference is that I’m not lying when I say it. https://t.co/dyoi1MdPAm

Trump ripped de Blasio after the New York City mayor appeared at an event with a sign that read “Promises Made, Promises Kept.”

East New York was too often left behind, but now it will have a state of the art school for 1,000 students #inBrooklyn. The goal of neighborhood plans like this one is to use the tools of government to put the people's interests first. pic.twitter.com/Ox24NMvQTC

Similar signs have appeared at Trump rallies in the past.

"This will be my first time traveling to Africa and I am excited to educate myself on the issues facing children throughout the continent, while also learning about its rich culture and history," the first lady said in a statement. "We are a global society and I believe it is through open dialogue and the exchanging of ideas that we have a real opportunity to learn from one another."

The Associated Press was first to report her travel plans.

In January, CNN reported that President Donald Trump, at a closed-door meeting at the White House, bemoaned the influx of immigrants from what he deemed "s---hole countries" in Africa, according to sources.