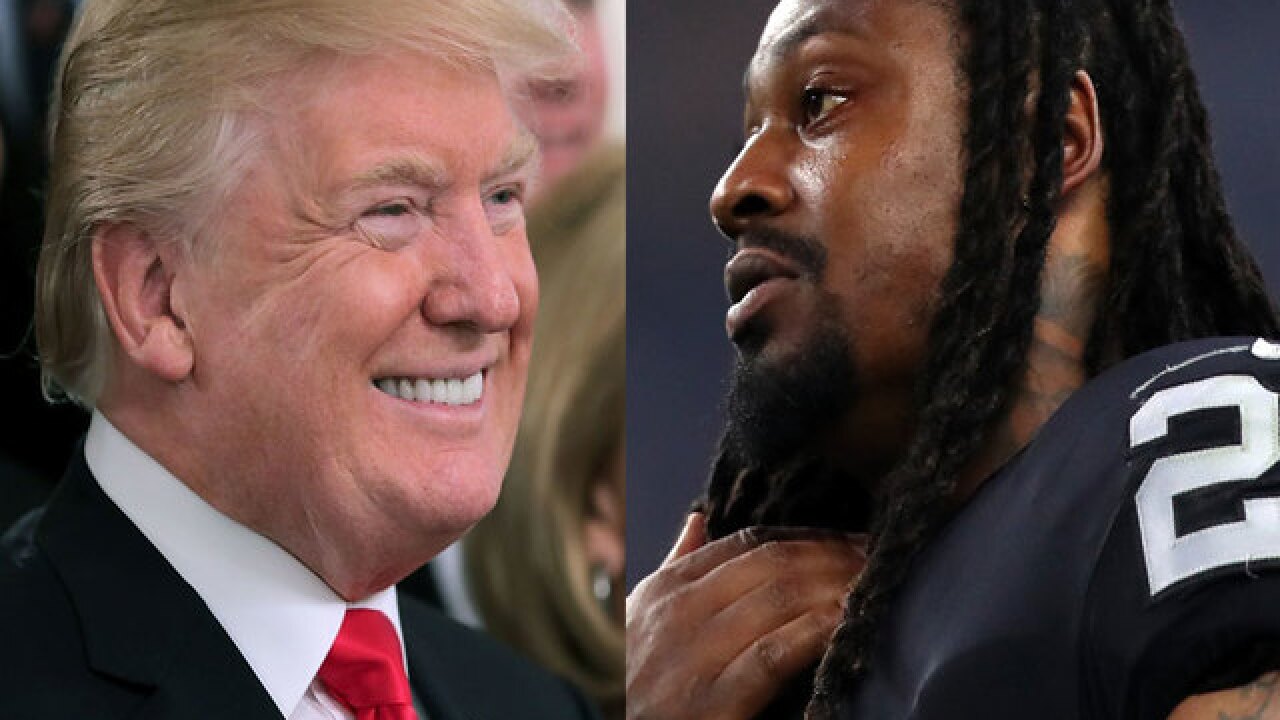 Trump calls for Marshawn Lynch suspension for sitting during anthem
-- President Trump wants the NFL to suspend Raiders running back Marshawn Lynch after he sat down during the American national anthem prior to a game against the Patriots on Sunday in Mexico City.

Lynch was photographed standing as the Mexican national anthem was played at Estadio Azteca, but he was seen sitting when "The Star Spangled Banner" was played.

Marshawn Lynch sits during the US national anthem, stands for Mexican anyhem pic.twitter.com/8wdaKprEki

On Monday morning, Trump tweeted: "Marshawn Lynch of the NFL's Oakland Raiders stands for the Mexican Anthem and sits down to boos for our National Anthem. Great disrespect! Next time NFL should suspend him for remainder of season. Attendance and ratings way down."

The president and the NFL have butted heads over athletes' decisions to kneel during the national anthem at games, with Trump calling on the league to fire players who protest during the anthem earlier this year.

Trump after agent's death: "We will, and must, build the Wall"
-- The president offered his thoughts on the death of a Border Patrol agent who was patrolling near the U.S.-Mexico border in southwest Texas.

Rogelio Martinez, 36, died after he and his partner responded to an undisclosed incident in the Big Bend Sector near Interstate 10 over the weekend. Both agents were injured, but Martinez succumbed to his injuries Sunday morning.

In a statement Sunday, Texas Gov. Greg Abbott characterized the incident as an attack, but federal border officials have only said the agents were investigating "activity" when they were injured and have not elaborated further as of Monday.

Trump, in reaction to the agent's death, tweeted Sunday: "We will seek out and bring to justice those responsible. We will, and must, build the Wall."

Border officials confirmed the FBI is investigating the incident.

While speaking to Mesa Mayor John Giles, Flake was heard on an open mic saying if the GOP becomes "the party of Roy Moore and Donald Trump, we are toast."

After word of the statement reached Trump, the president tweeted: "Sen. Jeff Flake(y), who is unelectable in the Great State of Arizona (quit race, anemic polls) was caught (purposely) on 'mike' saying bad things about your favorite President. He’ll be a NO on tax cuts because his political career anyway is 'toast.'"

Flake was critical of Trump during the 2016 campaign and has clashed with the President regularly over the past year, criticisms he wrote about in his book, "Conscience of a Conservative."

The senator announced last month that he would not run for reelection next year, delivering a blistering speech on the Senate floor that bemoaned the "coarsening" tenor of politics in the United States.

In the speech, Flake denounced the "complicity" of his own party in what he called an "alarming and dangerous state of affairs" under Trump, blaming the President for setting the tone. In his speech, Flake assailed a "flagrant disregard for truth or decency" and attacked a "regular and casual undermining of our democratic norms."