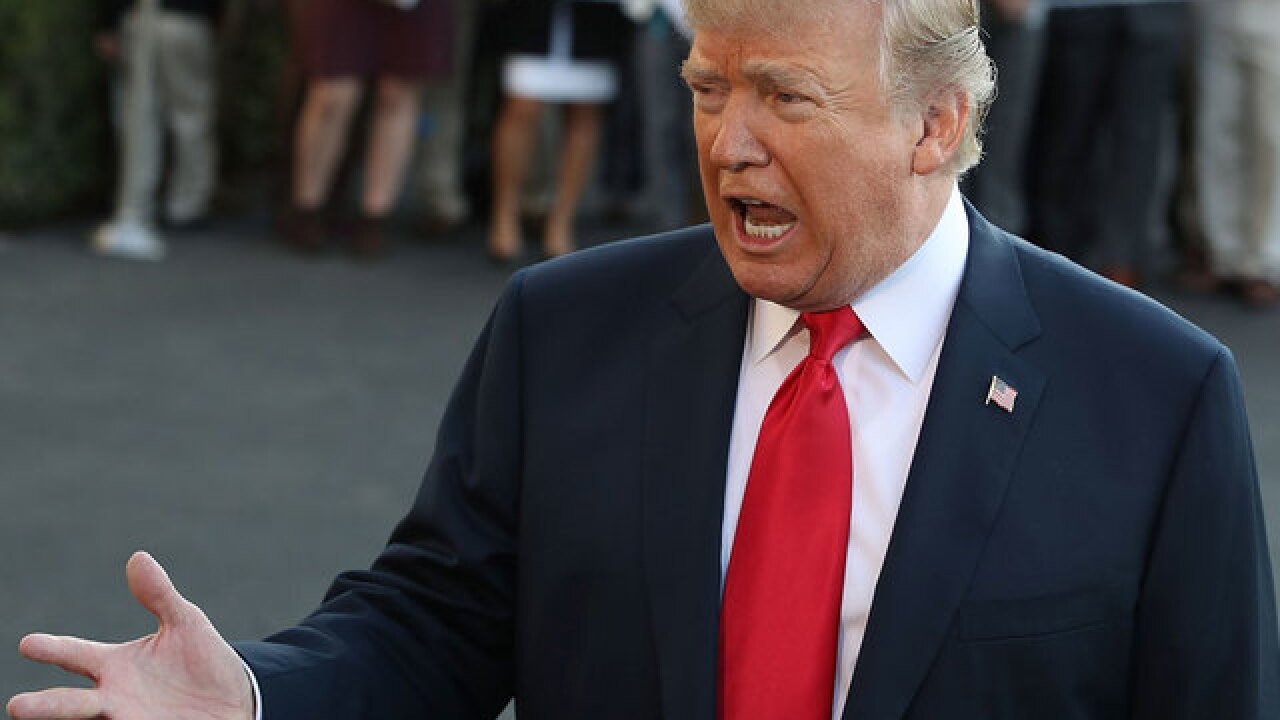 Copyright Getty Images
Mark Wilson
President Trump talks to the media before he and first lady Melania Trump depart on Marine One on November 3, 2017 in Washington, D.C.

Trump attacks Democrats, calls Warren "Pocahontas" in Twitter rampage
-- President Trump once again criticized Hillary Clinton and the Democrats, urging the Department of Justice and the FBI to investigate the party.

In a series of Friday morning tweets, the president said: "Everybody is asking why the Justice Department (and FBI) isn't looking into all of the dishonesty going on with Crooked Hillary & the Dems.."

He continued target Clinton, referencing a book by former acting Democratic National Committee Chair Donna Brazile : "New Donna B book says she paid for and stole the Dem Primary. What about the deleted E-mails, Uranium, Podesta, the Server, plus, plus... People are angry. At some point the Justice Department, and the FBI, must do what is right and proper. The American public deserves it!"

Trump then added: "The real story on Collusion is in Donna B's new book. Crooked Hillary bought the DNC & then stole the Democratic Primary from Crazy Bernie!"

In an interview with CNN, Warren said she believed the DNC was pushed in favor of Clinton over 2016 primary opponent Sen. Bernie Sanders.

Asked if the DNC system was rigged in Clinton's favor during the 2016 election, Sen. Elizabeth Warren says "yes" https://t.co/VvlNhQYTPH pic.twitter.com/J55EhbXjXy

Trump had previously referred to Warren as Pocahontas during his presidential run over her much-scrutinized claims of Native American ancestry.

Trump later said: "Bernie Sanders supporters have every right to be apoplectic of the complete theft of the Dem primary by Crooked Hillary! I always felt I would be running and winning against Bernie Sanders, not Crooked H, without cheating, I was right."

Twitter initially said Trump's account was "inadvertently deactivated due to a human error" at about 4 p.m. Pacific time. The account feed displayed a message that read: "Sorry, that page doesn't exist!"

A couple of hours later, Twitter announced further investigation revealed "a Twitter customer support employee ... did this on the employee's last day."

Trump reacted to the issue with his account on Friday morning, tweeting: "My Twitter account was taken down for 11 minutes by a rogue employee. I guess the word must finally be getting out-and having an impact"

Trump says ISIS to pay "big price" after NYC attack
-- A day after saying the suspect in the Manhattan terror attack should receive the death penalty, President Trump promised strong action against ISIS.

ISIS just claimed the Degenerate Animal who killed, and so badly wounded, the wonderful people on the West Side, was "their soldier." .....

...Based on that, the Military has hit ISIS "much harder" over the last two days. They will pay a big price for every attack on us!