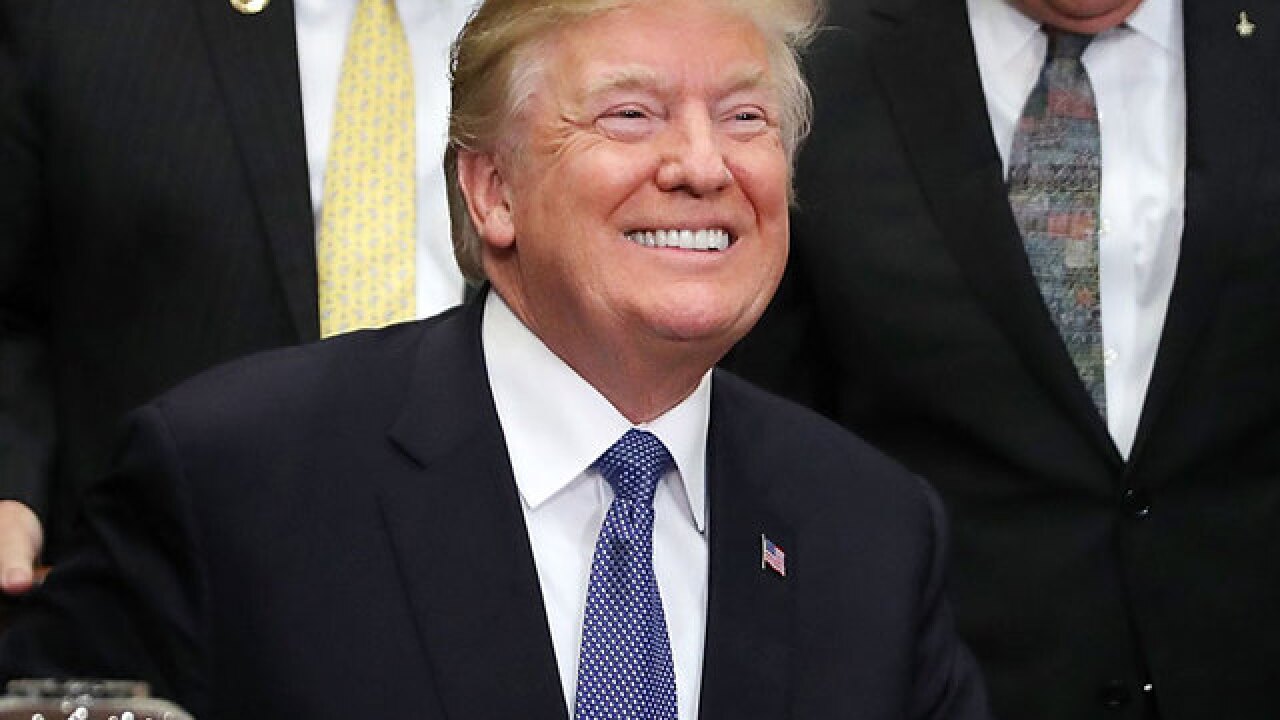 Copyright Getty Images
Chip Somodevilla
President Donald Trump smiles after signing 'Space Policy Directive 1' during a cereomny in the Roosevelt Room at the White House December 11, 2017 in Washington, DC. On the 45th anniversary of Apollo 17 -- the last crewed mission to the moon -- Trump signed the order directing NASA 'to lead an innovative space exploration program to send American astronauts back to the Moon, and eventually Mars,' according White House spokesman Hogan Gidley.

Trump tweeted Tuesday morning: "Despite thousands of hours wasted and many millions of dollars spent, the Democrats have been unable to show any collusion with Russia - so now they are moving on to the false accusations and fabricated stories of women who I don’t know and/or have never met. FAKE NEWS!"

The response comes one day after several women came described alleged incidents involving Trump prior to his presidency.

At least three of Trump's accusers have asked for a congressional inquiry into the allegations, and several Democrats are calling for the president to resign from office.

Sen. Kirsten Gillibrand, one of the Democrats who urged Trump to resign, was singled out by the president in a tweet.

"Lightweight Senator Kirsten Gillibrand, a total flunky for Chuck Schumer and someone who would come to my office “begging” for campaign contributions not so long ago (and would do anything for them), is now in the ring fighting against Trump. Very disloyal to Bill & Crooked-USED!"

You cannot silence me or the millions of women who have gotten off the sidelines to speak out about the unfitness and shame you have brought to the Oval Office. https://t.co/UbQZqubXZv

President Trump once again threw his support behind Moore, tweeting: "The people of Alabama will do the right thing. Doug Jones is Pro-Abortion, weak on Crime, Military and Illegal Immigration, Bad for Gun Owners and Veterans and against the WALL. Jones is a Pelosi/Schumer Puppet. Roy Moore will always vote with us. VOTE ROY MOORE!"

Moore's campaign has been overshadowed by allegations that he sexually assaulted several teen girls when he was in his 30s. Moore has denied the accusations.

Some polls show Democratic candidate Doug Jones leading Moore by as many as 10 points, but some organizations, including The Associated Press, say the race is still too close to call.

Consumer Confidence is at an All-Time High, along with a Record High Stock Market. Unemployment is at a 17 year low. MAKE AMERICA GREAT AGAIN! Working to pass MASSIVE TAX CUTS (looking good).