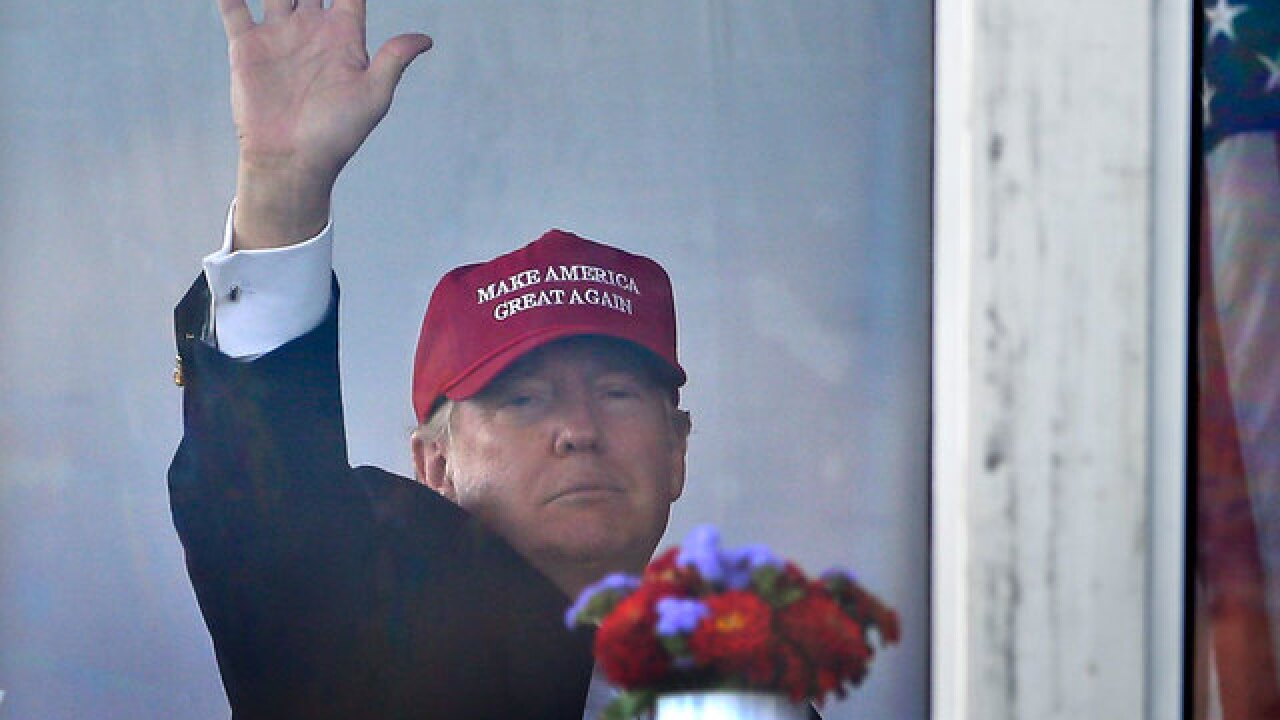 Copyright Associated Press
Seth Wenig
President Donald Trump waves to spectators as he watches the third round of the U.S. Women's Open Golf tournament from his observation booth, Saturday, July 15, 2017, in Bedminster, N.J.

Trump's morning tweet(s):
-- The president went on Twitter Monday morning and said, referring to the ongoing controversy over his son's meeting with a Russian lawyer: "Most politicians would have gone to a meeting like the one Don jr attended in order to get info on an opponent. That's politics!"

Most politicians would have gone to a meeting like the one Don jr attended in order to get info on an opponent. That's politics!

To start, a showcase will be held Monday at the White House that will highlight products made in all 50 states. Later this week, President Trump is expected to issue a proclamation on the importance of American-made goods.

White House Director of Media Affairs Helen Aguirre Ferre said, "For too long our government has forgotten the American worker. Their interests were pushed aside for global projects and their wealth was taken from the communities and shipped overseas. Under the leadership of President Donald Trump, not only will the American worker never be forgotten, but they will be championed."

The White House said next week would be "American Heroes Week," followed by "American Dreams Week."

Future of health care bill remains up in the air
-- The future of the Republicans' health care bill is once again in peril this week after Sen. John McCain underwent surgery for a blood clot and announced he would not be able to return to Washington to vote on legislation to overhaul Obamacare.

Also, the Congressional Budget Office postponed its release of an analysis of the latest iteration of the bill. No explanation was given.

The delay allows more time for Republicans to review the Better Care Act, first unveiled last Thursday. But there's no guarantee the extra time will accomplish anything except giving senators more heartburn.

The majority leader needs to secure 50 votes to advance the bill and already had two members -- Sens. Rand Paul of Kentucky and Susan Collins of Maine -- vowing to vote against the legislation.

Secret Service: Trump Jr. not under protection at time of Russia meeting
-- The Secret Service is pushing back on President Donald Trump's attorney's remarks that there was nothing questionable going on at a meeting last summer between Trump's eldest son, Donald Trump Jr., a Russian lawyer and top members of Trump's campaign.

After Sekulow's comments aired, the Secret Service responded that it wouldn't have checked out the participants of the meeting because Trump's eldest son wasn't in their charge.

"Donald Trump Jr. was not a protectee of the USSS in June, 2016," the agency told CNN in a statement. "Thus we would not have screened anyone he was meeting with at that time."