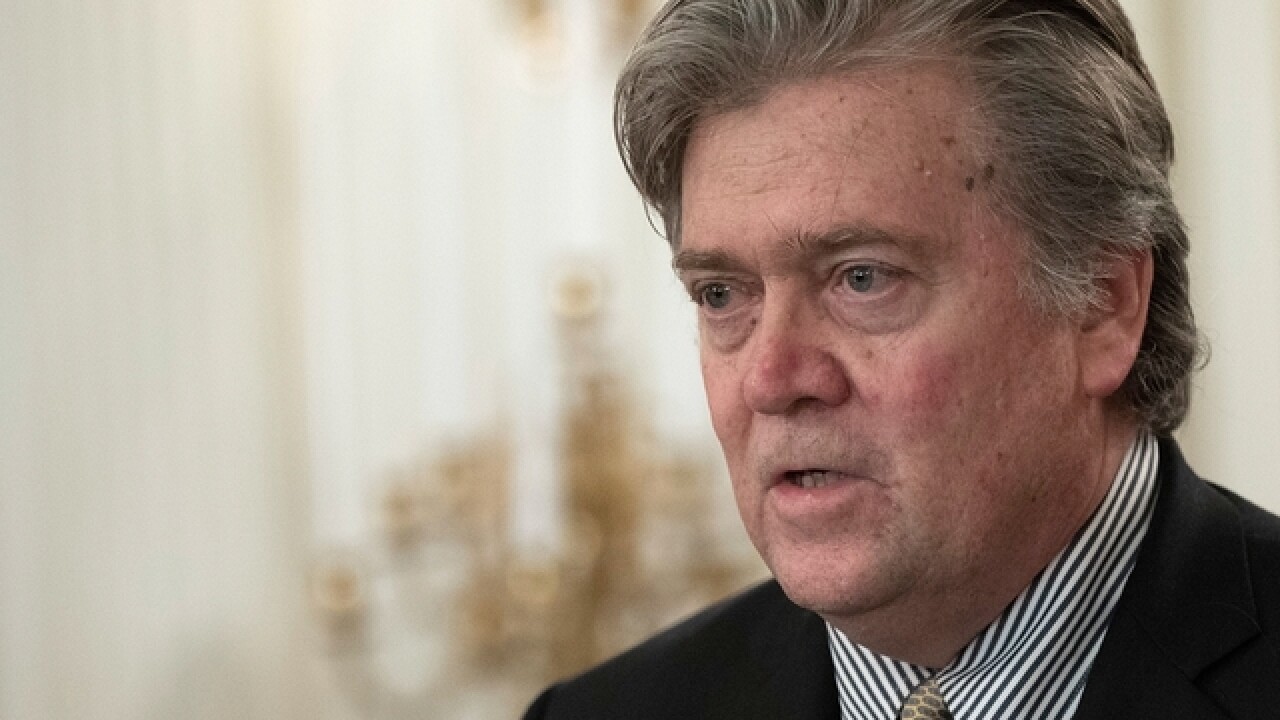 Bannon cuts deal to only speak to Special Counsel's team
-- Steve Bannon, President Trump's former chief strategist, has agreed to a deal in which he will not testify before a grand jury and only be interviewed by Special Counsel Robert Mueller's investigators, CNN reported.

Citing unnamed sources, CNN reported Bannon is expected to talk openly to Mueller's team. Bannon's attorney told the House Intelligence Committee on Tuesday that Bannon would answer questions when he goes to the special counsel because executive privilege would not apply, according to one of the sources

A spokesman for the special counsel's office declined to comment on CNN's report.

During nearly 10 hours of questioning on Tuesday, Bannon refused to comment when asked about his time working at the White House. Bannon was reportedly asked about the firing of FBI Director James Comey and accusations of money laundering against some Trump campaign officials.

Bannon was served multiple subpoenas, including one from the FBI, according to the Wall Street Journal.

FBI has subpoenaed Steve Bannon, who plans to cooperate with the special counsel's investigation https://t.co/9XscbGTxDR

The Wall Street Journal reported on Friday that Trump attorney Michael Cohen had arranged a $130,000 payment to keep Clifford silent about the alleged relationship in October 2016. Cohen, Clifford, and the White House denied the report.

The allegation of a relationship was no secret to Fox News, though.

One of the network's reporters, Diana Falzone, had filed a story in October 2016 about an alleged sexual relationship between Clifford and Trump, people familiar with the matter said.

Falzone had an on-the-record statement from Clifford's manager at the time, Gina Rodriguez, confirming that her client had engaged in a sexual relationship with Trump, three of these people said, and Falzone had even seen emails about a settlement.

But the story never saw the light of the day, to the frustration of Falzone, two of the people said.

DACA ruling could head to Supreme Court
-- The Justice Department filed an appeal in hopes of having the U.S. Supreme Court rule on the future of the Deferred Action for Childhood Arrivals (DACA) program.

Earlier this month, a federal judge in California ruled that the government could not end DACA, which protects undocumented immigrants brought to the U.S. as children.

On Tuesday, DOJ officials filed an appeal on the ruling but they are looking to bypass a federal appeals court this time.

The Supreme Court almost never hears cases before an appeals court ruling, but it is allowed to do so if the case has an "imperative public importance" and requires immediate action.