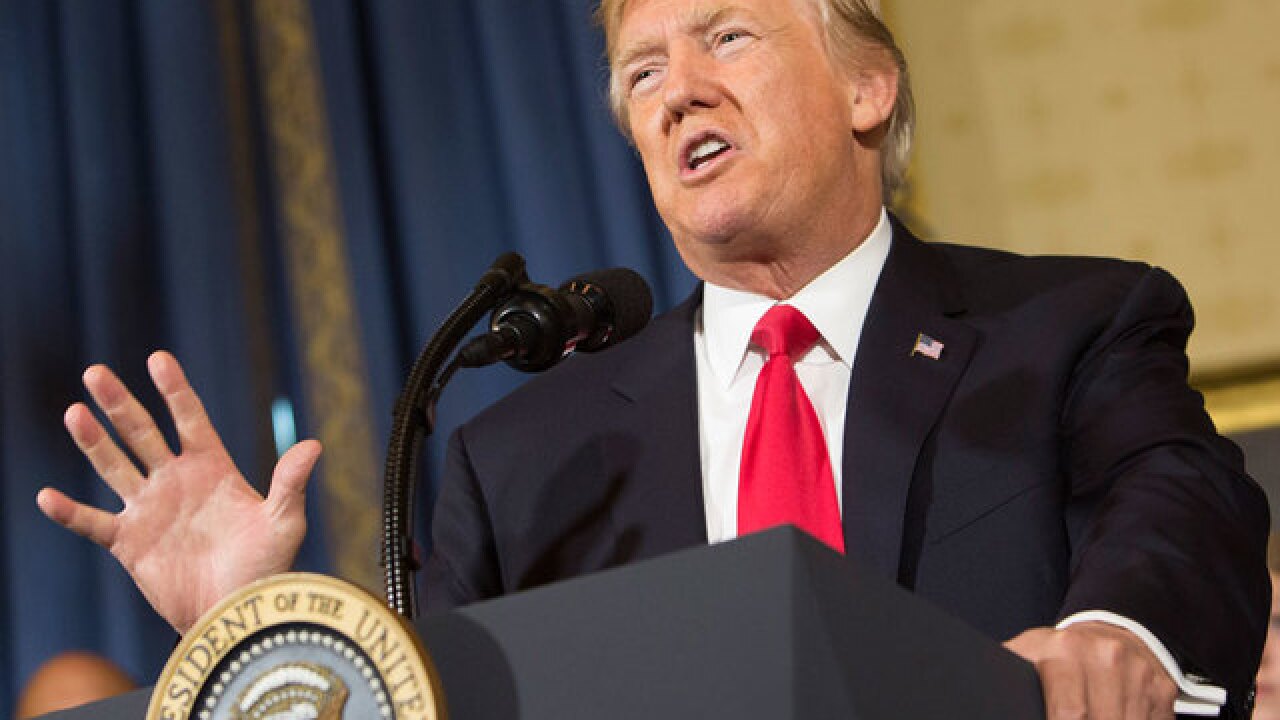 President once again urges Senate GOP to repeal Obamacare
-- Shortly after the Senate convened for another round of debates over the health care bill, President Trump took to Twitter Thursday morning with yet another push for Senate Republicans.

Trump tweeted: "Come on Republican Senators, you can do it on Healthcare. After 7 years, this is your chance to shine! Don't let the American people down!"

On Tuesday, the so-called "repeal and delay" amendment which would have rolled back Obamacare without a replacement in place was defeated in the Senate.

The vote was 45-55, with seven Republicans opposing the measure.

Trump's transgender military ban draws response
-- President Trump's announcement that transgender people would not be allowed to serve in the U.S. military, citing "medical costs and disruption," was met with backlash.

On Twitter Wednesday, Trump said: "After consultation with my Generals and military experts, please be advised that the United States Government will not accept or allow...... Transgender individuals to serve in any capacity in the U.S. Military. Our military must be focused on decisive and overwhelming..... victory and cannot be burdened with the tremendous medical costs and disruption that transgender in the military would entail. Thank you"

Trump's decision would revoke a policy approved by the U.S. Department of Defense under President Obama, which allowed transgender individuals to serve in the military.

The president's statement drew many responses from all around, including:

There are 15,000 patriotic transgender Americans in the US military fighting for all of us. What happened to your promise to fight for them? https://t.co/WzjypVC8Sr

so, biggest baddest most $$ military on earth cries about a few trans people ? but funds the F-35? ? sounds like cowardice ??? #WeGotThis

My fellow trans Americans despite what some may say your existence is valuable. Your lives, safety, & service matter. #TransIsBeautiful

#SF shines brightly in solidarity w/
all the transgender people who have courageously served in the US Military. #TransRightsAreHumanRights pic.twitter.com/Cno2y96Fqm

TONIGHT: The President's morning tweets are often crazy, but seldom as cruel as the pronouncement he made this morning. #LSSC pic.twitter.com/196q1P6Uo6

The Trump administration has not indicated when and how the changes will take effect.

Trump set to meet first responders in Virginia shooting
-- The president is scheduled today to meet with the first responders from the June 14 shooting in Alexandria, Virginia, that injured Rep. Steve Scalise and several others.

As part of the administration's "American Heroes Week," President Trump will honor the first responders at an afternoon ceremony at the White House.

Scalise was shot and hospitalized after a gunman opened fire during a baseball practice involving other Republican lawmakers.

Scalise was released from the hospital earlier this week.

Scaramucci deletes tweet on chief of staff and leaks
-- White House Communications Director Anthony Scaramucci tweeted and then deleted a statement regarding the illegal leak of his financial disclosure information that mentioned Chief of Staff Reince Priebus.

In the since-deleted tweet on Wednesday, Scaramucci said: "In light of the leak of my financial disclosure info which is a felony, I will be contacting @FBI and the @JusticeDept #swamp @Reince45."

Since taking the job, Scaramucci has said he plans on doing all he can to stop White House information leaks.

Clinton titles book on campaign loss "What Happened"
-- Hillary Clinton's upcoming book on her 2016 presidential campaign and loss to Donald Trump will be called "What Happened," according to The Associated Press.

Publisher Simon & Schuster told AP that Clinton will describe the "intense personal experience" of being the first woman nominated by a major party for president. The publisher said the book also will "connect the dots" about Russian interference in the election and describe what it was like to run against an unorthodox candidate.

"What Happened" is scheduled to be released Sept. 12.

Clinton's previous works include the memoir "Living History" and a book about her years as secretary of state, "Hard Choices." She also wrote "It Takes a Village: And Other Lessons Children Teach Us" when she was first lady.

CNN and AP contributed to this report