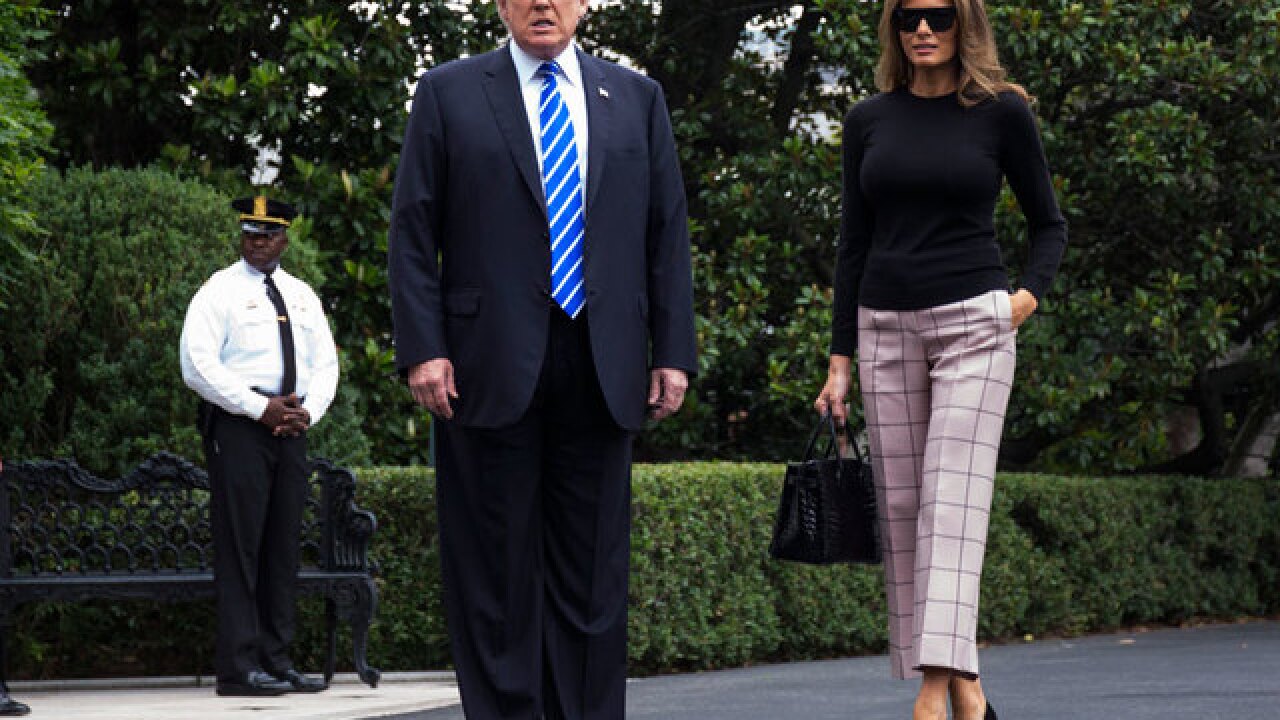 Copyright Getty Images
Zach Gibson
President Donald Trump and First Lady Melania Trump are pictured before departing from the South Lawn at The White House on July 5, 2017, in Washington, DC. President Trump will travel to Warsaw, Poland and Hamburg, Germany.

Trump heads to Europe
-- President Trump left Wednesday morning for Poland, where he will stop for a brief visit before heading to Germany for the much-anticipated G20 summit.

Trump is scheduled to speak in Warsaw and then travel to Hamburg for the two-day G20 summit with other world leaders.

Trump and Russian President Vladimir Putin will have a bilateral meeting on the first day of the summit (July 7), and the presidents are expected to discuss conflicts in Syria and Ukraine.

President criticizes China over North Korea trade
-- Prior to his departure for Europe, President Trump tweeted his disappointment with China for not doing enough to put pressure on North Korea about its nuclear program.

On Monday, North Korean officials confirmed a missile test, prompting the president to tweet: "North Korea has just launched another missile. Does this guy have anything better to do with his life?" and "Hard to believe that South Korea and Japan will put up with this much longer. Perhaps China will put a heavy move on North Korea and end this nonsense once and for all!"

The United States made some of the worst Trade Deals in world history.Why should we continue these deals with countries that do not help us?

Trade between China and North Korea grew almost 40% in the first quarter. So much for China working with us - but we had to give it a try!

Trump is scheduled to meet with Chinese President Xi Jinping at the G20 summit in Germany this week.

Report: Trump's economic plan is working
-- According to a new report, President Trump's aggressive stance on global trade may be working in America's favor.

America's biggest trade partners have taken far fewer protectionist measures against U.S. business so far this year, possibly because they're worried about retaliation, according to the authors of the Global Trade Alert -- published by the London-based Centre for Economic Policy Research.

The report found that other G20 economies inflicted 52 "hits" against U.S. commercial interests in the first half of 2017, 29% fewer than in the same period last year, and a similar decline versus 2015.

The "hits" include tariffs, duties and quotas on U.S. imports, anti-dumping measures, and tax incentives for exporters that could hurt American companies.

"The G20 countries that had hit U.S. interests more often before President Trump was elected are the very G20 countries that have cut back on protectionism the most in 2017," said Simon Evenett, professor of economics at Switzerland's St. Gallen University and one of the authors of the Global Trade Alert. "Why should [they] do that unless they feared being singled out for retaliation?"