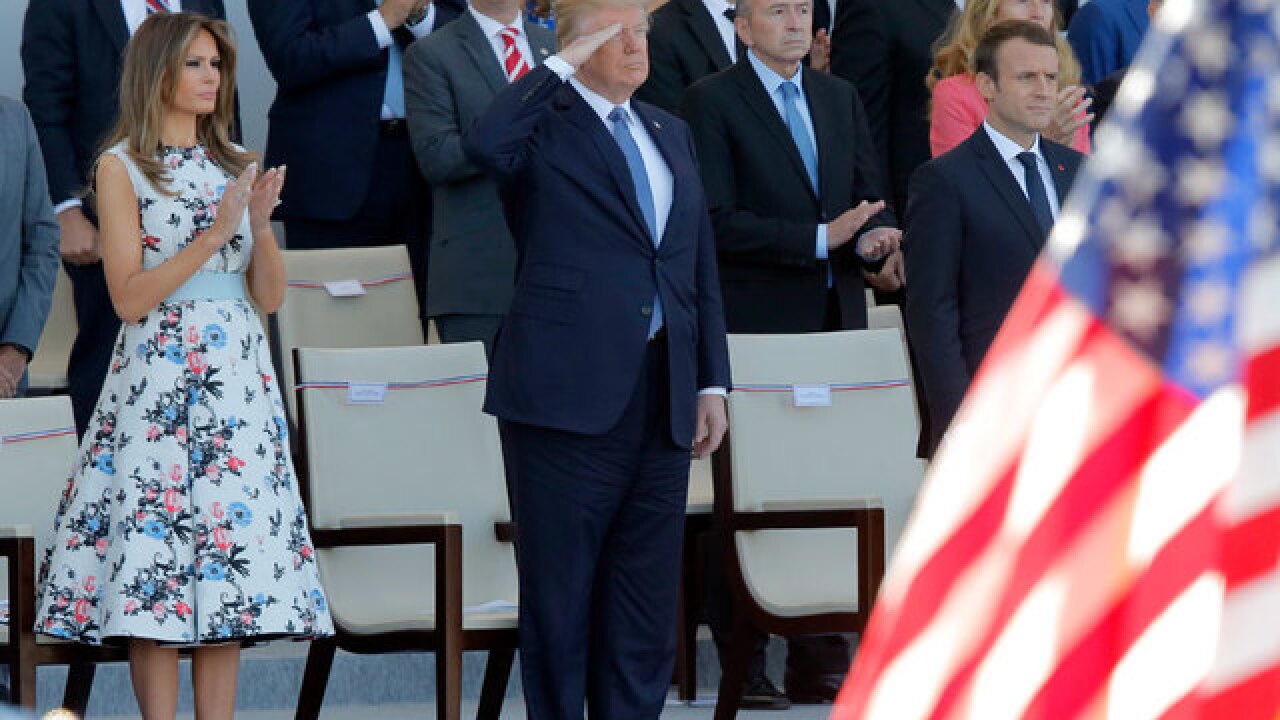 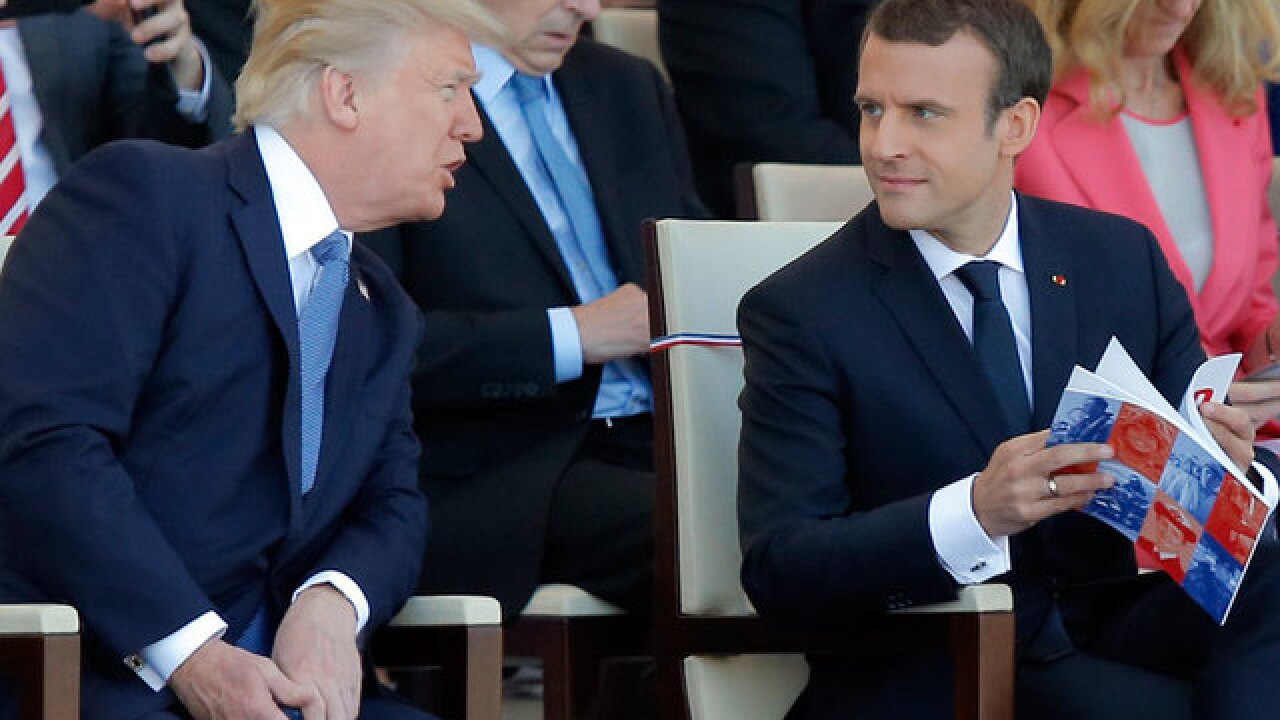 During the short trip, Trump largely avoided speaking on the controversy swirling around his son's meeting with a Russian lawyer last year.

Great evening with President @EmmanuelMacron & Mrs. Macron. Went to Eiffel Tower for dinner. Relationship with France stronger than ever. pic.twitter.com/ib1pdUYoEU

It was a great honor to represent the United States at the magnificent #BastilleDay parade. Congratulations President @EmmanuelMacron! pic.twitter.com/1J4vZiy98y

Trump said he and Macron had "great conversations" regarding trade, military and security.

Before departing France, Trump referenced last year's attack in Nice, saying: "The United States mourns for the victims of Nice, France. We pledge our solidarity with France against terror."

The president confirmed his weekend plans by saying he would attend the U.S. Women's Open golf tournament in Bedminster, New Jersey.

Trump wants "transparency" for proposed border wall
-- A border wall you can see through? That's apparently what President Trump wants for his long-promised wall along the U.S.' southern border.

According to a CNN report, Trump told reporters earlier this week that he wants the wall to have "openings" to see through, adding, "One of the things with the wall is you need transparency. You have to be able to see through it. In other words, if you can't see through that wall -- so it could be a steel wall with openings, but you have to have openings because you have to see what's on the other side of the wall."

Picking up on the theme laid out by Homeland Security Secretary John Kelly and other border experts and agents, Trump spoke about the need for any border barrier to allow agents to see the other side. Much of the current barriers along the border are metal fencing.

Experts have noted that with potentially violent cartels looking to smuggle people, drugs and other illicit goods into the US, it's essential that agents have visibility on their movements.

Trump offered another example: "As horrible as it sounds, when they throw the large sacks of drugs over, and if you have people on the other side of the wall, you don't see them -- they hit you on the head with 60 pounds of stuff? It's over," Trump said. "As crazy as that sounds, you need transparency through that wall."

WH aides exposed to scrutiny over Russia meeting response
-- A scramble by White House aides to respond to the brewing controversy over Donald Trump Jr.'s meeting with a Russian lawyer may have exposed those aides to special counsel scrutiny.

They can now be called on by investigators led by Special Counsel Robert Mueller to explain what they may have learned about the meeting that the President's eldest son, Trump Jr., his son-in-law, Jared Kushner, and then-Trump campaign chairman Paul Manafort had with the Russian lawyer during the 2016 campaign.

Ex-staffer indicted for spreading nude images of lawmaker
-- A former congressional staffer was indicted Thursday on charges that he spread nude and embarrassing images online of his lawmaker boss, the delegate to Congress from the US Virgin Islands.

According to court documents, Juan McCullum took "private, nude images and videos" from the cellphone of Del. Stacey Plaskett in March 2016 after offering to "assist (the delegate) in repairing her malfunctioning, password-protected cellular phone by taking her iPhone to a local Apple store."

The following July, an indictment alleges, McCullum created a fake email account and sent at least 10 messages with one or more of the images attached to members of the media, other politicians and people known to Plaskett. He also posted the images online to a phony Facebook account, the indictment says.

McCullum, 35, is charged with two counts of cyberstalking. Another former Plaskett staffer, Dorene Browne-Louis, faces obstruction of justice charges for allegedly misleading law enforcement on the case and deleting text messages from McCullum, according to the Thursday indictment.

In a statement, Plaskett said that she was "deeply grateful to the Capitol Police and US Attorney for the District of Columbia for their thorough and in depth investigating of the crimes committed against me and those who I love."