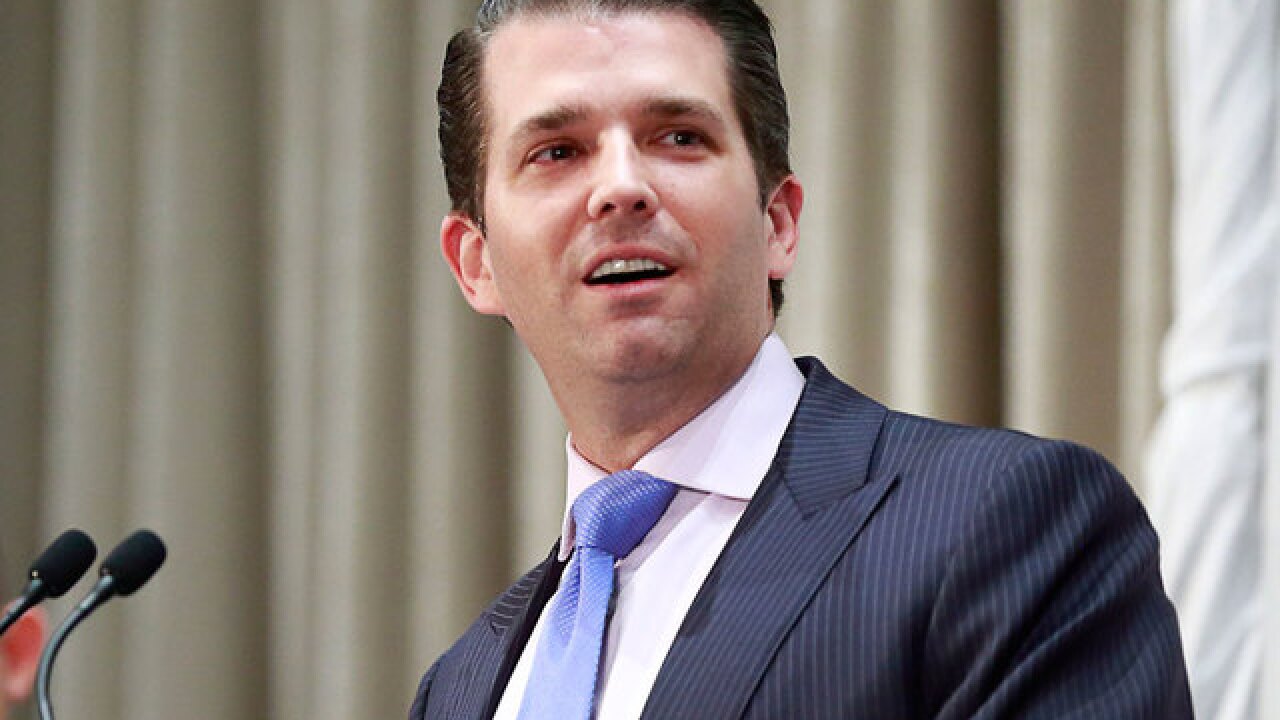 Copyright Getty Images
Jeff Vinnick
Donald Trump Jr. delivers a speech during a ceremony for the official opening of the Trump International Tower and Hotel on February 28, 2017 in Vancouver, Canada.

President's son facing scrutiny over Russia revelation
-- Donald Trump Jr. has brought even more attention to the White House after he admitted to meeting with a Russian lawyer during the 2016 presidential election.

Trump Jr. spoke about the June 2016 meeting in response to a New York Times report . He said he took the meeting with a Kremlin-linked lawyer because he believed he would be receiving information about possible connections between Russia, the Democratic National Committee and Hillary Clinton.

According to The New York Times' report, Trump Jr. was "promised damaging information about Hillary Clinton" before agreeing to the meeting. Trump Jr., the president's then-campaign manager and son-in-law Jared Kushner were all at the meeting, it was reported.

Trump Jr. tweeted about the report:

Obviously I'm the first person on a campaign to ever take a meeting to hear info about an opponent... went nowhere but had to listen. https://t.co/ccUjL1KDEa

When the Times' report was first published, Trump Jr. said the meeting was regarding a Russian adoption program.

Meanwhile, the president's outside legal team said he did not know about the meeting.

Trump defends daughter's presence at G20 meeting
-- President Trump hit back at those critical of his decision to have daughter Ivanka Trump briefly sit in for him at a table the G20 summit over the weekend.

A Russian delegate tweeted a photo of Ivanka summit in Hamburg, Germany, Saturday, sparking criticism from those who felt the move was inappropriate.

Had Michelle Obama (more qualified than Ivanka) filled Barack's seat at the G-20, the media and the GOP would be calling for impeachment.

Trump decided it was take your child to work day but he forgot to go himself. Ivanka Trump went to the G20 instead of her dad

Ivanka, couldn't you have at least re-admitted us to the Paris Climate Accords during your brief reign? https://t.co/J8SczFoOr2

When I left Conference Room for short meetings with Japan and other countries, I asked Ivanka to hold seat. Very standard. Angela M agrees!

If Chelsea Clinton were asked to hold the seat for her mother,as her mother gave our country away, the Fake News would say CHELSEA FOR PRES!

Conway made the claims in an interview with CNN's Chris Cuomo on Monday morning. In the interview, Conway said "the big bombshell of the day" was Comey sharing classified information, citing a report she said she read on The Hill website .

In response to The Hill's report and Conway's statements, the president tweeted:

James Comey leaked CLASSIFIED INFORMATION to the media. That is so illegal!

During his testimony in June, Comey testified that he gave his memos to a friend so it can be leaked to the media.

"My view is it's probably going to be dead," the Arizona Republican said on CBS's "Face the Nation."

Last month, Senate Majority Leader Mitch McConnell unveiled a bill that had been written behind closed doors by a group of Republican senators. McConnell decided not to call a vote on the measure before the Senate's break for the July Fourth holiday as it appeared not to have enough Republican support.

McCain was critical of the process and said the Republicans should "go back to the beginning" and include both parties in the deliberations, letting Democrats have amendments considered to the bill.