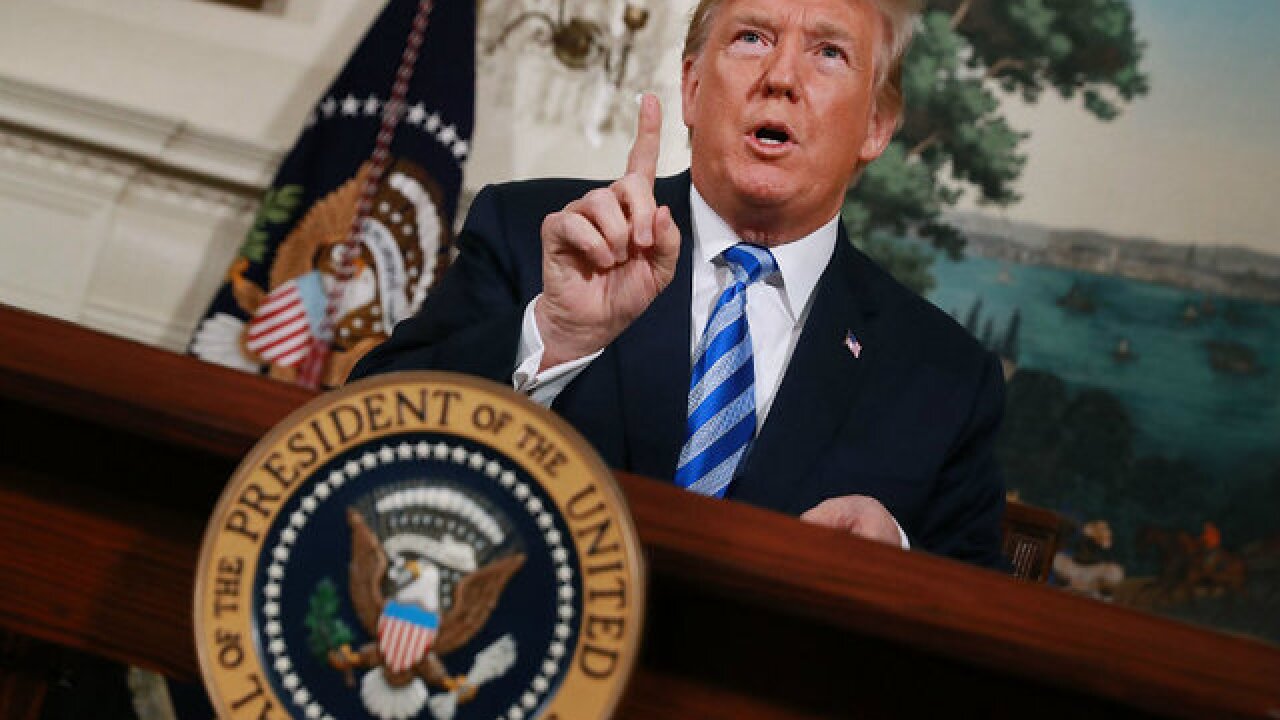 Copyright Getty Images
Chip Somodevilla
President Donald Trump announces his decision to withdraw the United States from the 2015 Iran nuclear deal in the Diplomatic Room at the White House May 8, 2018 in Washington, DC.

Here's what's making headlines in the political world on Tuesday, May 8, 2018:

Trump announces U.S. will withdraw from Iran deal
-- President Trump announced Tuesday morning that he will pull the U.S. from the Iran nuclear deal and will reinstitute tough sanctions against the country.

Trump called the landmark nuclear accord with Iran "defective at its core," adding: "If I allowed this deal to stand, there would soon be a nuclear arms race in the Middle East."

"It is clear to me that we cannot prevent an Iranian nuclear bomb under the decaying and cotton structure of the current agreement," he said. "The Iran deal is defective at its core. If we do nothing we know exactly what will happen."

Trump has been critical of the 2015 deal, which includes the U.S., Iran, France, Russia, China, the United Kingdom and Germany.

The pact was reached as a way to monitor Iran's nuclear program and keep the country from developing atomic weapons. In exchange, it meant an end to economic sanctions against Iran.

Some world leaders have urged Trump to keep the U.S. in the deal, but the president has gone on record with his dissatisfaction with the agreement, often calling it a “horrible” deal.

Earlier in the day, Trump took to Twitter to criticize former Secretary of State John Kerry, who helped negotiate the 2015 deal under the Obama administration.

Trump said: “John Kerry can’t get over the fact that he had his chance and blew it! Stay away from negotiations John, you are hurting your country!”

John Kerry can’t get over the fact that he had his chance and blew it! Stay away from negotiations John, you are hurting your country!

Trump appeared to have been reacting to Kerry’s statements at a conference in Milan regarding the benefits of the pact.

In an interview with CNNMoney, OPEC Secretary General Mohammad Barkindo said that any factor that prevents the smooth running of the oil industry "will not be in the interest of the global economy."

"Whatever extraneous factor that affects supply or demand, will no doubt send the market into disequilibrium, which is not in the interest of producers, or the interest of consumers," he said when asked about the consequences of ditching the Iran nuclear agreement.

Trump has repeatedly threatened to rip up the Iran accord, which he has described as "the worst deal ever."

Trump keeps up support for "tough on terror" Haspel
-- President Trump on Tuesday kept up a drumbeat of public support for his CIA director nominee, Gina Haspel, ahead of her confirmation hearing this week.

"Gina Haspel, my highly respected nominee to lead the CIA, is being praised for the fact that she has been, and alway (sic) will be, TOUGH ON TERROR! This is a woman who has been a leader wherever she has gone. The CIA wants her to lead them into America's bright and glorious future!"

Gina Haspel, my highly respected nominee to lead the CIA, is being praised for the fact that she has been, and alway will be, TOUGH ON TERROR! This is a woman who has been a leader wherever she has gone. The CIA wants her to lead them into America’s bright and glorious future!

Haspel, who has been tapped to succeed current Secretary of State Mike Pompeo, is likely to face questions about her past involvement with the CIA's controversial interrogation program during her confirmation hearing on Wednesday.