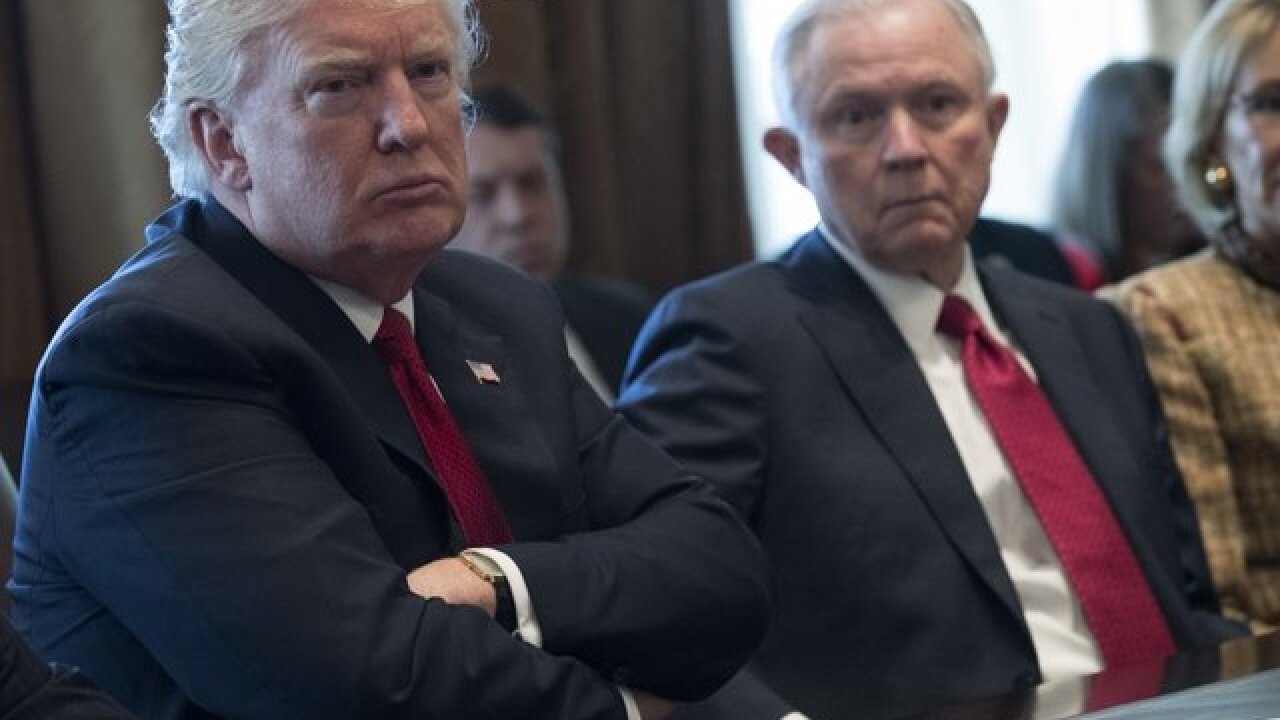 Sessions responds to Trump's statements
-- U.S. Attorney General Jeff Sessions said he plans to continue in his job despite President Donald Trump's comments that he'd have picked someone else had he known Sessions would recuse himself from the Justice Department's Russia investigation.

"We love this job. We love this department, and I plan to continue to do so as long as that is appropriate," Sessions told reporters Thursday.

In a New York Times interview published Wednesday, Trump second-guessed his decision to nominate Sessions, an Alabama Republican who was the first sitting senator to back the real estate mogul's presidential bid.

"Jeff Sessions takes the job, gets into the job, recuses himself, which, frankly, I think is very unfair to the President," Trump said, referring to himself. "How do you take a job and then recuse yourself? If he would have recused himself before the job, I would have said, 'Thanks, Jeff, but I'm not going to take you.' It's extremely unfair -- and that's a mild word -- to the President."

Well-wishes pour in for McCain
-- Following the Wednesday announcement of Sen. John McCain's brain cancer diagnosis, many well-wishes poured in for the Arizona Republican on social media.

Thank all of you for the wonderful thoughts. @senjohnmccain is doing well. We as a family will face the next hurdle together. One thing I do know is he is the toughest person I know. He is my hero and I love him with all my heart.

Melania and I send our thoughts and prayers to Senator McCain, Cindy, and their entire family. Get well soon. https://t.co/fONWVlmYyz

Karen & I are praying for @SenJohnMcCain. Cancer picked on the wrong guy. John McCain is a fighter & he'll win this fight too. God bless!

John McCain is an American hero & one of the bravest fighters I've ever known. Cancer doesn't know what it's up against. Give it hell, John.

John and I have been friends for 40 years. He's gotten through so much difficulty with so much grace. He is strong - and he will beat this.

.@SenJohnMcCain is one of the toughest men I know. God speed in fighting this one, John. Prayers are with you and your family

Doctors discovered a brain tumor while McCain was undergoing surgery to remove a blood clot.

While the cancer is said to be rare and aggressive, McCain himself said that he would "be back soon."

I greatly appreciate the outpouring of support - unfortunately for my sparring partners in Congress, I'll be back soon, so stand-by!

Trump Jr. and former Trump campaign manager Paul Manafort will appear before the Senate Judiciary Committee to discuss the controversial meeting with a Russian lawyer.

Besides Trump Jr. and Manafort, Trump's son-in-law Jared Kushner and several other campaign associates met with lawyer Natalia Veselnitskaya at Trump Tower in June 2016. It's been reported Veselnitskaya claimed to have damaging information on campaign opponent Hillary Clinton.

Kushner is expected to testify before the Senate Intelligence Committee on Monday in a closed-door session.

Veselnitskaya told a Russian TV station that she was willing to testify before the Senate to reveal what information she had and her role in the meeting.