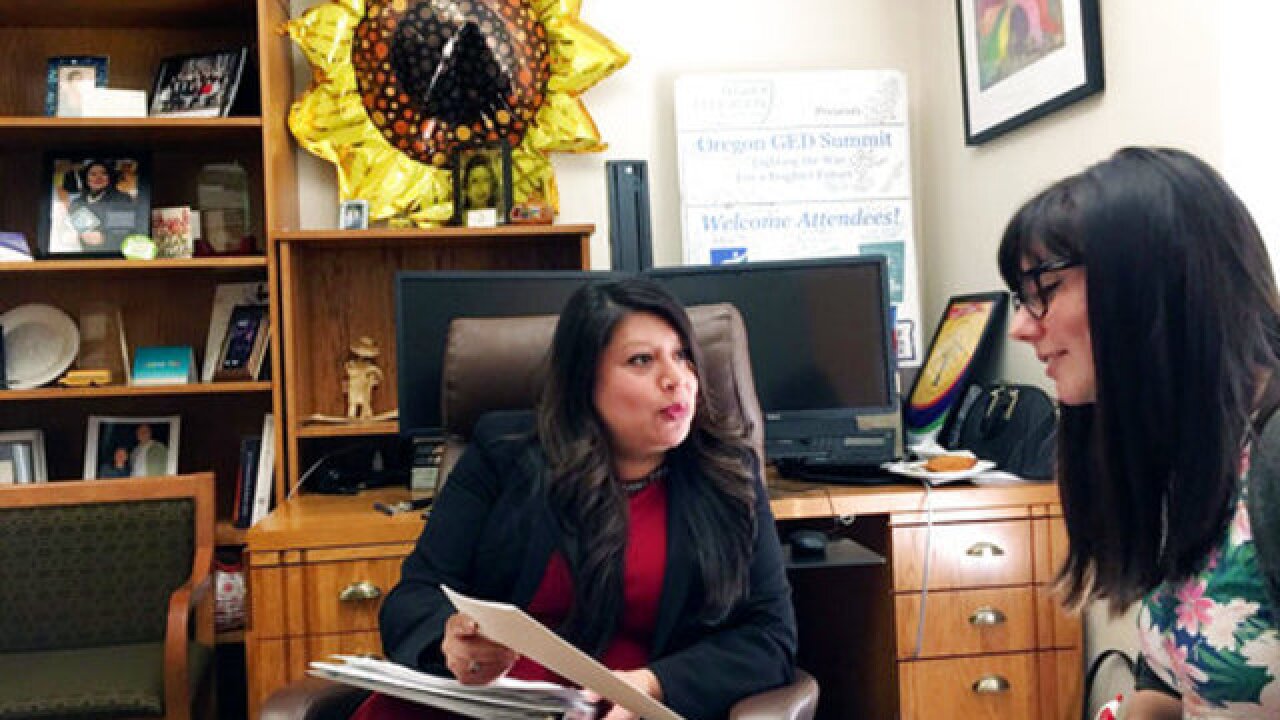 WOODBURN, Ore. (AP) — Teresa Alonso Leon envisioned a better life in a promised land when she was brought from Mexico to America as a young girl. Instead, her family wound up in an unheated house in Oregon with no indoor plumbing, eking out a living by picking strawberries.

It is all the more remarkable, then, that Alonso Leon became one of the first people brought to the U.S. illegally to become a lawmaker in America when she was elected last November to Oregon's Legislature.

Alonso Leon's victory "shows that human potential does not know immigration status, and that among America's immigrants, especially those who have come here as children and benefited from the right to education, their potential offers leadership for the country," said Arturo Vargas, executive director of the National Association of Latino Elected and Appointed Officials.

The irony that Alonso Leon was elected the same day that Donald Trump beat Hillary Clinton is not lost on her.

"We didn't get our woman president that we were hoping for, but they got me as a legislator," Alonso Leon said with a laugh in her small office in the Oregon Capitol.

Alonso Leon, a Democrat, became a U.S. citizen in 2012. Now, with Trump stepping up immigration enforcement, she sees herself as a defender of her constituents. Her district is centered around the predominantly Latino town of Woodburn, 30 miles (48 kilometers) south of Portland.

U.S. Customs and Immigration Enforcement, known by its acronym as ICE, already has focused on the town, stopping two vans loaded with workers in February and taking several people away. Alonso Leon is a former Woodburn City Council member.

"When I think about the folks in my community who wake up so early to go to work, and now they wake up in the morning to go to work and hope and pray that they don't get pulled over by ICE, to me that's just unacceptable," Alonso Leon said in an interview. Some kids are even afraid to attend school, she said, worried they'll return to empty homes, their parents gone.

On a recent afternoon, students streamed out of Woodburn High School, many chatting in Spanish as they headed for their yellow buses. Four out of five students at the school, which Alonso Leon once attended, are Latino.

"Our Latino students see her as inspirational," said Victor Vergara, principal of the high school's Academy of International Studies. "They see her and think 'We can do that. She looks just like us.'"

Since taking office, Alonso Leon has joined three other Oregon state lawmakers in filing a public records request with ICE to obtain details of enforcement actions, to determine how they have changed.

Among her bills is one that would require Oregon's public universities and community colleges to promote inclusiveness and diversity. Another would prohibit state agencies from contracting with companies that don't prevent sexual harassment and discrimination. The Oregon Trial Lawyers Association said in support of the measure that many workers face on-the-job discrimination, and that the state shouldn't spend taxpayer money with companies that refuse to have policies barring harassment.

Some of Alonso Leon's fellow lawmakers, however, are unhappy about illegal immigration. Republican Rep. Sal Esquivel introduced a bill that sought to repeal a 1987 law that made Oregon America's first sanctuary state. The bill died in committee.

"States need to comply with federal immigration laws," Esquivel said in an email.

On the streets of downtown Woodburn — which resembles a Mexican town in many ways, with numerous taquerias, signs written in Spanish and wall murals — people are excited about Alonso Leon's election.

"We're proud," said Manuel Villanueva, owner of El Forastero, which sells cowboy boots and hats. "She is Latino, and can lower the racism we see."

The possibility of more ICE raids has hurt Woodburn's small businesses because people are reluctant to shop. Alonso Leon and others brainstormed a solution.

"We started 'small business Saturdays' to encourage folks to eat something new, buy something new that they've never tried before," Alonso Leon said. Other politicians have come out in support.

Alonso Leon comes from the Purepecha indigenous people. Hoping for a better life, her family left San Jeronimo, a village in Michoacan state on the shores of Lake Patzcuaro, famous for its fishermen who use butterfly nets from canoes.

In their rented Oregon house, they used an outhouse and got water from an outdoor hose, Alonso Leon recalled. During the winters, they'd fill buckets and bring them inside so the water wouldn't freeze.

"I remember this one winter, it didn't matter if we had saved water because the water we had saved froze anyway inside the house," she said. "Many winters, we kind of huddled up in my parents' bedroom."

When Alonso Leon campaigned for the state House, her materials were in English, Spanish and Russian, with Woodburn also home to Russian Old Believers.

"I feel so much pride," Alonso Leon said, choking up with emotion. "It's such an honor to represent one of the most diverse communities in the entire state."

"Having Teresa in the caucus and in this chamber allows her to give voice to those Oregonians who have been particularly impacted by the immigration rhetoric coming down from the federal administration," Kotek said. "She's doing a great job."

Nationally, at least one situation mirrors Alonso Leon's. Blanca Rubio, who was brought illegally to the U.S. from Mexico as a child, was elected in November to the California State Assembly.

Two other immigrants overstayed visas and became lawmakers after obtaining U.S. citizenship: Isela Blanc, who was also elected in November to Arizona's Legislature, and Adriano Espaillat, who won a seat in New York's Legislature in 1996 and was elected to Congress last year.

"They're as American as everyone else," Vargas said. "And they love the country to the point that they make a sacrifice to serve the public."