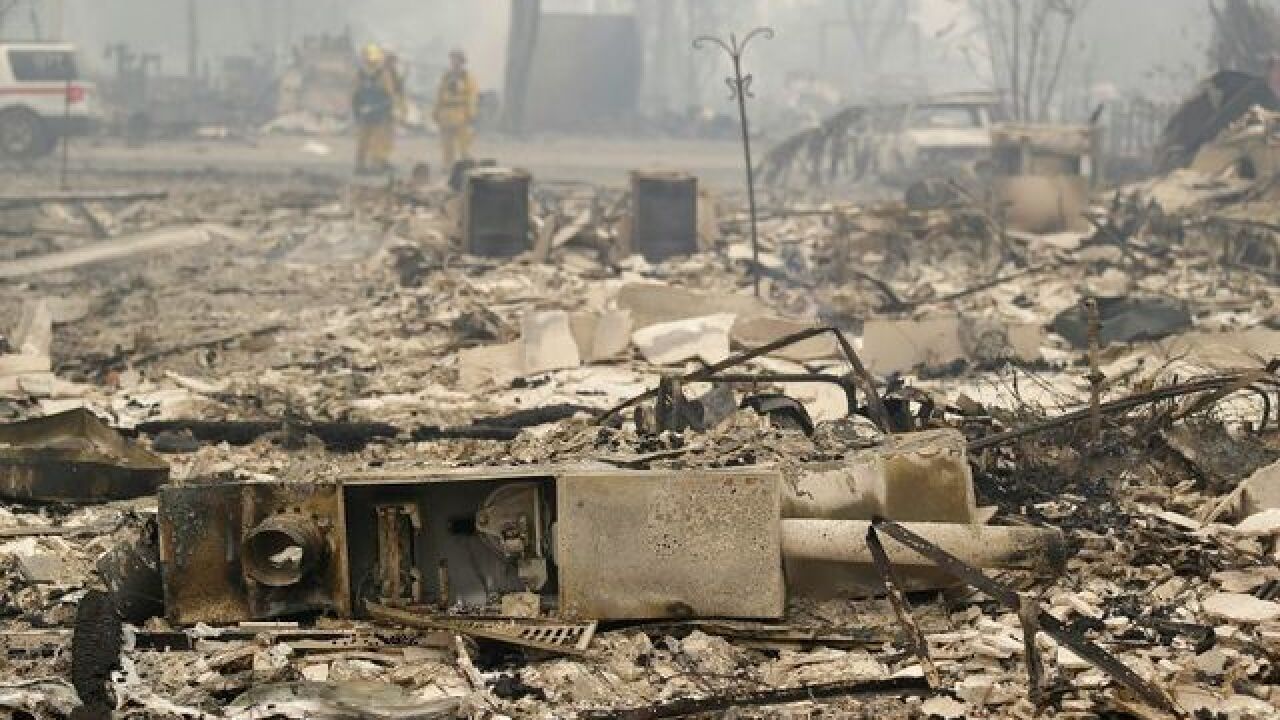 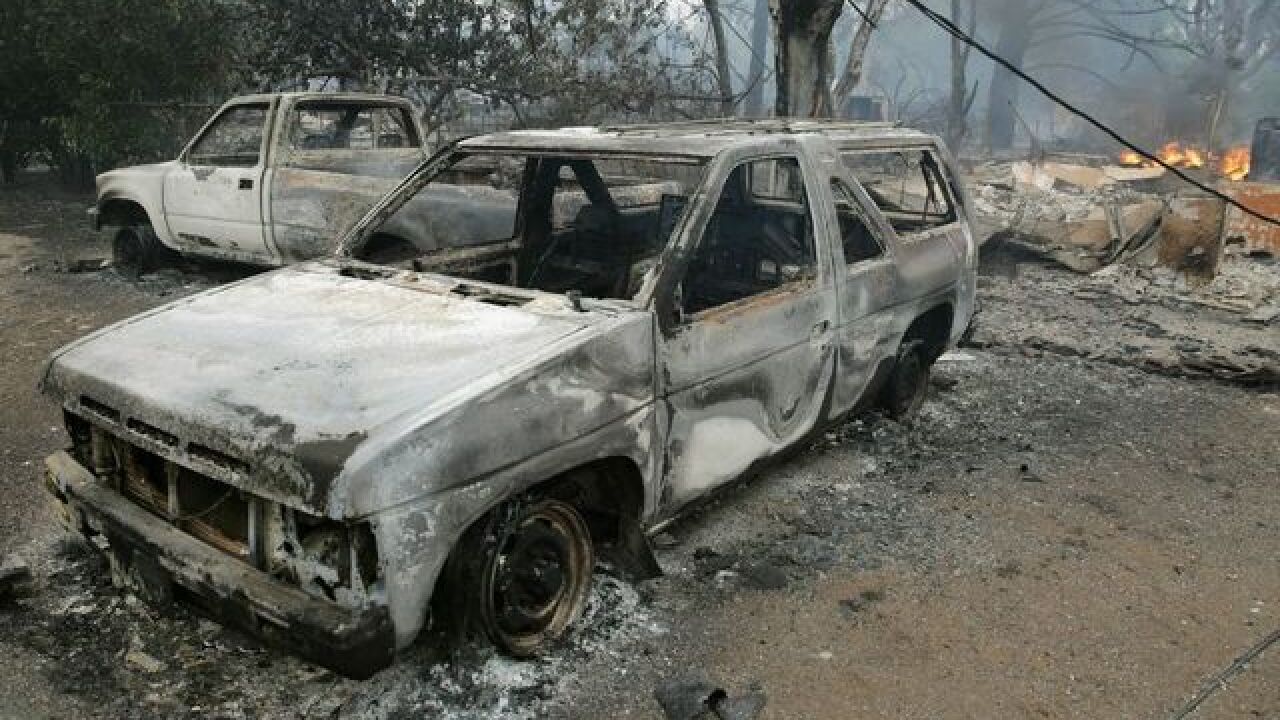 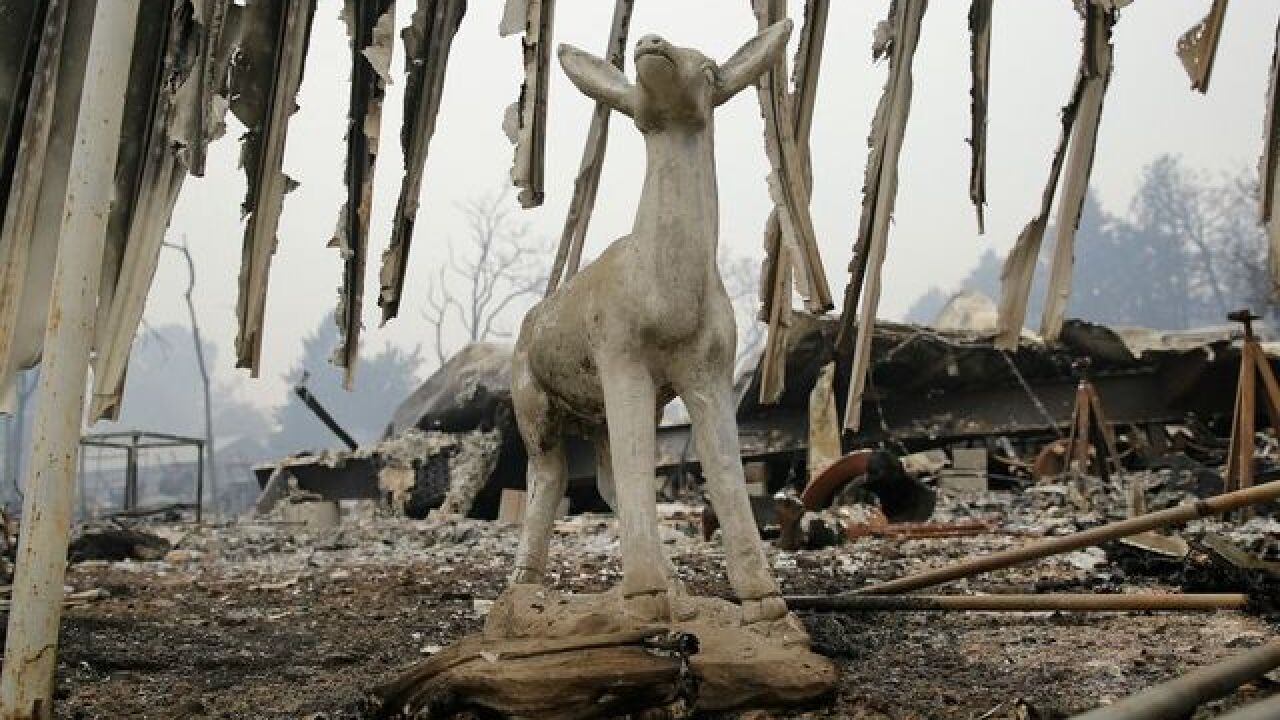 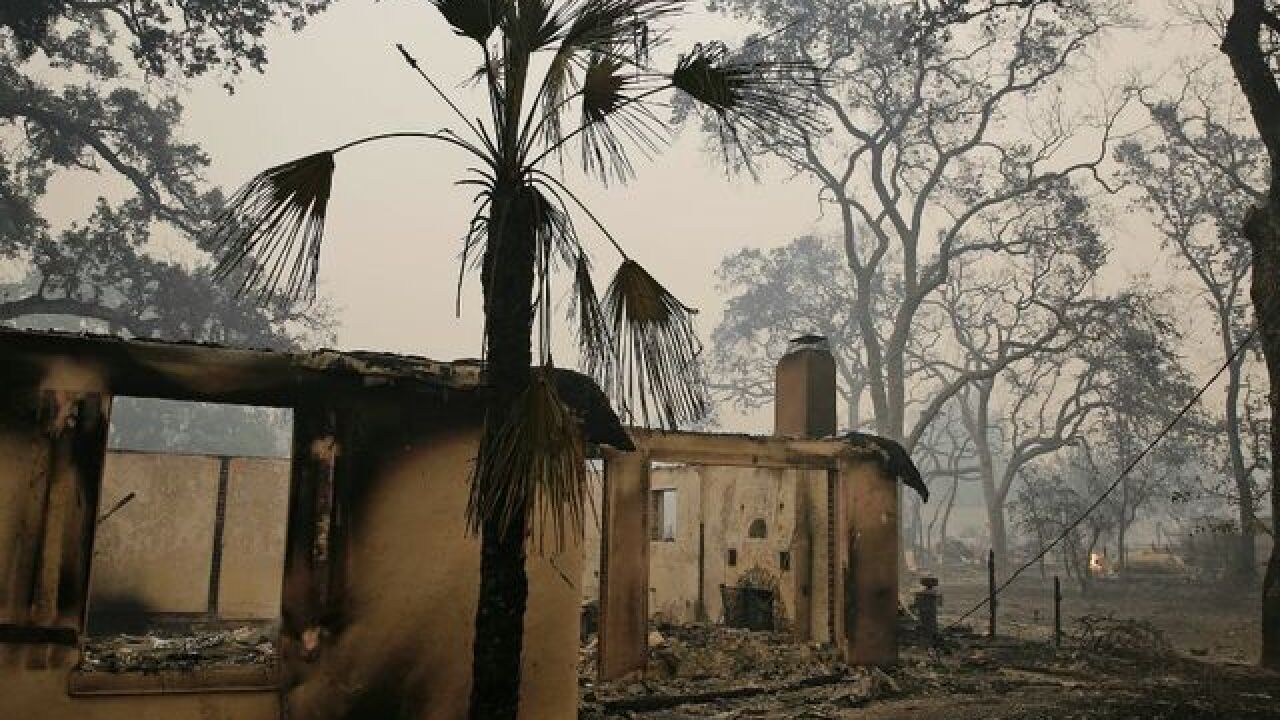 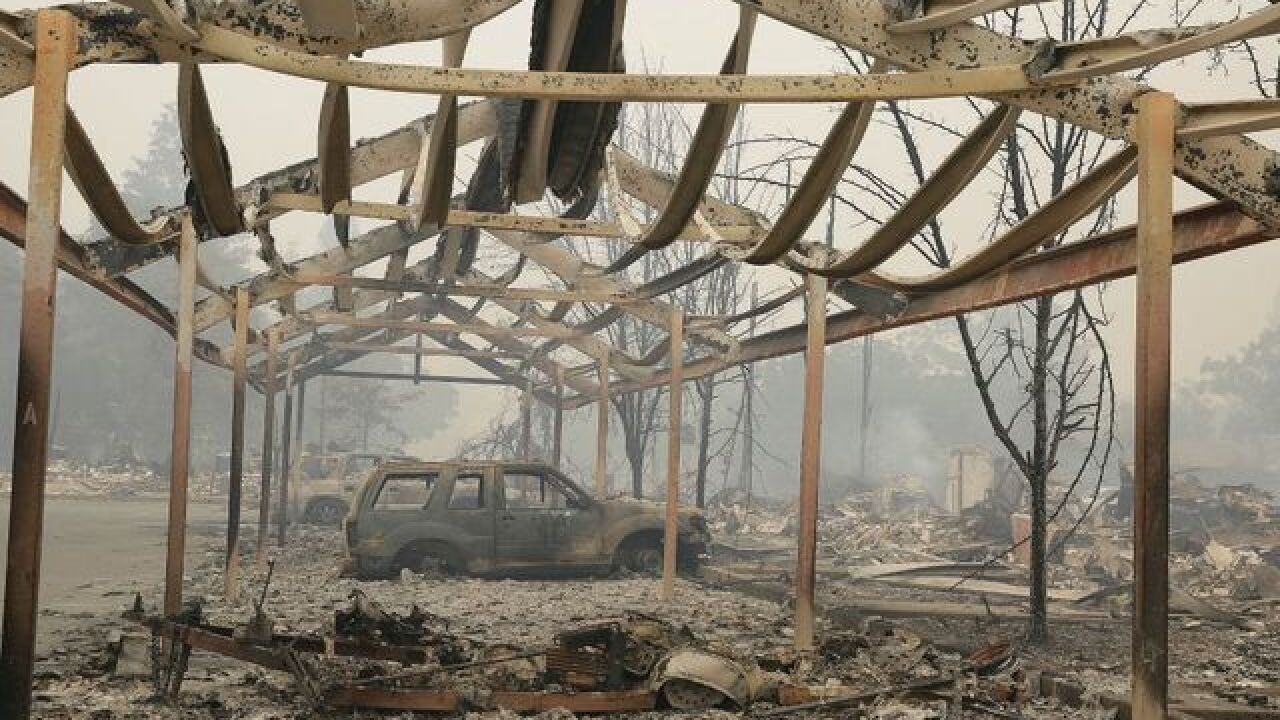 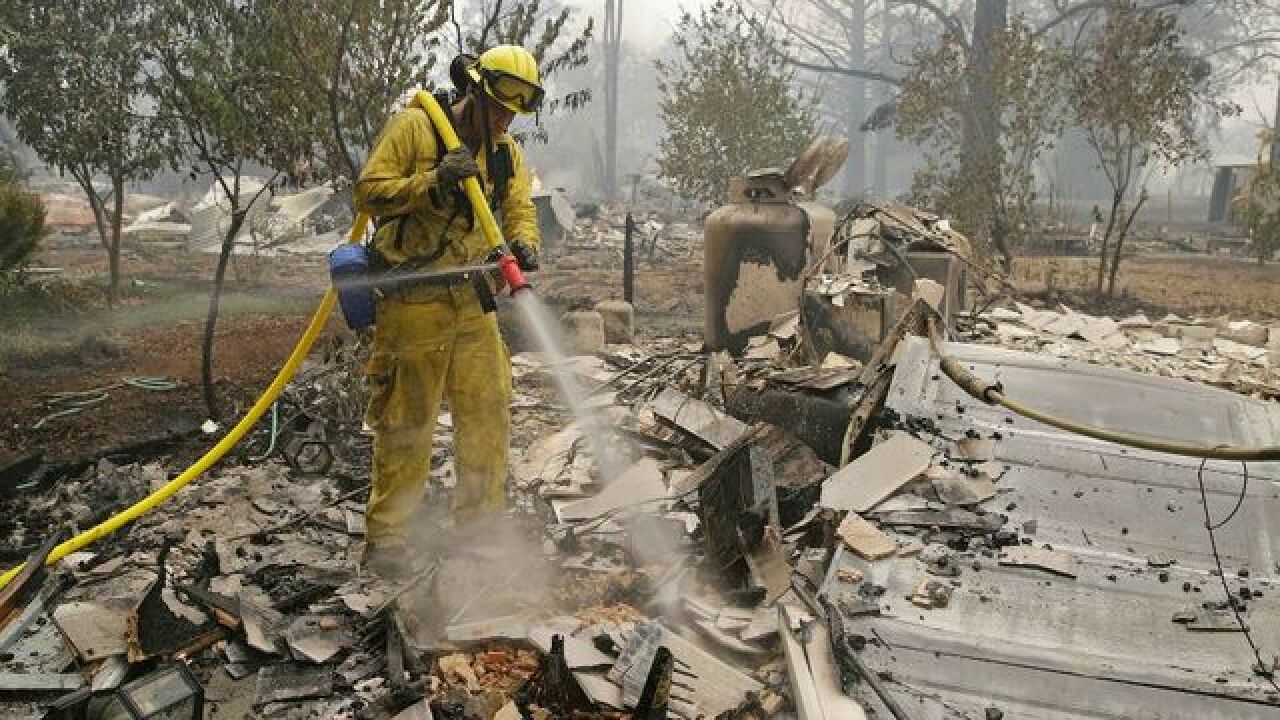 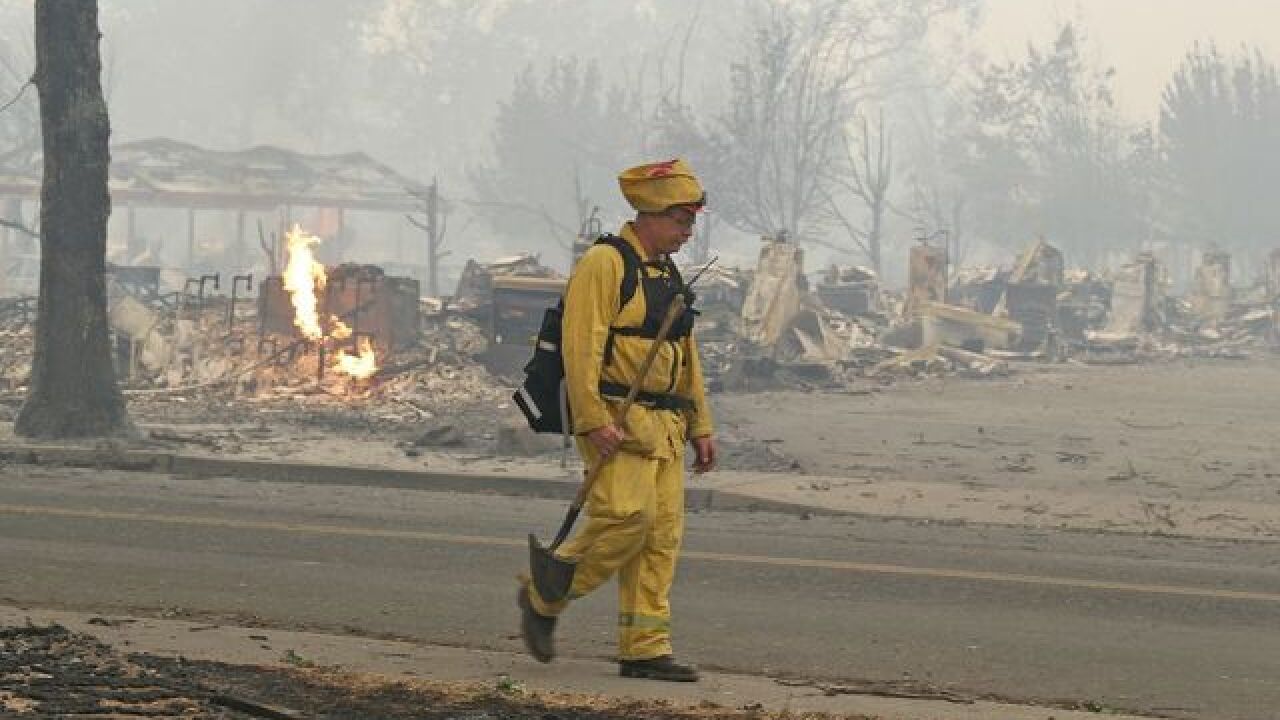 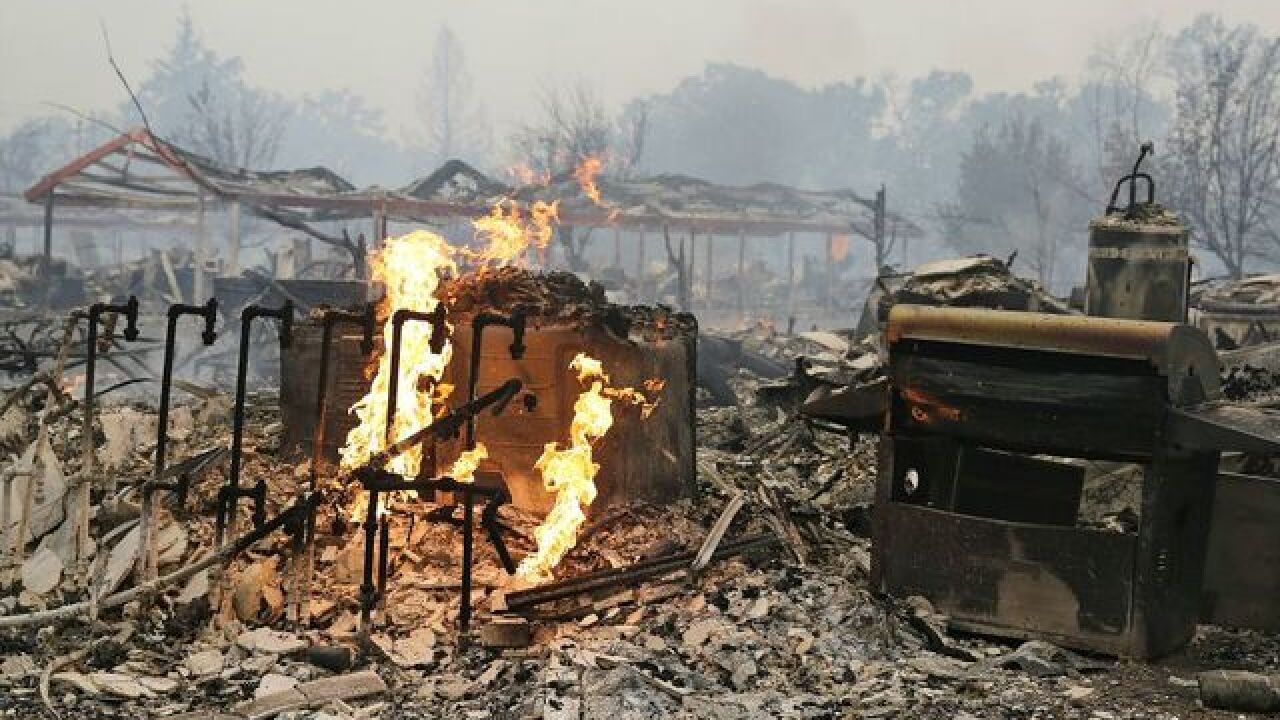 By: ELLEN KNICKMEYER, Associated Press
Posted at 5:47 PM, Sep 13, 2015
MIDDLETOWN, Calif. (AP) — At least 100 homes were destroyed by a wildfire in Northern California's Lake County that raced through dry brush and exploded in size within hours, officials said Sunday. The devastation comes after a separate wildfire to the southeast destroyed at least 81 homes.
California Department of Forest Protection spokesman Daniel Berlant says wind gusts that reached up to 30 miles per hour sent embers raining down on homes and made it hard for firefighters to stop the Lake County blaze from advancing. Four firefighters were injured Saturday while battling the flames.
There's no official tally of the destruction yet because firefighters are focused on new evacuation orders and on residents' safety, he said.
"This has been a tragic reminder to us of the dangers this drought is posing," he said.

People were ordered Sunday to evacuate Clear Lake Riviera, a town with about 3,000 residents, and other areas near the blaze, Cal Fire said.
Residents streamed from Middletown Sunday morning and had to dodge smoldering telephone poles, downed power lines and fallen trees as they drove through billowing smoke.
George Escalona told The Associated Press that parts of his town, including his home, have burned to the ground.
In some areas of town "there is nothing but burned houses, burned cars," Escalano said, adding that he has nothing left but the clothes he was wearing.
The 60-square-mile fire erupted Saturday afternoon and rapidly chewed through brush and trees parched from several years of drought, Cal Fire said. Entire towns as well as residents along a 35-mile stretch of highway were evacuated. Gov. Jerry Brown on Sunday declared a state of emergency to free up resources.
The four firefighters who were injured were all members of a helicopter crew. They were airlifted to a hospital burn unit, where they were being treated for second-degree burns and were listed in stable condition, Berlant said.
Brown had already declared a state of emergency for the separate 101-square-mile wildfire about 70 miles southeast of Sacramento that has destroyed at least 81 homes and 51 outbuildings and turned the grassy, tree-studded Sierra Nevada foothills an eerie white. Fire officials had earlier counted 86 homes destroyed, but issued the new figure Sunday morning.
Crews by Sunday morning had increased containment on that blaze to 20 percent.
The fire, which broke out on Wednesday was threatening about 6,400 more buildings.
"I lost my business — it's all burned up — my shop, my house, 28 years of living," said Joe Thomas, who lives near the community of Mountain Ranch. "I got to start all over. It's depressing."
Thomas, who runs a tractor dealership and repair business, said he and his wife grabbed papers, his work computer, photos and their four dogs. But they left a goat, five ducks, six rabbits and more than 30 chickens behind.
"I turned the pens open and turned them lose. I just couldn't gather them up," he said. "All we want to do is go home. It's miserable."
Meanwhile, new evacuation orders were issued Saturday for the largest wildfire in the state, threatening to sweep through an ancient grove of Giant Sequoia trees. The fire, sparked by lightning on July 31, has charred 201 square miles, the U.S. Forest Service said.
Firefighters cleared brush around the Grant Grove and set prescribed burns to keep the flames from overrunning it. By Saturday, the backfiring and monitoring efforts appeared to have helped protect the treasured trees, the Fresno Bee reported.
The grove is named for the towering General Grant tree that stands 268 feet tall. There are dozens of Sequoia groves in the Sierra Nevada, and some trees are 3,000 years old.
This story has been corrected to reflect that the Lake County wildfire is 60 square miles, not acres. Associated Press writer Olga R. Rodriguez in San Francisco contributed to this story.
Copyright 2015 The Associated Press. All rights reserved. This material may not be published, broadcast, rewritten or redistributed.