The Mid-Coast Trolley Project will expand the Blue Line from downtown San diego into the University City area.

SAN DIEGO (KGTV) - Crews began work Thursday on the next phase of a project to expand San Diego's trolley service.

San Diego Association of Governments (SANDAG) crews were in University City Thursday morning to begin drilling about 100 feet into the ground to make way for viaduct columns on Genesee Avenue.

Once completed, the columns will support the trolley as it runs above-ground over traffic in the congested area.

#MidCoastMilestone: Column hole drilling began today along Genesee Ave, marking the start of construction of the viaduct that will support the Trolley when service starts in 2021. https://t.co/LmnC5aNmMb #video #SanDiego pic.twitter.com/yT0dxYsI5j

"This is one of the areas that has a significant amount of congestion," said SANDAG Director of Rail John Haggerty.

Haggerty is leading the Mid-Coast Trolley Project and has been waiting for this day for years.

"We'll be able to move people in and out of the area without impacting the flow of traffic on the street," he added.

By the end of construction, the project will look like a bridge going over traffic, similar to one currently in Mission Valley. 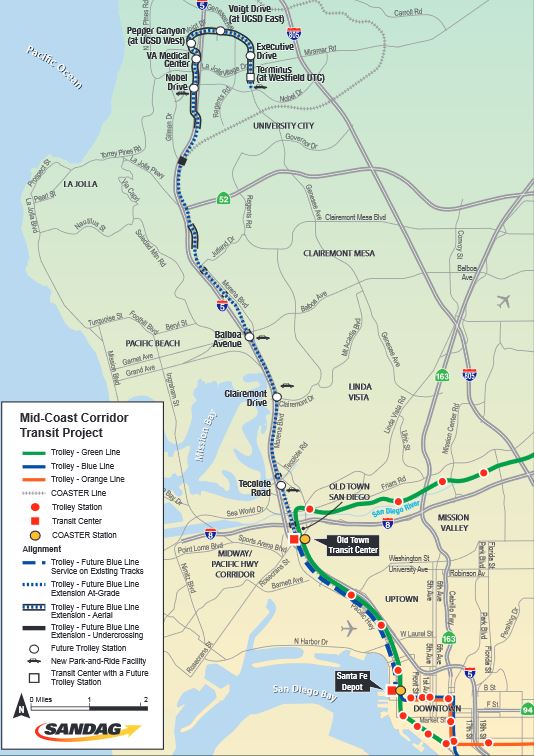 SANDAG crews previously expanded Genesee Avenue to make sure construction wasn't too disruptive for those who live and work in the area. But, they said it will still be an inconvenience for drivers while construction is underway.

SANDAG hopes by the end of the project it'll be worth the wait when drive times are cut and there's relief on the congested streets.

"It will be disruptive; it's a significant project, but we're doing everything in our power right now to make sure that we keep traffic flowing that we keep access to businesses, and that we keep people doing what they do on a normal basis," said Haggerty.

The project is funded by SANDAG and the Federal Transit Administration's New Starts Program.

Service is expected to begin in 2021.