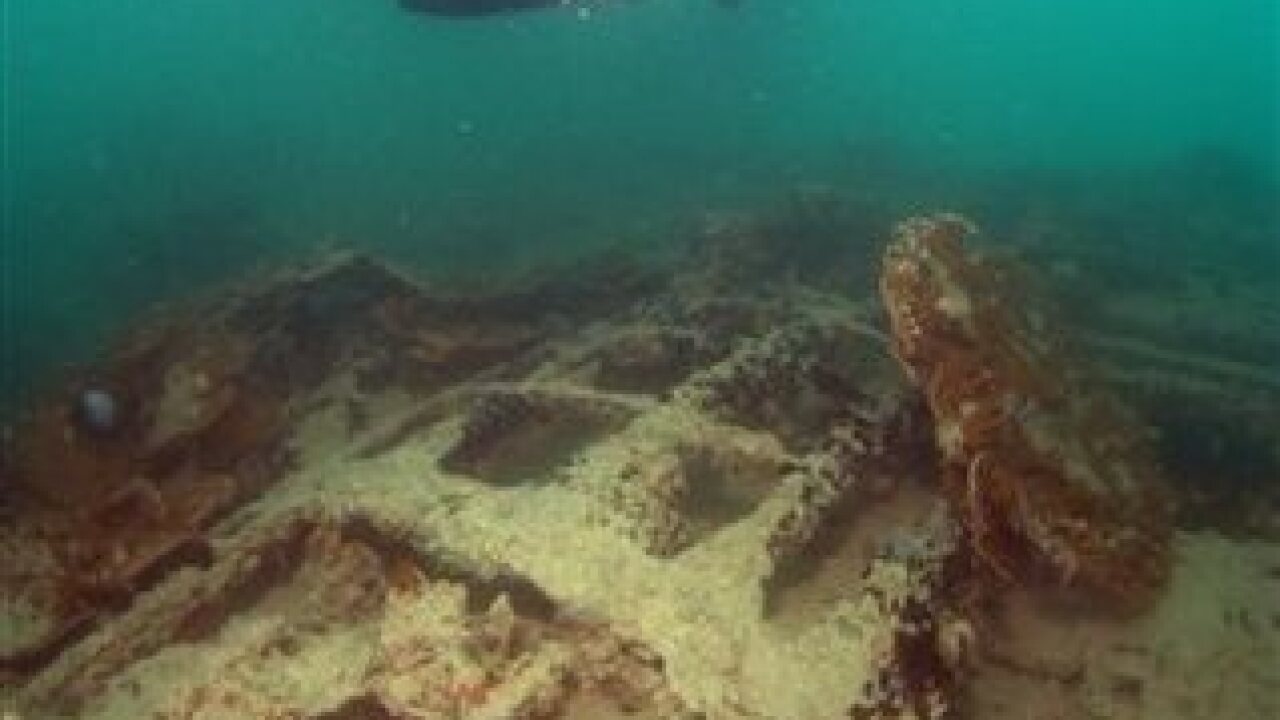 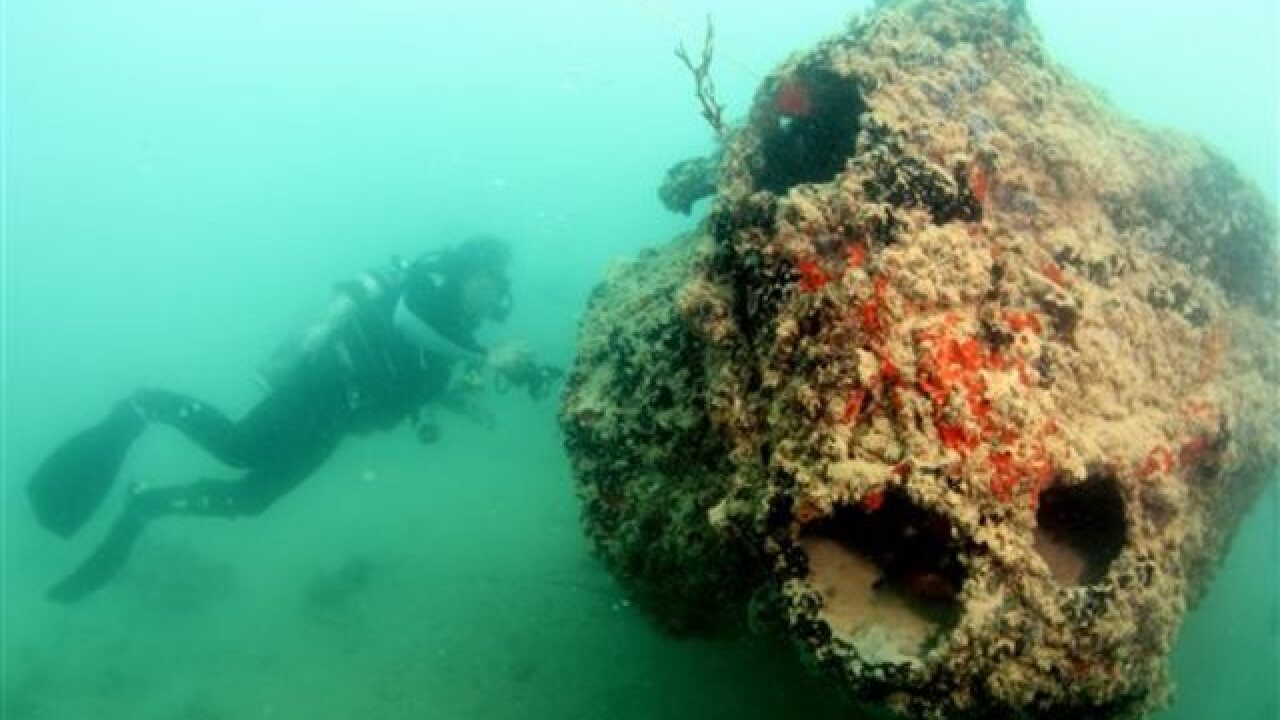 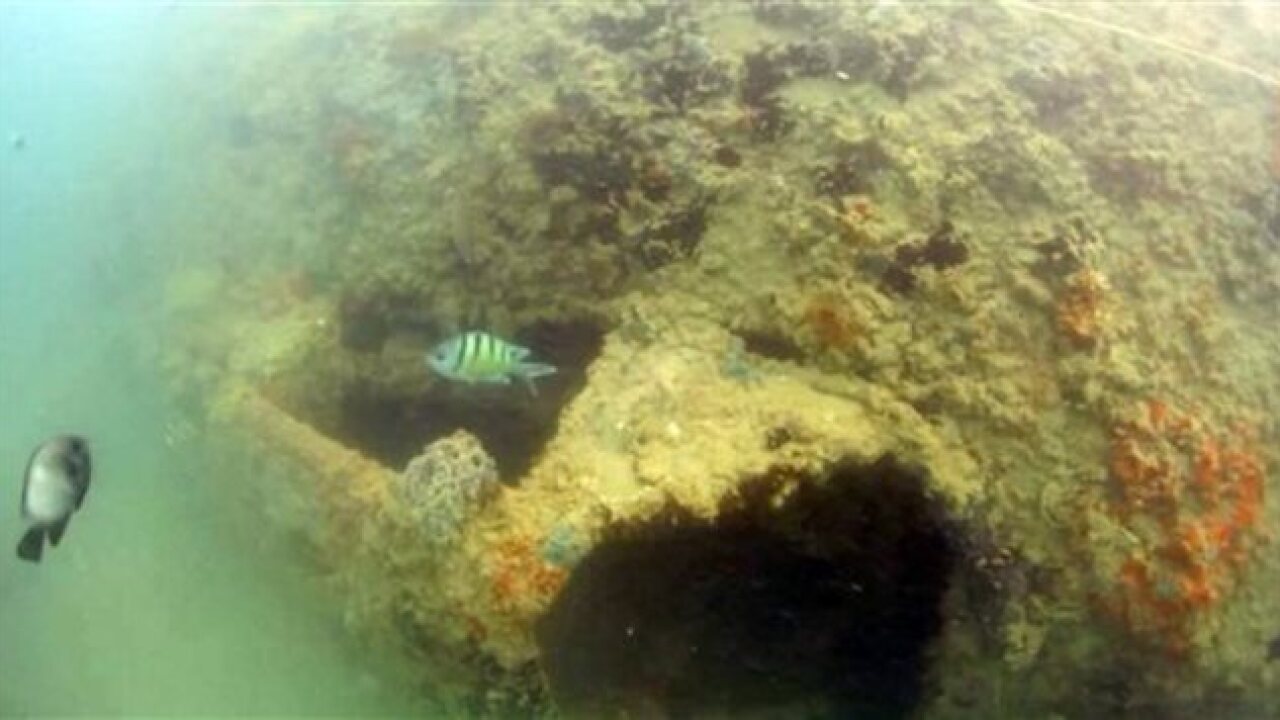 By: Audrey McAvoy, Associated Press writer
Posted at 7:17 AM, Dec 07, 2015
HONOLULU -- New images of a large U.S. Navy seaplane that sank in Hawaii waters during the Japanese attack on Pearl Harbor show a coral-encrusted engine and reef fish swimming in and out of a hull.
The video and photos are the clearest images taken of the Catalina PBY-5 wreckage to date, said Hans Van Tilburg, a maritime archaeologist with the Office of National Marine Sanctuaries.
The site isn't publicly accessible, so the images allow scientists to share the wreckage with others. They also help with documenting a historically significant wreck over time.
The seaplane had a wing span of 100 feet, about comparable to a modern-era Boeing 727 commercial jet. It now sits in pieces 30 feet below the surface in Kaneohe Bay next to a Marine Corps base, about 20 miles east of Pearl Harbor on the other side of Oahu.
There were an estimated six of these planes — also called "flying boats" — in the bay at the time of the attack, but Van Tilburg said nobody is sure what happened to the others.
The base, which was then a naval air station, was among several Oahu military installations attacked by Japanese planes on the morning of Dec. 7, 1941.
Van Tilburg said a mooring cable is still attached to the plane, but there are signs someone started the port engine before the plane sank. This indicates a crew may have died while attempting to take off as the aerial assault began.
The Catalina PBY-5 could hold an eight-man crew, and four 500-pound bombs.
Standard practice was to keep someone on the seaplanes at night to make sure the aircraft didn't drift off. There were aviator casualties in the water, but it's not known which planes they were on or when they got off, Van Tilburg said.
"That's one of the mysteries of the story," he said.
The seaplanes would have been priority targets because they could fly as far as 2,000 miles and would have been able to follow Japanese planes back to their aircraft carriers, Van Tilburg said.
Van Tilburg said the plane is a battlefield casualty, just like better-known counterparts like the USS Arizona and other vessels bombed in Pearl Harbor. Van Tilburg said Friday he imagines commanders rightfully assumed the plane was a total loss and not worth salvaging.
There's been no "dedicated discussion" to retrieving the plane, which is currently in three large pieces, he said. It would cost a great deal to stabilize it and bring it ashore.
The aluminum and other metals may leech over time, but that fact must be balanced with habitat the plane provides for fish and other marine life, Van Tilburg said. The site has become a living reef, he said.
The wreck helps tell the story of what happened at Kaneohe Bay, where 18 sailors and two civilians were killed. Sixty-nine others at the base were injured.
More than 2,400 sailors, Marines, soldiers and civilians were killed across Oahu in the Japanese attack.
Associated Press 2015