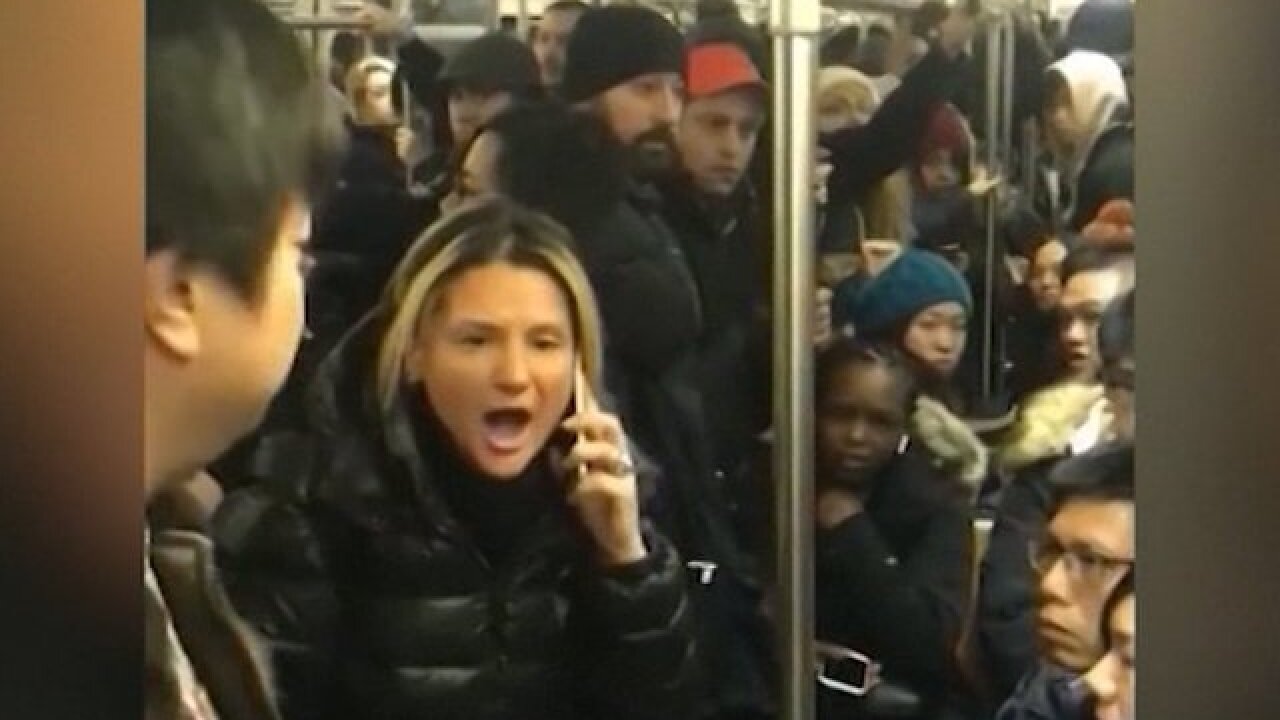 © 2018 Cable News Network, Inc.
NYPD
<p>A Brooklyn woman whose racist, profanity-laced tirade on the New York subway was captured on video this week has been charged with felony assault after she struck a fellow passenger, authorities sai</p>

A Brooklyn woman whose racist, profanity-laced tirade on the New York subway was captured on video this week has been charged with felony assault after she struck a fellow passenger, authorities said.

The dispute between Anna Lushchinskaya, a 40-year-old white woman, and the 24-year-old passenger, a woman of Asian descent, began after Lushchinskaya bumped into the woman early Tuesday, the New York Police Department told CNN.

Lushchinskaya yelled profanities at the victim on the northbound D train, hitting her with an umbrella and keys, the NYPD said. On video captured by witnesses, Lushchinskaya can be heard calling the woman a racial slur.

Lushchinskaya was apprehended at the 36th Street Station and arrested, the NYPD said.

CNN could not reach Lushchinskaya or her attorneys for comment Friday.

Lushchinskaya was arraigned in Kings County Criminal Court following the incident, according to Brooklyn District Attorney spokesperson Oren Yaniv. She pleaded not guilty and posted $1,000 cash bond, according to court records.

She is due back in court January 22.

The victim suffered cuts to her face, the NYPD said. She told CNN affiliate WABC, which said she wanted to remain anonymous, that she was grateful people intervened.

A 30-year old good Samaritan suffered scratches when he intervened, the NYPD said.

Several subway riders captured the tirade on video. The incident has since been viewed by millions of people on social media.

The video shows the woman yelling profanities at the victim and calling another rider "retarded."

"F*** off," Lushchinskaya allegedly said several times before striking the victim with her hand.

She then took off her sunglasses and gloves, pulled her hair back and took her umbrella and keys from her bag, according to the video. Then, she began kicking the woman, who defended herself.

Passengers intervened, trying to restrain Lushchinskaya, and told her to stop. One person threatened to call the police.

The video shows Lushchinskaya striking the woman several times with her umbrella and her keys and again kicking her.

"She's not even fighting you back," one person is heard saying.

At least two subway riders tried to wrestle the umbrella away.

Lushchinskaya is seen spitting in the direction of the victim before yelling more profanity and a racial slur.

Juan Ayala, who was filming the incident, said he decided to intervene, but Lushchinskaya lashed out at him. A video posted by another user shows Ayala talking to Lushchinskaya.

"Do not spit at me," Ayala says in the video, to which Lushchinskaya replies, "What are you, her attorney? F***ing Mohammed."

The subway car erupts in a gasp and Ayala gives his reply: "What? B****, I'm Dominican!"

The victim told WABC she felt lucky the woman didn't have a weapon like a gun or a knife "because it could have got a lot worse."

This is Lushchinskaya's second arrest this year for a subway altercation -- both took place at the 36th Street Station in Brooklyn. In June, she was arrested for allegedly pepper spraying a man and woman, according to DCPI detective Sophia Mason. Both were Hispanic. She was charged with harassment, menacing with a weapon and attempted assault.